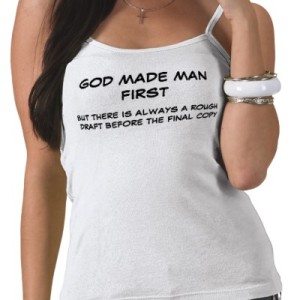 Look deeply and you will see that the Torah does not know of man and woman as separate beings. Each act is performed once through a single body—a body that in our world may appear as two, but which the Torah sees as one.

On the contrary, for both to do the same mitzvah would be redundant, for why should one half of the body do what the other has already done?

They are a single whole, whether they know of one another or not. Where does a woman put on tefillin or wear tzitzit? On the body of her male counterpart.

Today’s “Morning Meditation” is an extension of yesterday’s blog post albeit a more optimistic one. Each day brings its own surprises from Hashem though in my human frailty, I sometimes appreciate some more than others.

Yesterday morning, I was feeling the sting of disagreement with my wife and daughter but later in the day, God showed me reconciliation. Yes, the disturbance in our peace was minor, but that doesn’t mean it was welcome.

Rabbi Freeman had something interesting to say for this morning’s meditation, but before I talk about that, I want to show you what the Master has to say on the subject:

“Haven’t you read,” he replied, “that at the beginning the Creator ‘made them male and female,’ and said, ‘For this reason a man will leave his father and mother and be united to his wife, and the two will become one flesh’? So they are no longer two, but one flesh. Therefore what God has joined together, let no one separate.” –Matthew 19:4-6

This teaching uses Genesis 1:27 and 2:24 as its source and most of the time, we blow past “and they become one flesh” and assume this is just poetic language, but look at what Rabbi Freeman is saying in the above-posted quote.

We are two and one in the sense that what the one does, for good or bad, completely affects the other. If a Jewish man obeys the commandment to pray wearing tzitzit (Numbers 15:38; Deuteronomy 22:12) and tefillin (Exodus 13:9; Deuteronomy 6:8), it is as if his wife fulfilled those commandments. If the wife fulfills a different mitzvah, it’s as if her husband did so as well. For those of us who aren’t Jewish, it is the same. When one of us relates to God in any way, it’s as if the spouse has done so as well. This may be what Paul meant here:

To the rest I say this (I, not the Lord): If any brother has a wife who is not a believer and she is willing to live with him, he must not divorce her. And if a woman has a husband who is not a believer and he is willing to live with her, she must not divorce him. For the unbelieving husband has been sanctified through his wife, and the unbelieving wife has been sanctified through her believing husband. Otherwise your children would be unclean, but as it is, they are holy. –1 Corinthians 7:12-14

I know Rabbi Freeman’s comments could be interpreted as rather “sexist” excuses for why men are required to wear tzitzit and tefillin but not so women, yet we see that even the Apostle Paul defined man and woman as equal under the Master’s grace and yet not alike in form and function (Galatians 3:28). It’s important to extend ourselves beyond modern understanding and try to see God’s intention for making man and woman different in from each other and yet “one flesh”. This is a closeness and intimacy that cannot be found in any other relationship, even between parent and child. This is what we seek when we join ourselves to God. Marriage is the physical realization of our spiritual aspirations.

While husbands and wives don’t always “feel” their oneness together, when they do; when we do, it is like a miracle of God and gratitude is the spontaneous result. We see God’s miracles everyday.

We find in today’s daf that it is possible to obligate oneself to bring a korban todah. This person understands that everything he has is from Hashem and he is filled with gratitude. Daily miracles are no less than a miraculous recovery from illness, escaping a dangerous situation or the like.

But how can one attain a deep appreciation that everything is a gift from Hashem? The Alter of Kelm, zt”l, explains this in depth. “It is very difficult feel hakaras hatov to Hashem since we do not see Hashem’s kindness with our physical eyes. It is only with the mind’s eye that one understands what Hashem is always doing for him. Our first task in feeling gratitude is to undergo an inner transformation. Our intellectual understanding that we must have hakaras hatov must become our deep inner feeling. The more we work to strengthen our feelings of hakaras hatov, the stronger our appreciation will become. Eventually we will begin to recognize the myriads of kindnesses which Hashem does for us at all times.

“But there is a powerful way to develop hakaras hatov. As everyone knows, the reason for berachos—those that we say before partaking of something or those that serve to praise Hashem afterward – help us to focus on what Hashem has given us and expressing thanks for His kindness. A wondrous way to attain hakaras hatov is by focusing on saying berachos with full attention so our hearts are attuned to what we are saying.

“Since our entire day is laced with berachos, it becomes easy for us to acquire hakaras hatov. Each blessing recited carefully helps our awareness of gratitude penetrates deeper and deeper, until we come to truly feel gratitude for everything that Hashem has done for us. Truly a wondrous way to work on this trait!”

In reading this, I wonder why there isn’t a blessing thanking God for our spouse and our marriage.

We’ve seen in the news recently how, when marriage goes terribly wrong, especially with a couple in the public eye, it seems to invalidate the “sanctity of marriage” as instituted by God and make way for interpretations of “marriage” that God never intended (Leviticus 18:22; Romans 1:27).

However, there is a difference between God’s desires for men and women and what human beings do with their will and their desires. I previously quoted Rabbi Freeman in another of his commentaries on marriage and how a man and a woman must be different in nature and character in order for the two to effectively and productively become one. In order for marriage to be marriage, the “one flesh” must be one man and one woman:

When the Infinite Light emanated a world, It did so with two minds, two states of consciousness. One mind sees from above to below—and so, all is insignificant before it. From above to below, there is no world, only One.

At the nexus of these two minds, at the crux of their paradox, there shines the very Essence of the Infinite Light.

The first mind descended into man; the second into woman.

That is why the man has the power to conquer and subdue, but he lacks a sense of the other.

That is why the woman feels the other. She does not conquer, she nurtures. But her light is tightly constrained and so she is full of harsh judgments.

As they bond together, the man sweetens the judgment of the woman and the woman teaches the man to feel the other. And in that union shines the very Essence of the Infinite.

While it can be frustrating and even disillusioning to encounter the differences in your husband or wife, how they see the world in a separate way and how that separateness can contribute to disagreements and strife, a marriage needs those two radically different lenses in order to bring God into focus.

If you have no “other”; no partner in life, everything I’ve said up until now probably seems unfair, but people were not made to be alone. The man Adam was not truly satisfied with his lot in life until God made Eve (Havah), a helper; a woman suitable for him (Genesis 1:20-22). I’ve been married for 28 years and my relationship with my wife continues to see challenges. We continue to frustrate each other and upset each other from time to time. Sometimes it seems like life would be easier if we were apart. And then God reminds us why He joined us together.

Then our lives become glorious all over again when God sees the two of us as one.