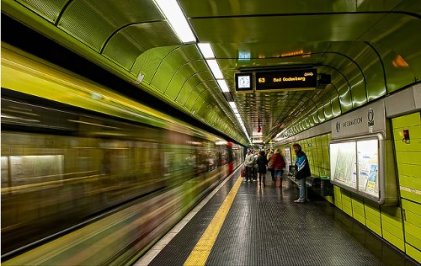 Our generation has changed an amazing amount from earlier generations. In earlier times the only people who ate quickly were bandits or people in an unusual rush for one reason or another. Nowadays, we are in the era of “fast” foods. Mealtime is not nearly as formal as it once was for the vast majority of people.

Not surprisingly, when someone first learns the halachos on today’s amud he gets a big surprise. “One who leaves one domain needs to recite a new blessing?” he wonders. “What if I have something in my mouth and as I am running I leave the first domain? Do I have to remove it from my mouth and make a new blessing?”

When someone asked a similar question to Rav Chaim Kanievsky, shlit”a, he ruled decisively. “Even a child who has a candy in his mouth and rushes out of the domain where he made the blessing must take it out of his mouth and make another.”

On a different occasion, Rav Chaim confided that such a case had actually happened to him. “When I was a child the Chazon Ish once noticed that I rushed out of the house with a candy in my mouth. When I came back in—with the candy still ensconced in my mouth—the Chazon Ish called me over to him. He explained the halachah of changing domain. ‘You need to take the candy out of your mouth and make a new berachah every time you leave a domain,’ the Chazon Ish explained.”

First of all, I don’t do this. Secondly, I’m not telling you to do this. That’s not my point. My point is the speed at which time or rather, the events of our lives rush past us. It’s like standing on a commuter platform waiting for the train that will take you to work to stop, only to watch is pass by just inches from your nose at 70 miles per hour.

What the heck just happened?

Yes, we live in a streaming video, microwave dinner, high-speed Internet world where everything we want and need (or think we do) is delivered super-duper fast, and if it isn’t we want to know why.

I’ll try to keep this short since I’m sure this has all been said many times before and I’ll just sound like some old duffer longing for “the good ol’ days.”

Did God design us to run at such a high-speed? Are we supposed to rush around from this event to that from birth to death, never stopping to figure out what we’re supposed to be doing in-between?

I’m just like you. I wake up too early, hit the gym for an hour, wolf breakfast down my throat, speed off to work, often working through lunch, hit the road for the evening commute, grab dinner while reading the news on the web, write or edit something, pick up or drop off someone somewhere, maybe watch a little mindless entertainment, flop in bed, get too little sleep, start all over again.

The Digging with Darren blog just retweeted (on twitter) an older topic called Daily Disciples of a Disciple which in which the “tweet” contained the words, “Does your schedule make room for discipleship?”

What’s important to you? What will you slow down for so you can take your time, pay attention, and truly experience the moment?

I mean besides TV, video, gaming, or similar activities.

While the various Rabbinic rulings and judgments take a lot of harsh abuse in Christianity and sometimes in Messianic Judaism, in some cases, I can see the point of the Sages. It may seem rather tedious and unnecessary to recite a new blessing when you leave one domain for another, but even if you choose not to do so, it teaches a lesson. If you had to slow down between point A and point B, what would you pay attention to? Would slowing down for a few seconds carry its own value? Would you have a few moments to remember God and maybe even talk to Him?