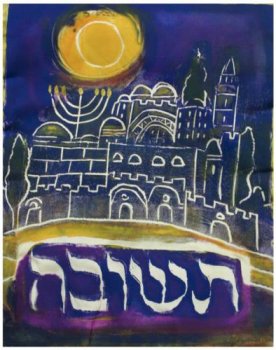 Therefore my judgment is that we should not trouble those of the Gentiles who turn to God…For it has seemed good to the Holy Spirit and to us to lay on you no greater burden than these requirements: that you abstain from what has been sacrificed to idols, and from blood, and from what has been strangled, and from sexual immorality. If you keep yourselves from these, you will do well.

After presenting the proof text, James placed Simon Peter’s decision before the council. He declared, “It is my judgment that we do not trouble those who are turning to God from among the Gentiles.” That is to say, “We should not require circumcision and conversion as the criteria for salvation.” James referred to the God-fearing believers as those “turning to God from among the Gentiles.” The word “turning” corresponds to “repentance.” The Gentile believers responded to the gospel message, “Repent, the kingdom is near.”

The decision exempted the Gentiles from circumcision and the particular commandments that pertain specifically to Jewish identity. It prohibited the Jewish believers from forcing those issues on Gentiles. Nevertheless, the apostles did not forbid the Gentiles from voluntarily participating in the Sabbath, the dietary laws, or any aspect of Torah-life.

This is a continuation of the “Return to Jerusalem” series and I recommend that, unless you’ve done so already, you read part 1 through part 3 before continuing here.

We’ve seen the problem of whether or not Gentile disciples of Jesus should be compelled to convert to Judaism and conform to the full yoke of Torah brought before James and the Jerusalem Council. Each side of the debate has made its case and it appears that the testimony of Peter and his experiences with the Roman Cornelius and his household (see Acts 10) have weighed the debate heavily in one direction. James has presented Amos 9:11-12 as his proof text for allowing Gentiles to receive salvation and access to the Messianic promises without converting to Judaism and in accordance with Peter’s position on the matter.

And now we see what James is going to do about it.

For the Jewish disciples and apostles, the crux of their argument was if or how the Gentiles were to be admitted into discipleship. Should they convert and take on the full yoke of Torah or be allowed to remain Gentiles (not convert) and perhaps follow some other or abridged set of behavioral standards? It was the mechanism for admission that was the point for them, not whether or not Gentiles could/should follow the Torah.

However, I’ve received some comments lately on the earlier parts of this series about whether or not we non-Jewish disciples are obligated to the full list of Torah mitzvot (and arguably, all or much of the subsequent Rabbinic commentary on just how one performs the mitzvot) based on Acts 15 among other New Testament scriptures. Further, the question of whether or not the Jerusalem Council “cancelled the Torah” for Gentile and Jewish disciples of Jesus came up. To me, and especially after reading Lancaster, this is a no-brainer, but I keep forgetting that for most Christians, this raises a tremendous conflict in terms of what they’ve (we’ve) been taught (and as you can tell from my writing, I don’t always think like most Christians).

But I want to continue with my review/analysis of Lancaster’s Acts 15 commentary because I think it has a lot to say to both believing Gentiles and Jews. I won’t say that I believe every word Lancaster writes is undying Gospel (you should pardon the expression), but I do think we should take a serious look at what he says and see if there’s merit in what he’s teaching. I think we can learn much.

For instance, while Lancaster has said that Gentile believers are not obligated to the full yoke of Torah, and especially those mitzvot that have to do with Jewish identity (since they aren’t going to be converting to Judaism), he also says that “the apostles did not forbid the Gentiles from voluntarily participating in the Sabbath, the dietary laws, or any aspect of Torah-life.” But then how are we to separate Gentiles being limited to voluntarily participating in only certain elements of “a Torah-life” and “any aspect of Torah-life?”

I’ll address the specifics of what Lancaster defines as “Torah-life” for the Gentile later parts of this series. That said, Lancaster does give us a bit of a picture of what the “early Christians” were up to relative to the Torah, and maybe even a beginning of the answer to the question I just asked.

The God-fearing Gentile believers of the apostolic era were more Torah observant than most Messianic believers (Blogger’s note: or traditional Christians) today. They worshipped in synagogues in the midst of the Jewish community. They had no other days of worship or holidays other than those of the synagogue. They did not drive vehicles to get to their place of fellowship. To share table-fellowship with Jewish believers in the community, they maintained the biblical dietary laws. For all practical purposes, they looked Jewish already.

To support this claim, Lancaster quotes from Le Cornu’s and Shulam’s “A commentary on the Jewish Roots of Galatians” (Jerusalem, Israel: Akademon, 2005), 835:

This principle has obvious bearing on the language of “troubling” and “burdening” the Gentile believers. James’ ruling for the “majority” of the Gentiles who are now turning to God through Jesus: The Jewish community in Jerusalem will not impose anything on them which they will not be able to bear as a whole. This does not preclude their taking upon themselves additional observances according to their respective abilities and desires.

This lends a great deal of support to Lancaster’s and FFOZ’s position on Gentile Christians and the Torah. While obligation to all of the mitzvot is not imposed on the Gentile disciples as a whole, individuals among the Gentiles may choose to follow the path of Torah more fully and to varying degrees.

I’m going to skip over the “Four Essential Prohibitions” until next time and focus on how the Torah in general is applied to Jewish and Gentile believers. We see that, according to Lancaster and the Jews present at this debate, it was abundantly clear that Gentiles, if they do not convert to Judaism, are not obligated to the full yoke of Torah as a group. But what about the Jews? Did James really abolish Jewish observance of Torah in one fell stroke?

The apostles agreed that Gentile believers did not need to undergo circumcision and full obligation to the Torah as Jews. The obvious corollary requires that Jewish believers are obligated to observe the Torah. The thought that a Jewish believer might also be exempt from the whole yoke of Torah did not enter the minds of the apostles.

Traditional Christian interpretation, however, often assumes that Acts 15 releases both Jews and Gentiles from keeping the Torah’s ceremonial laws of circumcision, Sabbath, calendar, dietary laws, etc. On the contrary, the entire argument of the chapter presupposes that those obligations remain incumbent on the Jewish believer.

Lancaster then finishes off this point by citing some (to Christians, anyway) rather unusual authorities: both a believing Jewish commentator from the 19th century and two unbelieving Rabbis from the 15th and 18th centuries who also wrote scholarly opinions (amazingly enough) on Acts 15. For the full content of their writings as presented in the Torah Club, I encourage you to purchase Vol. 6, but I will briefly quote one source.

And it is forbidden for us to say: “If we have the righteousness of the Messiah unto eternal life, why do we need to observe the Torah, if this is not required for eternal life, for we are only saved by faith?” We are forbidden to speak this way, for who are we to annul it? The Messiah was not made the servant of sin. This is similar to what the Christians said: “Why do I need any longer to give alms to the poor or to do any other good deed, according to the New Testament? Is not my faith enough for me?” It is forbidden to speak like this, for he is a sinner who closes his fist, and the Messiah was not made the servant of sin. Therefore faith does not benefit him, as it says in the epistle of James 2:13, 1 John 3:3, and Paul himself in Romans 6:15. And James says (4:17): “One who knows to do good and does not do it, it is a sin for him,” for the omission is a sin. For when he repents and regrets the wickedness of his heart, then the faith by its power saves him, as Paul also says in Acts 26:20: “Return to God and perform deeds in keeping with repentance.” Then the faith is beneficial.

I am positive that this is the single most difficult message from Acts 15 for the vast majority of Christians to absorb. We have been taught that when it says Jesus is the goal of the Torah, it means the finale as opposed to the “gold standard” of obedience to God that the (Jewish) believers were to unservingly strive for. It is extremely acceptable to most Christians that we in the church are not subject to the “slavery” of the Law, but to believe that any Jewish person who is also a believer continues to be obligated to the Torah teachings is almost too much for us to bear.

I admit that given the scope of Lancaster’s commentary and the limitations of my already lengthy summary of his work, that I cannot indisputably prove that Gentiles have no obligation to Torah while Jews still do (although I think the point regarding Gentiles and Torah is reasonably well made). But in my meager attempts at study and to try to put myself in the place of the people witnessing the council debate this hotly contested (both then and now) issue, I think that Lancaster has made a good case for his conclusions. Again, space and time limitations prevent me from offering a more complete analysis and I don’t want to simply transcribe two weeks of Torah Club lessons into my blog (I’m already guilty of replicating a large portion of the two Acts 15 teachings from TC Vol. 6). Again, if you want to read the entire content of the work supporting these conclusions, you’ll have to consult the Torah Club Volume 6 lessons.

The remainder of this series will address the “Four Essential Prohibitions” and what they mean for Gentile believers, both in ancient and modern days. That’s where we’ll start in Part 5 of “Return to Jerusalem.”