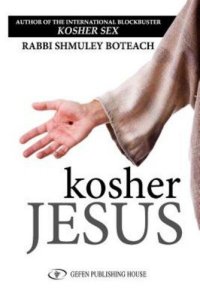 It’s important to acknowledge the obvious. I have called into question the veracity of much that is contained in the holy Gospels. I’ve cast doubt on some of the essential elements of the story of Jesus as they have been handed down by generations of Christians. Obviously, my Christian readers are going to feel somewhat confused or, worse still, offended – which is, of course, not my intention.

That’s an understatement. OK, to be fair, I’m hardly surprised or dismayed at Rabbi Boteach’s illustration of Jesus, Paul, the early church, and Christianity in general. And while I will be writing a full review of this book right after I finish it, I wanted to address this particular aspect of the Rabbi’s writing right now, since it’s been pretty much what I’ve been thinking about for the last 150 pages or so.

Paul’s claims about who Jesus was and what he preached are made more tenuous by the sheer scope of his deviations from the lessons of Jesus’ own followers. The leaders of the Jerusalem Church, Peter and James, insisted that Jesus’ message was for the Jews and was dedicated to preserving Jewish law and observance. Paul transformed that message completely.

Paul claimed to know better what Jesus intended than the disciples whom Jesus taught directly – even though Paul never even met Jesus. He said that Jesus meant to abolish Jewish law, that faith is more important than works, and that the sole criteria for salvation is faith in Christ. Not only that, Paul added that Jesus was not mortal, and his claim to be the messiah meant that he was the divine son of God. Finally, Paul, a self-declared Roman citizen, shifts the developing faith of Jesus, Christianity, to be pro-Roman and anti-Jewish. Paul attacks Judaism as antiquated and obsolete, and to cap it all off, he accuses the Jews of killing Jesus, also claiming they attacked him personally on many occasions.

Interestingly enough, most Christians reading the paragraph I just quoted, would probably nod their heads in agreement to all of those statements saying that indeed, Jesus really did all of those things…except Rabbi Boteach says they are all patently false. He says that while Jesus may have honestly believed he was the Messiah and desired to free his people from Roman tyranny, he could not have believed he was also God or intended for anyone to worship him, least of all Gentiles. While Boteach paints a picture of Peter as a coward and a hypocrite, the real “villain” of his piece is Paul, who may not even have been a born Jew, and who took the teachings of an innocent Rabbi and would-be revolutionary Messiah, and turned them into the basis for a Gentile religion that was bent on placating idolatrous Rome while “demonizing” Judaism and the Jewish people.

In order to make his points regarding the Jewish identity of Jesus credible, Rabbi Boteach has to deconstruct every single major tenet of the Christian church. Jesus was a man and not God incarnate. He thought he was the Messiah (which is not a crime in Judaism) but obviously he wasn’t since he died rather than successfully establishing Israel’s self-rule. He was not born of a virgin, he did not speak against the Law, he lead a lifestyle that was completely Jewish and totally consistent with the Law of the Jews, and he didn’t want to have anything to do with the non-Jewish peoples. He hated Rome and he loved his people and wanted to free them from their cruel oppressors. Period.

While I agree there is much to learn by rediscovering the Jewish Jesus, I’m not sure what Rabbi Boteach wants his Christian readers to do about it. If a Christian were to read all of this and take every word at face value, questioning nothing, he’d have to conclude that his Christian faith is a sham. He’d have to conclude that everything he had been taught by the church about Jesus and faith and salvation was at best, an elaborate fantasy, and at worst, the most heinous of lies.

I really don’t think most Christians will be taking this part of the book to such extremes. Yes, they may be confused. Yes, they may certainly feel offended. But since Rabbi Boteach says it is not his intent to confuse or offend his Christian readers, how does he expect them to reconcile their faith with his book short of tossing it into the trash can?

In reading this book, I ask my Christian readers not to discard but to expand their existing ideas about who Jesus really was. But what is the impact in doing so? Does this mean we can’t trust the New Testament? Does this mean we’re tinkering with a divine document? Again the answer is no. The writers of the New Testament indeed may have drawn from divine inspiration.

If Rabbi Boteach really believes that it’s possible the content of the New Testament was divinely inspired, I can understand why a good many Orthodox Jewish Rabbis are upset with him right now. Also, if he really believes that statement, how can he use the New Testament content to acknowledge his viewpoint of Jesus the Rabbi and political dissident while denying Jesus the Messiah, Prophet, and Savior from God? He can’t have it both ways, or can he?

I believe the Lucan editors made their changes for the reasons enumerated and to hide the subversive details of the revolutionary nature of Jesus. But the changes they made were not total. They didn’t erase the entire original meanings; messages may actually have been intentionally encoded into the Gospels…

Beyond the simplest reading of the New Testament, just as in the Hebrew Bible, there remain layers and layers hidden from view.

It sounds like, in order to encourage his Christian readers to not “discard but to expand their existing ideas about who Jesus really was,” Rabbi Boteach is encouraging them (us) to still consider the New Testament text as divinely inspired and containing hidden messages, just as the Tanakh (Old Testament; Hebrew Bible) does, from a Jewish point of view.

In making this statement (and I have to be really careful here), Rabbi Boteach does not sound unlike some of those Jews who really do believe Jesus was the Messiah King and who accept that the New Testament has as much validity as a holy book of the Jews as does the Tanakh.

No, I don’t think Rabbi Boteach is some sort of “crypto-Messianic Jew,” but some of what he writes intersects with what the ethnically, culturally, and religiously Jewish people who have faith in Jesus as Messiah and Savior believe.

Rabbi Boteach walks a very fine line here. He must communicate that he, as a Jew, does not believe for a split second that Jesus was of divine origin or any of the supernatural claims about him that are typically made in Christianity, but at the same time, he must convince his Christian readers that he does not think they are a bunch of fools or lunatics for believing everything the church believes about Christ.

I don’t think that’s possible or at least, I don’t think that Rabbi Boteach actually pulled it off. Either Jesus is the Christ as the church says he is, divine in origin, having a place of extremely high merit in the Heavenly court, and is much more than just one of the myriad tzadikim in Jewish history…or he was a great Rabbi, a passionate leader of his people, a revolutionary who desired to free Israel from Rome…and he was a man who died fighting for a worthy cause. It may be possible to overlap those roles and to distill out of them, a portrait of the Jewish Jesus who was Messiah, Prophet, miracle worker; who died and was resurrected but never ever abandoned his people or taught against the Law, but you can’t delete so much of the Christian faith from the Jewish Jesus and have him remain the resurrected King who will return on the clouds to free not only Israel, but the world.

Either Christians, mistaken though they may be in not recognizing the true Jewishness of Jesus, can have faith in their Savior or they can’t. Rabbi Boteach may intrigue his Christian readers, and he may get some of them to consider a somewhat more Jewish perspective on the heretofore Gentile Jesus, but he will never sell the Christians that Jesus had no power to save their souls, and never even wanted to. Any Christian who would choose to completely embrace Rabbi Boteach’s reconstruction of Jesus would be a person completely broken in their faith; crushed under the burden of a salvation lost and a King who never cared about all the Gentiles in need of a Savior.