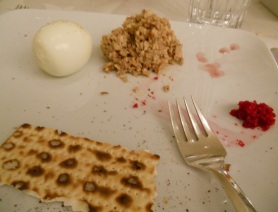 All in all, this year’s Passover seder in my home was pretty lousy. There are a lot of reasons for this, most of which I am not at liberty to discuss. It’s wasn’t anyone’s fault. No one burned the roast, or behaved poorly, or arrived abysmally late to the event. But it certainly wasn’t the joyous occasion of freedom that I usually anticipate…at least not on the surface.

But I was disappointed and sundown at the end of Shabbat and the first full day of Passover was a sad relief. At least it was over.

I had anticipated a simple but happy affair. It is true that we were all busy for the past couple of weeks and there was no elaborate preparation for Passover, as there has been in years past. My wife and daughter (the principle authors of our family seder) were incredibly busy in the weeks approaching the first day of Pesach, so there wasn’t an opportunity to plan an elaborate meal. I had once suggested to my daughter that my sons and I do the actual planning and cooking this year, but her disdain for our “male” abilities in this area became immediately apparent. I actually thought at one point that we wouldn’t have a seder at all.

As the head of household, the responsibility to lead our family seder falls to me. This is when I become acutely aware that I’m a goy and while reading the Leader’s portions of the Haggadah, I tend to become more than a little embarrassed. This year, I was also the only Gentile present in a family of Jews, so my chagrin was even greater than usual. I also hadn’t had time to even look at the Haggadah prior to the start of the seder, so I could feel myself stumbling over the words and wondering if it was such a good idea to even hold the seder.

But it was my idea.

My wife, son, and I actually talked about not having the seder earlier in the day. True, all the food had been prepared, but perhaps, given the circumstances, we should just have a “Passover-themed” meal and call it good. But then, I had to shoot off my big mouth (and remember, I’m the only goy in this conversation) and say that Passover has been observed by Jews in all sorts of difficult circumstances but it has been observed. It’s important (in my humble Gentile opinion) to not give up the celebrations and commemorations of Judaism when faced with adversity. If a little difficulty was all it took to stop a Jew from celebrating what is Jewish, then probably there would be few or even no Jews left by now, or at least, no Jews who remember how to have a Passover seder.

So we went ahead and had our seder.

I won’t describe the grizzly details, but it wasn’t joyous. It wasn’t hideous or outrageously bad, but it simply fell rather flat. It lacked “pizzazz.” Whatever makes a seder an experience rather than just a meal with some reading just wasn’t there.

It was sort of like praying to God in a time of need and then feeling worse after praying then you did before entering His presence.

And it’s over for another year. Next year in Jerusalem? I’d be satisfied if it’s next year in my dining room, as long as at the end of the seder, we all felt, as a family, as if the Passover had been observed and not mangled or abused.

So for the next week or so, I’ll be dining on dry matzah and ashes and trying to remember that holiday expectations are not the same as a relationship with God. Events can be messed up for many, many reasons but it’s what God experiences with us that matters. Since I’m not Jewish, I am not strictly commanded to observe the Passover, but my family is. If I’ve done anything to prevent them from observing the mitzvot associated with the Pesach meal, then I’ll bear my guilt and whatever consequences that go along with it alone.

It’s not particularly my fault. It’s no one’s fault. But this being the first year I’m not affiliated with any congregation or religious organization, I somehow feel that I’m to blame. I’m looking for the good among the bad; the flower among the weeds, but so far, it hasn’t bloomed.

It is hard to describe the dire poverty that afflicted the citizens of Yerushalayim eighty years ago. The scarcity of food was so extreme that children sometimes went to sleep without having tasted a morsel the entire day.

One child was was walking along on a Shabbos afternoon when he noticed a very valuable gold coin. Of course he could not pick it up, since it was muktzeh. But he figured that he could stand on it, to guard it and take it after Shabbos. Unfortunately, an Arab youth passed by and he noticed that the boy remained stationary. Understanding that it was the Jewish Shabbos and that the boy might be guarding something to take after Shabbos, he threw the child to the floor and spotted the valuable coin— which he immediately pocketed.

The child was overwhelmed with grief. Not only had he endured being thrown violently to the ground, he had also lost a coin which could have fed his family for quite some time. He went into the Rachmastrivka shul and began to cry bitter tears.

When Rav Menachem Nochum, zt”l, the Rachmastrivka Rebbe, heard a child crying copiously in the beis haknesses, he immediately went to see what had occurred. When he asked the child and was told the entire story, he comforted the child. “Today is Shabbos, so we can’t speak about money, but please calm down for now. Come to see me after Shabbos.”

After Shabbos the rebbe took out a coin—exactly like what had been taken from him— and showed it to the child. “I am happy to give you this coin if you will sell me the merit of having endured great pain for the honor of Shabbos. To keep the halachah you were thrown onto the floor and you lost a fortune of money.” But the boy immediately refused. “No. I will not relinquish the reward for this mitzvah for any money in the world!”

Later the boy recounted. “I left the rebbe’s presence with a conviction that the treasure I had gained through my suffering was much more valuable than any mere coin!”

“Blessed are the poor in spirit, for theirs is the kingdom of heaven. –Matthew 5:3 (ESV)

The “poor in spirit” is looking for the golden treasure among broken crumbs of matzah. When a celebration of God dedicated to joy and freedom is anything but joyous and free, what then?

NOTE: I didn’t post my usual “meditation” Sunday morning because, outside of Israel, both the first and second day of Passover are considered “Sabbaths.” For that reason, I refrained from making any comments on the Internet during these special Shabbatot. Thank you to those who contacted me behind the scenes asking if everything is OK. I appreciate it.

4 thoughts on “The Uninspired Passover Seder”