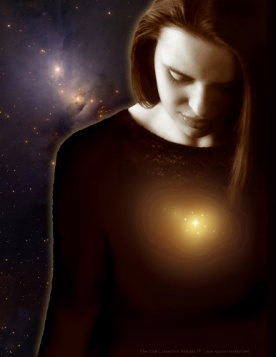 When a ray of light strikes a crystal, it gives a new quality to the crystal. And when God’s infinitely disinterested love plays upon a human soul, the same kind of thing takes place. And that is the life called sanctifying grace.

The soul of man, left to its own natural level, is a potentially lucid crystal left in darkness. It is perfect in its own nature, but it lacks something that it can only receive from outside and above itself. But when the light shines in it, it becomes in a manner transformed into light and seems to lose its nature in the splendor of a higher nature, the nature of the light that is in it.

So the natural goodness of man, his capacity for love which must always be in some sense selfish if it remains in the natural order, becomes transfigured and transformed when the Love of God shines in it. What happens when a man loses himself completely in the Divine Life within him? This perfection is only for those who are called the saints – for those rather who are the saints and who live in the light of God alone. For the ones who are called saints by human opinion on earth may very well be devils, and their light may very well be darkness. For as far as the light of God is concerned, we are owls. It blinds us and as soon as it strikes us we are in darkness. People who look like saints to us are very often not so, and those who do not look like saints very often are.

This explains a lot. It explains how people who have no faith in God in any manner and no apparent external moral compass (at least from a religious person’s point of view) can still do good and great things for others and uphold noble causes. It also explains how some “religious people,” even though they seem to have faith in God and to uphold the teachings of His prophets and apostles, can harbor evil thoughts and feelings for others and say and do heinous things, all supposedly in the name of God.

Merton further illustrates that a person who is perfect in his or her nature because he or she was made in God’s image and who allows themselves to accept and reflect and refract the light of God as does a crystal, can be perfected beyond human standards and be elevated in a relationship with God and man. This is what it is to be holy.

I was struck with these passages in Merton’s book and remembering this was written when he was a young Trappist monk, I was astonished at how closely some of his ideas and images paralleled those of the Rebbe, Rabbi M. M. Schneerson, as I often quote them from the interpretation of Rabbi Tzvi Freeman. These quotes, of course, are an extension of Chasidic and even Kabbalistic thought and belief, which seems an even stranger comparison for me to make to the observations and reflections of a Catholic monk writing his autobiography in the 1940s.

I wonder if men from such different cultural and religious backgrounds aren’t on some level joined together by the light of God?

But if this unlikely and wonderful parallel between two men of such divergent faiths exists, how much more tragic that there are so many others in the religious and spiritual arena (and particularly in the blogosphere) who claim the title “saint” or “prophet” but who Merton would definitely classify as “devil?”

When it comes to accepting God’s own authority about things that cannot possibly be known in any other way except as revealed by His authority, people consider it insanity to incline their ears and listen. Things that cannot be known in any other way, they will not accept from this source. And yet they will meekly and passively accept the most appalling of lies from newspapers when they scarcely need to crane their necks to see the truth in front of them, over the top of the sheet they are holding in their hands.

For example, the very thought of an imprimatur on the front of a book – the approbation of a bishop, allowing the book to be printed on the grounds that it contains safe doctrine – is something that drives some people almost out of their minds with indignation.

I’m not a big fan of censorship and I’m probably one of those people who would be driven out of my mind with indignation if someone should hand me a book that was declared “safe” by the Catholic church. But in reading these sentences and the ones that followed, I began to draw a comparison to what Merton could not possibly have anticipated – the proliferation of information on the world wide web.

If you are reasonably well educated from other sources, (such as books and reliable teachers) you can probably make your way through the maze of good content and bad, but there are so many would-be “saints” in the world who unknowingly fall into the teachings of a “devil” out of sheer ignorance.

I was once teaching a class at a congregation and was confronted with a strange thought by one of the students. In the course of the conversation, she said the oddest thing. I believe we were talking about the Tetragrammaton; the most holy and unpronounceable name of God, which many people express as “YHWH,” and she said that the reason the Jewish people were exiled was that they refused to reveal the pronunciation of “the Name” to the world and thus, lost all knowledge of the pronunciation as an additional punishment.

Yes, that sounds crazy to me, too.

I don’t remember all of the details and I probably wouldn’t publish them if I did, but apparently, there was some sort of “teacher” on the Internet who was spreading this kind of information. She gave me the URL to his site and I looked him up.

There were years and years and years worth of articles on his site (I really don’t remember his name) and it would have been impossible to go through all of his stuff. I searched for the information on the “Sacred Name” but didn’t find it. I looked through some random web articles and some of it was relatively sane and a lot of it wasn’t. The guy seemed like he was intelligent and even educated, but his conclusions were highly suspect.

With that memory fully recalled and in reading Merton’s book, I’m beginning to develop a new respect for the “imprimatur” concept. Not in terms of consuming data that is only acceptable to the Catholic church, but with the idea of separating the “wheat from the chafe” relative to sound versus unsound religious “research”. If I want to buy a book, I can always go to Amazon and read the reviews to get some sort of idea if the book is any good or not (although sometimes even that litmus test fails). For random craziness on the web, there often is not litmus test except keeping yourself educated with valid sources and knowing when something looks suspicious.

Even with that, some otherwise reliable and well-educated blog authors can become overly-enamored with their own self-importance, just because they get a lot of attention and some local notoriety. The curse of even marginally “famous” believers is that the temptation to forget that God is the focus can be really strong.

I occasionally get “spammed” by folks who tell me that they’ve got a direct line to the Holy Spirit of God who whispers in their ears and helps them not rely on their own intellectual prowess. That kind of makes it hard for me to say that God should be our final litmus test on information when any sort of supernatural revelation is, by its very nature, totally subjective. We can say that revelations of the Spirit should only be considered on the up and up if they jive with Scripture, but interpretation of Scripture is also extremely variable, depending on who you read, who you talk to, and who you believe. Seems like a vicious circle.

Ultimately, we each take some sort of stand and say that “this religion” or “this denomination” or “this sect” or “this viewpoint” is what we consider foundational, and we proceed from that point. None of us have it completely “right” but then perhaps none of us have it completely “wrong” either. In the intellectual “holy wars” on the web, regardless of our differing opinions, we can still rely on the words of the Master that are not ambiguous:

And one of the scribes came up and heard them disputing with one another, and seeing that he answered them well, asked him, “Which commandment is the most important of all?” Jesus answered, “The most important is, ‘Hear, O Israel: The Lord our God, the Lord is one. And you shall love the Lord your God with all your heart and with all your soul and with all your mind and with all your strength.’ The second is this: ‘You shall love your neighbor as yourself.’ There is no other commandment greater than these.” And the scribe said to him, “You are right, Teacher. You have truly said that he is one, and there is no other besides him. And to love him with all the heart and with all the understanding and with all the strength, and to love one’s neighbor as oneself, is much more than all whole burnt offerings and sacrifices.” And when Jesus saw that he answered wisely, he said to him, “You are not far from the kingdom of God.” And after that no one dared to ask him any more questions. –Mark 12:28-34 (ESV)

I am also reminded of the Prophet Micah: 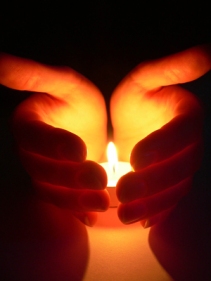 And although not a prophet as we understand the term, Thomas Merton managed to crystallize something important:

So the natural goodness of man, his capacity for love which must always be in some sense selfish if it remains in the natural order, becomes transfigured and transformed when the Love of God shines in it.

If we open ourselves to Him, we are the breath of God. When we love others, then we are breathing, then we are alive.

Develop your awe of heaven and you will diminish your fear of human beings.

-Rabbi Tzvi Freeman
from the Rebbe, Rabbi M. M. Schneerson
to a Jewish activist in a dangerous Arab land
Chabad.org

8 thoughts on “Light and the Lucid Crystal”