There is an interesting, but somewhat misunderstood, halachah. It has to do with not filling one’s mouth with laughter now while we do not have a Beis HaMikdash. In the words of the Orchos Tzaddikim: “One should only feel joyous in that which brings to enhanced service of God. He should never feel joy from that which causes another pain. For example, one who has wheat should not feel happy if there is a famine and he will make a large profit, since this is bad for others. One should also never take joy in another person’s death, even if he was left a legacy and will profit handsomely from this. Regarding such situations, one who shows proper decency and does not feel joy fulfills the mitzvah of ואהבת ’לרעך כמוך. One should accustom his heart to feel joy at his friend’s success. Most especially one should feel great happiness when he see others doing God’s mitzvos, since this is God’s will.

“Nevertheless, one should not fill his mouth with laughter in this world, as we find in Berachos 31. Since the Beis HaMikdash was destroyed, all joy has been mixed with sorrow. We also find in Niddah 23 that Rabbi Yirmiyahu tried to make Rabbi Zeira laugh but did not succeed.

When someone learned that the halachah not to fill one’s mouth with simcha is actually in the Shulchan Aruch, he was shocked and wondered how this could be prohibited.

He decided to ask the Sdei Chemed, zt”l, who was certainly a true scholar and fulfilled in every detail of halachah without compromise. “The halachah not to fill one’s mouth with laughter due to the destruction of the Beis HaMikdash is a middas chassidus. But this should not be confused with mockery. One who mocks is in one of the four groups that will not receive the Shechinah, as we find in Sotah 42!”

That’s kind of a shame because we may have to try to relate to it at some point, especially if traditional Jewish thought is correct and the Messiah, that is Jesus Christ, actually rebuilds the Temple.

However even if you have a tough time with that perspective, our story off the Daf can tell us a few other things, such as not rejoicing under circumstances when we win but someone else loses. We have a tendency to do that as human beings, but when we lose, when we’re hurt, when we’re afraid, we certainly don’t want others to feel happy about it. Most of the time, when we’re under duress, we don’t want people around us to feel happy about anything. We want them to feel upset, compassionate, and then try to help us. 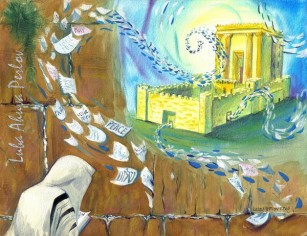 What if a Christian sees a Jew under duress over the destruction of the Temple? I know it happened almost 2,000 years ago and Christians tend to think the Jews should “get over it” but that’s because we don’t understand the significance of the Temple in Judaism. We want Jews to realize that Jesus Christ is their temple and that it’s going to be all right because Jesus loves them. But most Jews aren’t going to relate to oto ha’ish that way, at least not right now (and I consider it a miracle any time a Jewish person does recognize the Jewish Messiah through the Gentile disguise that we have put on Christ).

I found the following footnotes for Chapter 11 of the Rambam’s The Laws and Basic Principles of the Torah at history.hanover.edu:

The whole of the following passage was deleted from most of the editions published since the Venice edition of 1574.

“If he did not succeed to this degree or he was killed, he surely is not [the redeemer] promised by the Torah. [Rather,] he should be considered as all the other proper and legitimate kings of the Davidic dynasty who died. G-d only caused him to arise in order to test the multitude. As it is written [Daniel 11:35], “Some of the wise men will stumble, to purge, to refine, and to clarify, until the appointed time, for it is yet to come.”

“Jesus of Nazareth who aspired to be the Mashiach and was executed by the court was also spoken of in Daniel’s prophecies [Daniel 11:14], “The renegades among your people shall exalt themselves in an attempt to fulfill the vision, but they shall stumble.”

The rest of the text is equally uncomplimentary toward Christianity, but that’s less to do with Jesus as Messiah and more to do with the subsequent “development” of the Christian/Jewish relationship over the past 20 centuries or so. However the beginning of Chapter 11 also says the following:

In future time, the King Mashiach[1] will arise and renew the Davidic dynasty, restoring it to its initial sovereignty. He will rebuild the [Beis Ha]Mikdash and gather in the dispersed remnant of Israel. Then, in his days, all the statutes will be reinstituted as in former times. We will offer sacrifices and observe the Sabbatical and Jubilee years according to all their particulars set forth in the Torah.

Whoever does not believe in him, or does not await his coming, denies not only [the statements of] the other prophets, but also [those of] the Torah and of Moshe, our teacher, for the Torah attests to his coming, stating: [Devarim 30:3-5]

This is similar to something the Master said 1,200 years earlier:

Do not think that I will accuse you to the Father. There is one who accuses you: Moses, on whom you have set your hope. For if you believed Moses, you would believe me; for he wrote of me. But if you do not believe his writings, how will you believe my words?” –John 5:45-47 (ESV)

Perhaps we Christians shouldn’t rejoice too much, not because we’re mourning the Temple and lament its loss, but because our human lives and failures made it necessary for Christ to suffer and die. True, he was resurrected again, just as the Temple will be remade by him (my opinion), but that doesn’t absolve us of our crimes, nor does it repair our present broken and suffering world. To those Christians who rejoice over Jewish suffering, you are missing the point, not only of the lesson of the Sages but of God’s own teachings. If the Jewish people mourn the Temple, they will also mourn Messiah.

“And I will pour out on the house of David and the inhabitants of Jerusalem a spirit of grace and pleas for mercy, so that, when they look on me, on him whom they have pierced, they shall mourn for him, as one mourns for an only child, and weep bitterly over him, as one weeps over a firstborn. –Zechariah 12:10 (ESV)

While the prophet is most likely speaking directly to Israel, Christ was pierced for us as well, so we should also mourn and not overly rejoice at our Salvation. True, we thank God for our redemption from death and our adoption as sons and daughters of the Most High, but there is still a lot of work to be done and if we are only happy for ourselves, how can we strive to reach out toward others in their suffering?

For I could wish that I myself were accursed and cut off from Christ for the sake of my brothers, my kinsmen according to the flesh. They are Israelites, and to them belong the adoption, the glory, the covenants, the giving of the law, the worship, and the promises. To them belong the patriarchs, and from their race, according to the flesh, is the Christ, who is God over all, blessed forever. Amen. –Romans 9:3-5 (ESV)

As Maimonides said, “Whoever does not believe in him, (the Messiah) or does not await his coming, denies not only [the statements of] the other prophets, but also [those of] the Torah and of Moshe, our teacher, for the Torah attests to his coming.”

Israel awaits his coming but they do not know who he is. We who do know his name must not rejoice that we hold that knowledge and others do not. We must not be bitter that others refuse to accept his name as Messiah. We must live our lives with caring and compassion for everyone, shunning no man whether Jew or Gentile, but welcoming everyone in peace to our Temple and our Great Mountain of God.

But there is another way of understanding it. With the help of verses such as “I will lift up my eyes to the hills – From whence comes my help?” (Psalm 121:1), where the psalmist lifts up his eyes to the “mountains” (as the Hebrew has it), the following explanation is given: “You shall become a plain – this is Messiah Son of David. And why is his name called Great Mountain? Because he is greater than the fathers, as it says, ‘Behold, My Servant shall deal prudently; He shall be exalted and extolled and be very high’ (Isaiah 52:13). He shall be higher than Abraham, more exalted than Jacob and higher than Jacob. … more exalted than Moses … and higher than the angels. This is why it says, ‘Who are you, O great mountain?'” (Midrash Tanchuma W, Toledot 14).

2 thoughts on “Mourning for the Great Mountain”