I was watching in the night visions and behold! with the clouds of heaven one like a man came; he came up to the One of Ancient Days, and they brought him before Him. He was given dominion, honor and kingship, so that all peoples, nations and languages would serve him; his dominion would be an everlasting dominion that would never pass, and his kingship would never be destroyed.

And immediately after the distress of those days,
the sun will turn dark,
and the moon will not shine its light;
the stars will fall from heaven,
and the armies of heaven will be shaken.
Then the sign of the son of man will appear in heaven,
and all families of the earth will mourn,
and they will see the son of man coming
with the clouds of heaven in power and great glory.

The theology of the Gospels, far from being a radical innovation within Israelite religious tradition, is a highly conservative return to the very most ancient moments within that tradition, moments that had been largely suppressed in the meantime – but not entirely. The identification of the rider on the clouds, with the one like a son of man in Daniel provides that name and image of the Son of Man in the Gospels as well. It follows that the ideas about God that we identify as Christian are not innovations but may be deeply connected with some of the most ancient Israelite ideas about God. These ideas at the very least, go back to an entirely plausible (and attested) reading of Daniel 7 and thus to the second century B.C. at the latest. They may even be a whole lot older than that.

-Daniel Boyarin
From Chapter 1: From Son of God to Son of Man
in his book The Jewish Gospels

I previously mentioned when discussing Boyarin’s book, that “I would love to see Boyarin’s research from exclusively Jewish sources that supports his understanding of these different factions of Jews, some of whom held beliefs that so mirrored a Christian’s vision…” In Chapter 1, he provides a compelling connection between the visions of Daniel as the basis how some first century Jews could indeed anticipate God as the “One of Ancient Days” who gave one like the son of man” power and dominion over all the peoples and nations of the earth. I’ve always been concerned about the apparent “disconnect” between the Old Testament and Jewish vision of the Messiah and the New Testament and Christian Jesus. Now I have hope that such a disconnect does not, in fact, exist.

Without providing too many direct quotes from the chapter, Boyarin says it would have been necessary to link the “son of man” vision to the Messiah, since it was not necessarily presupposed that one would be the other. He also effectively describes how “Son of Man” could directly refer to the divine-like being standing before the throne of the Ancient One, while “Son of God” referred to this being’s humanity. Indeed, we’ve already seen in Daniel 7:13-14 how the phrase “son of man” directly applies to the divine-like being in human form who stood before the throne of the Ancient One and was given eternal authority over the earth.

The kings of the earth take their stand and the princes conspire secretly, against Hashem and against His anointed… “I Myself have anointed My King, over Zion, My holy mountain!” I am obliged to proclaim that Hashem said to me, “You are My son, I have begotten you this day.” –Psalm 2:2,6-7 (Stone Edition Tanakh)

The “anointed one” is understood as the Messiah, the Christ. Boyarin explains this passage thus:

The anointed, earthly king of Israel is adopted by God as his son; the son of God is thus the reigning, living king of Israel. “This day I have begotten you” means this day you have been enthroned. Militating against any literal sense in which the king was taken as son of God and divine is the “this day” which, it seems, may only mean on this the day of your accession to the throne.

This is the traditional, modern Jewish understanding of the Messiah, a completely human being who will rise up from the ranks of his people to become King of Israel and by divine appointment (if not by divine nature), King over all the nations of the earth.

But if you put these pieces together, if you join the “Son of God” with the “Son of Man,” you come up with an entirely new being relative to how Jews today understand Messiah; you create an image that is not unlike how Christians see the Christ, the Messiah…Jesus.

You also, according to Boyarin’s argument, come up with an explanation as to how late second Temple Jewish men like Peter, Philip, and Matthew could believe that Jesus was not only the Messiah but indeed, a divine being who is “exalted at the right hand of God.” (Acts 2:33 ESV) In fact, reading the first chapter of Boyarin’s book is so riveting, I found myself asking why the Jewish author of this book isn’t convinced of what he’s actually saying here.

Taking the two-throne vision out of context of Daniel 7 as a whole, we find several crucial elements…

What Boyarin seems to be saying is that, while he does not necessarily believe Jesus is the Messiah or the mysterious “son of man” figure we see in Daniel’s vision (and I’m reading between the lines here), he can fully understand why some Jews in the time of Jesus would totally embrace this belief. He is saying that the conception of the Messiah as divine or divine-like was a completely acceptable understanding to some Jews (but not others, since claims of Christ’s divinity resulted in other Jews trying to stone him).

If all the Jews – or even a substantial number – expected that the Messiah would be divine as well as human, then the belief in Jesus as God is not the point of departure on which some new religion came into being but simply another variant (and not a deviant one) of Judaism. As controversial a statement as this may seem, it must be first be understood in the context of a broader debate about the origins of the divinity of Jesus. The theological idea that Jesus actually was God, however refined by later niceties of trinitarian theology, is referred to as “high Christology,” in opposition to “low Christologies” according to which Jesus was essentially an inspired human being, a prophet or teacher, and not God. 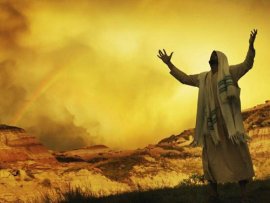 My basic understanding of what Boyarin is saying in this chapter is that while the viewpoint of the nature and identity of Jesus as high Christology is perfectly reasonable within an ancient Jewish context as connected to Daniel 7, it was only one Jewish perspective that existed at the time about Jesus and may well have been, as far as Boyarin is concerned, quite wrong.

However, Boyarin doesn’t go out of his way to express his personal beliefs in this chapter and his beliefs are not the point. The point is whether or not it is reasonable to believe that many, many first century Jews (as many as “tens of thousands” according to Bible Scholar David Bivin) could have seen Jesus as both Messiah King and divine being within the normative Judaism of their day.

I would argue that this divine figure to whom authority has been delegated is a Redeemer king, as the Daniel passage clearly states. Thus he stands ripe for identification with the Davidic Messiah, as he is in the Gospel and also in non-Christian contemporary Jewish literature such as Enoch and Fourth Ezra. The usage of “Son of Man” in the Gospels joins up with the evidence of such usage from these other ancient Jewish texts to lead us to consider this term used in this way (and, more important, the concept of a second divinity implied by it) as the common coin – which I emphasize does not mean universal or uncontested – of Judaism already before Jesus.

Although it is extremely likely that Boyarin isn’t convinced of the Messianic or divine identity of Jesus, the fact that it was an accepted way for first century normative Judaism to view the Christ brings up the obvious question. What if the “Messianic Jews” of the first century were right? What if Jesus was and is the Messiah King and Daniel’s “Son of Man?”

It would mean that not only are the core Christian beliefs about Jesus correct but that they are wholly and completely Jewish in nature and origin, not fabrications of later Gentile Christianity in early church history.

It also could mean, startlingly enough, that there’s a totally and completely Jewish way to understand Jesus that exists apart from the “whitewashed,” “Gentilized,” version we are used to seeing in church, on television, in the movies, in paintings, and in many popular New Testament translations.

One of the reasons I deliberately quoted from the Stone Edition Tanakh and Vine of David’s Delitzsch Hebrew Gospels is to try to peek behind the curtain, so to speak, at this Jewish perception of the Jewish Messiah King.

I know I’ve written about this before, but I think it’s important for both Christians and Jews to have a better understanding of Jesus and his once and future role as Savior and King and to try to grasp the realization that not only is Jesus completely Jewish, both as he once lived among men and as he will return in glory, but that accepting him as such, is not an “unJewish” thing to do.

According to Boyarin, such an acceptance of Jesus as Messiah King was in fact, a completely Jewish thing to do in the first century.

What if it’s equally acceptable for a Jew to accept Jesus as Messiah in the 21st century?