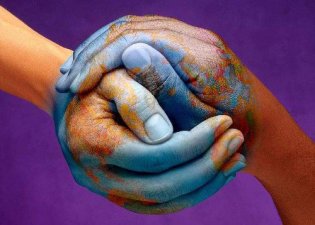 How can we heal the world?

When a Jew, wherever she or he goes, carries every other Jew in his or her heart, then all of us are one.

And when we are one, all the peoples of the world can live in harmony as one.

And then the world is healed. For we are the heart of the world.

-Rabbi Tzvi Freeman
“We Can Heal the World”
Based on letters and talks of the Rebbe
Rabbi M. M. Schneerson
Chabad.org

But what is Jesus saying in his new commandment? Is he telling his disciples (who at that point were all Jewish disciples) to love everybody? No. He’s telling them to love each other. In fact, he says that by every Jewish disciple of the Master loving each other, everyone else will know they are Christ’s disciples. It is a defining characteristic of being a disciple of the Jewish Messiah King both then, and in the present day world.

Doesn’t that fly in the face of this parable?

But he, desiring to justify himself, said to Jesus, “And who is my neighbor?” Jesus replied, “A man was going down from Jerusalem to Jericho, and he fell among robbers, who stripped him and beat him and departed, leaving him half dead. Now by chance a priest was going down that road, and when he saw him he passed by on the other side. So likewise a Levite, when he came to the place and saw him, passed by on the other side. But a Samaritan, as he journeyed, came to where he was, and when he saw him, he had compassion. He went to him and bound up his wounds, pouring on oil and wine. Then he set him on his own animal and brought him to an inn and took care of him. And the next day he took out two denarii and gave them to the innkeeper, saying, ‘Take care of him, and whatever more you spend, I will repay you when I come back.’ Which of these three, do you think, proved to be a neighbor to the man who fell among the robbers?” He said, “The one who showed him mercy.” And Jesus said to him, “You go, and do likewise.” –Luke 10:25-37 (ESV)

Jesus not only defined the two greatest commandments, which are the container for all of the mitzvot, but he “operationalized” them by giving us an illustration. It’s fairly well-known that Jews and Samaritans didn’t get along very well. They still don’t (yes, Samaritans still exist). Nevertheless, this Samaritan went out of his way to help the injured Jew proving, if we take Christ’s parable seriously, that he not only loved God with all of his resources, but that he did love his neighbor as himself.

“You have heard that it was said, ‘You shall love your neighbor and hate your enemy.’ But I say to you, Love your enemies and pray for those who persecute you, so that you may be sons of your Father who is in heaven. For he makes his sun rise on the evil and on the good, and sends rain on the just and on the unjust. For if you love those who love you, what reward do you have? Do not even the tax collectors do the same? And if you greet only your brothers, what more are you doing than others? Do not even the Gentiles do the same? You therefore must be perfect, as your heavenly Father is perfect. –Matthew 5:43-48 (ESV)

In this case, loving your enemy doesn’t mean giving the soldier of the opposing army a kiss on the cheek during battle. Your “enemy,” in this example, is also your neighbor, your fellow citizen, a member of your community. They’re just someone you don’t like and who doesn’t like you. Well, it’s a little more than that. Your “enemy” can be someone you may have regular contact with but, on some fundamental level, they aren’t part of your “group.” Kind of like Jews and Samaritans or Atheists and Christians. But there’s more.

The New Testament is replete with examples of this type of love and the secular, atheist world (and politically liberal religious people who have adopted those liberal social imperatives) is watching us very closely to see if we are showing that kind of love. More to the point, they are watching us to see when we don’t show that kind of love, so they can call us hypocrites and many other names.

But what is love?

Generally, it’s not the warm and fuzzy feeling you get in relation to small children, cute kittens, or the really attractive person you’ve just started dating (if you’re single and dating). Love is what you do. The Torah is also replete with examples of how to love people you may not necessarily like. Here’s a brief example.

The ancient Jewish mitzvot for how to love your Jewish neighbor became the cornerstone of the teachings of Jesus and not only affirmed these Torah commandments to his Jewish disciples, but established them as a way of life for all the non-Jewish disciples who came after them, hundreds and even thousands of years later.

But do we really love by doing? Do we go out of our way to help others?

Probably not as often as we should. The opportunities to fulfill the commandment to love are just endless. You probably come across such opportunities, great and small, everyday. Even holding the door open for someone fulfills this commandment. So does changing a person’s flat tire. So does smiling at someone who looks rather blue.

But while God may judge our love for others in this manner, most of the world doesn’t. Usually, Christian love is judged by how closely we approximate agreement with the various political and social priorities of the prevalent western, progressive society. Most recently, the most important social litmus test for whether or not a Christian truly loves is whether or not we wholeheartedly and unconditionally support “marriage equality” and all of the goals and priorities of the LGBT community.

I hate to bring politics into this, but this sort of thing has permeated the mainstream news media stories and it’s all over the numerous social networking venues. Reduced to its simplest form, for a progressive, a religious person is good if they completely agree with “marriage equality” and evil if they don’t.

But is that really love? Does being loving absolutely require total agreement with all popular social imperatives of the majority culture?

Probably not. I know I don’t. It doesn’t mean I don’t love them, it just means we have a difference of opinion or perspective on some matter. I love my three-year old grandson with all my heart, but I don’t always agree with him about what he wants to eat, how much television he wants to watch, and whether or not he should cross the street without holding my hand.

That’s not a great example for what I’m trying to say, but you get the idea. You can love someone a lot and still say, “No” to them or disagree with them, even on very important issues.

But what about the rest of the world? Do I love the stranger I walk past on the sidewalk in the way I love my wife? No, I don’t. So do I love the stranger at all? Yes, if they need my love. Unless I fail in the commandment, if they have a need that I can fulfill, I should fulfill it. Can I fulfill the needs of all strangers everywhere? No. I don’t have those kind of resources. So does that make me a failure at love as defined by God? I don’t think so. We should love as we have the ability to do so, not to the point of bankrupting ourselves or behaving irresponsibly.

If I say I love people including gay people, but I don’t wholeheartedly and absolutely support “marriage equality,” am I a failure at love?

I don’t think so, but opinions vary wildly on this point. Does loving someone mean agreeing with them on everything they say, want, feel, and do? If I don’t agree that gay marriage is the will of God because I cannot find it presupposed anywhere in the Bible, does that mean I don’t love a gay person or wouldn’t help him out with a meal, change his tire, open a door for him, smile at him, and otherwise express love toward him as God defines it?

I don’t think so.

But as you discovered at the beginning of this meditation, what love is and how it is expressed can be complicated. God is the source of our love. Before loving other people, we must love God, not just casually and not just abstractly, but with all of our mind, our emotions, our soul, and our resources. Only then are we equipped to love other people, starting with our own faith community but spreading out to the rest of humanity.

The “Good Samaritan” didn’t save all Jews who had been robbed and injured everywhere, he only saved the one he encountered. He may not have agreed with how the Jew defined religion, the various political and social causes he supported, or even the Jew’s attitudes about Samaritans (though those attitudes may have changed after this incident). All the Samaritan did, was take care of the injured man and made sure he was in a safe and secure place with his needs provided for. They didn’t have to be best friends and they didn’t have to share common social or personal opinions.

How can we love the world? We can start by carrying another person in our heart. We don’t have to always agree with each other. Loving other people doesn’t mean becoming a homogenous social mass without distinction. Ultimately, it will mean we all must love God, but obviously, that’s not going to happen anytime soon. However, for those of us who do love God, we can make a greater effort to love each other and to love others who are not like us. It doesn’t mean we have to surrender our moral imperatives as we understand them. It does mean that we must always be ready to change a tire, bind a wound, and take care of anyone who may need it and who we encounter.

Even if they don’t like us. Because in loving those people who say they’re our enemy, someday, we may heal them, and us, and everyone.

2 thoughts on “How Can We Love The World?”