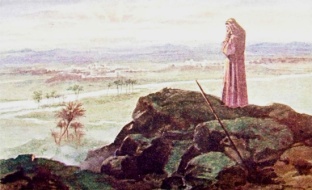 Now, O Israel, what does Hashem, your God, ask of you? Only to fear Hashem, your God, to go in all His ways and to love Him, and to serve Hashem, your God with all your heart and with all your soul, to observe the commandments of Hashem and His decrees, which I command you today, for your benefit. Behold! To Hashem, your God, are the heavens and higheset heavens, the earth and everything that is in it. Only your forefathers did Hashem cherish to love them, and He chose their offspring after them – you – from among all the peoples, as this day.

If you love me, you will keep my mitzvot.

For the Christian, it might seem strange to try to compare these two verses. Contextually, the passage from Deuteronomy is being addressed to the Children of Israel as they are preparing to cross the Jordan and take possession of the Land of Israel, as promised by God to the descendants of Abraham, Isaac, and Jacob. When Moses says to “observe the commandments of Hashem and His decrees, which I command you today,” we generally understand that he (and God) mean the Israelites are to observe and obey all of the Torah commandments given to them at Sinai. The majority of those commandments are not typically observed by the modern church, at least as we understand them in traditional Christian doctrine. But we do grasp the need to, as a holy people, obey our God.

Then we have the commandment of Christ to “keep my mitzvot.” What does that mean?

The NIV translation of this verse states, “If you love me, you will obey what I command,” while the ESV translation renders it similarly as “If you love me, you will keep my commandments.” Mitzvot (singular: “mitzvah”) is a series or collection of commandments typically associated with the Torah, but in a more expansive sense, “mitzvot” carries the meaning of a group of charitable acts performed for the benefit of others. For a modern observant Jew, even studying the Torah commandments fulfills a mitzvah, and the Jewish concept of mitzvot is far more involved than simply obeying a list of “dos” and “don’ts,” extending into an extremely rich and robust way of life referred to as halachah.

Jesus was and is a Jew and as translated by the DHE Gospels, the word he used that we normally read in English as “commandments” is rendered “mitzvot” in order to capture the truer meaning of his likely intent. Jesus was a Jewish teacher talking to his Jewish disciples and within the historical, national, and linguistic context, his audience would have had a perfect understanding of his meaning.

But do we? What were Christ’s mitzvot that he expected his disciples to obey as a sign of their love for him?

Before trying to answer that question, let me point out something. As Moses is speaking to the Israelites in Deuteronomy 10, he knows his time is short. This is the last time he will be able to speak to the people of Israel. Shortly after he finishes, he will pass his authority to Joshua, who will lead the Israelites across the Jordan, and then Moses will die, his mission completed, at least as deemed necessary by God if not Moses himself.

Jesus, in John 13 and beyond, is also speaking to his disciples as he is preparing to die. Gethsemane, Golgotha, and the cross were only hours away.

Moses and Jesus, both men on the cusp, both desperately in love with their people, knowing they will be leaving them soon, knowing that their last words are vital, knowing that everything is at stake, and everything will be lost should their followers not heed those words.

Moses and Jesus, both men who have commanded their followers to obey the mitzvot. We have a substantially established idea of the nature of the mitzvot that Moses expected the Israelites to obey. But what are the mitzvot of Jesus Christ?

I am giving you a new mitzvah: that you love one another. With this all will know that you are my disciples: if love dwells among you. –John 13:34-35 (DHE Gospels)

This is my mitzvah: that you love one another as I have loved you. There is no love greater than the love of one who gives his life on behalf of his companions. As for you, if you do what I command you, you are my companions because I have made known to you all that I have heard from my Father. You did not choose me; rather, it is I who chose you. I have charged you to go and produce fruit, and your fruit will endure. All that you ask from my Father in my name he will give you. I command you these things so that you will love one another. –John 15:12-17 (DHE Gospels)

However else you choose to consider the commandments of Jesus and of God as they apply to your life as a Christian or a Jew, the mitzvah of the Master has been laid at our feet. We are to love one another as he has loved us. How has Jesus loved us? He gave his life for his companions; his friends. How do you become a companion of the King of the Jews? By obeying his mitzvah, to love. If you love as he has loved, you become his friend and you will produce fruit. What is this fruit?

But the fruit of the Spirit is love, joy, peace, patience, kindness, goodness, faithfulness, gentleness, self-control; against such things there is no law. –Galatians 5:22-23 (ESV)

No law, no mitzvah opposes such fruit.

I know what you’re thinking. Could it be that simple?

Probably not. I’m sure it’s far more complicated than I’m making it. After all, the blogosphere burns up with discussions of what Jesus meant when he said “such and thus” or how to apply the dynamic interactions of law and grace. But Jesus commanded his disciples to “go and produce fruit.” Paul in his letter to the Galatians gives us one definition of “fruit,” which is “love, joy, peace, patience, kindness, goodness, faithfulness, gentleness, self-control.” I can’t say that I’m such an expert at flawlessly producing this fruit, especially on a consistent basis, but it seems clear that I should.

It also seems clear that we all, as disciples of Jesus; as Christians, should produce this fruit as a consequence of him loving us and us loving him. Like latter-day Johnny Appleseeds, we should go about planting fruit trees, promoting kindness and generosity, and watching the fruits of our labors grow.

We should love. We must love. I know I struggle in this as much or more than most of you. It may seem strange for someone as flawed as I am to invoke and promote the love of Christ among Christians and everyone else. But if we don’t say it out loud, if we don’t declare the mitzvah in public, how will we, will I be able to take the next step and express such a love?