We live as exiles. We’re called to be pilgrims.

As he sent Adam and Eve into exile, God promised redemption and offered protection. But toil, pain, relational struggle, sin and death went with them as well, marking them and their descendants as refugees from Eden. Consider the ways in which your everyday life is not at all like the perfect paradise of that Garden. Take a few moments to list the markers of your existence as an exile by naming the broken things in your world, the brokenness in you.

The sorrow or anger that you may have felt as you named those broken things? The sinking recognition that things aren’t the way they’re supposed to be?

Those are marks of the exile experience, but they also contain a clue, a compass of sorts. Deep in our DNA, beyond rational thought or extravagant imagination, is a longing for home. Adam and Eve had it or it wouldn’t have taken sword and cherubim to protect Eden. We have it, too. This longing contains our invitation into the new identity and life direction God longs to give to his beloved exiles. This longing is designed to transform us into pilgrims.

Which word resonates with your life experience more: exile or pilgrim? Why do you say so?

Since becoming aware of the reality of God, my existence has been one of searching, traveling on a journey, walking along a path, striving toward a destination…God doesn’t promise that we’ll always be well or even safe, just that regardless of what happens to us, he will be with us, as he was with Jacob when Jacob and his family descended into Egypt. Sometimes we’re slaves. And we wait until God lifts us up again. Even if he doesn’t, blessed be the name of the Lord. I’m still walking as a pilgrim on the trail.

I’ve admitted before feeling abandoned by God, an exile in the desert, but I suppose in reality, I was the one pushing God away and not the opposite. Frankly, encountering God is scary and there have been long periods of time when I thought I’d rather not hear from Him. Ultimately though, once a person has become aware of God’s presence, avoiding such encounters is impossible. God has ways to get our…my attention and He calls us…me out of exile and into relationship.

Although Jacob suffered greatly over his lifetime, and before Pharaoh, King of Egypt, Jacob said of his life that “few and bad have been the days of the years of my life,” (Genesis 47:9) yet he calls God his “shepherd” who has guided the steps of Jacob “from my inception until this day.”

We Christians have a shepherd, the same shepherd actually, though we access God through the “good shepherd” who once walked among men and who will walk among us again.

I am the good shepherd, and I know what is mine, and I am known to those who are mine, just as the Father knows me and I know the Father and I give my life for the flock. I have other flocks that are not from this sheepfold, and I must lead them as well. They will hear my voice, and there will be one herd and one shepherd.

While Jesus admittedly came for the “lost sheep of Israel,” (Matthew 15:24), the “good shepherd” verses are widely believed to express his desire to also bring in the people from the nations, that is non-Jews, into his “flock,” though this wouldn’t begin to occur until some years after his death, resurrection, and ascension. While Israel has many covenants with God that establish their relationship with Him, it is only through Israel’s first-born son, the Moshiach, the “Notzri,” Jesus that we who are from outside Israel have been brought near to Israel and to God.

I don’t mean to imply that there are two roads to salvation, one for the Jewish pilgrim and one for the Gentile, and in fact, as he was dying, Jacob explained everything to his sons about the centrality of Messiah, and because of the Torah, we hear his voice, too.

The scepter shall not depart from Judah nor a scholar from among his descendants until Shiloh arrives and his will be an assemblage of nations.

Perhaps a slightly different translation will be more illuminating.

The scepter shall not depart from Judah, nor the lawgiver from his descendants, until the Moshiach comes . . . 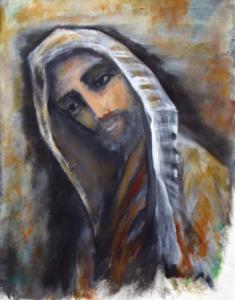 These words are widely believed in Judaism to be the primary source indicating that the Messiah will come to restore justice and that even the nations will pay homage to him with gifts. As the midrash states:

…the word Shiloh is a composite of the words “a gift to him” (in Hebrew), a reference to the King Messiah, to whom all nations will bring gifts. This verse is the primary Torah source for the belief that the Messiah will come, and the rabbis always referred to it in the Middle Ages…

…the sense of the verse is that once Messiah begins to reign, Judah’s blessing of kingship will become fully realized and go to an even higher plateau (Sh’lah). At that time, all the nations will assemble to acknowledge his greatness and pay homage to him.

This is quite similar to how Christians believe that Jesus will return and establish his Sovereign rule over all the earth. Remarkable how none of this paints a portrait of the faithful in exile but rather a people who are following a King.

They led the boat to the land, and they left everything and followed him.

Our existence is one of searching, traveling on a journey, walking along a path, striving toward a destination. Although most of us don’t literally leave everything behind, home, family, job, to follow him, when we commit our lives to pursuing holiness by walking in the footsteps our Master left in the dust, who we are and how we live are never the same again. Our every sin is illuminated by a stark, white light, our imperfections are covered in dripping scarlet, we are always aware of our faults and our shortcomings, and maybe it is out of that awareness we sometimes feel exiled from God’s presence, for how can the pure and the impure co-exist?

But through repentance, we are offered a way out of the darkness, through teshuvah we are once more made clean. God offers us a path that we may journey from the mundane to the magnificent. Each day we have the opportunity to travel with a companion. He is only far off when we push him away, and he draws near the instant we call with sincerity.

…but there is a friend who sticks closer than a brother.

–Psalm 145:18 (from the siddur; weekday morning and afternoon prayers)

Although many times when we desire God the most, we don’t get a sense of His presence. But putting the limitations of our perceptions aside, God is as near to us or as far from us as we want Him to be. If what we want most in our lives is God, He is there. If we have other more pressing priorities, God will stand aside. If we are in exile, it is one of our own making. God has already made the path for us to be with Him. All we have to do is decide to walk on it.

4 thoughts on “A Line as the Unending Horizon”