In this almost painfully beautiful book…Fishbane…explores the question of the kind of canon, privileged status, or Logos, the Torah actually has for the post-modern Western Jew. It…is a moving, personal apologia…

Pastor Randy recommended Michael Fishbane’s book The Garments of Torah to me more than once and I finally decided to buy it. He said he hasn’t read it in many years but recalls Fishbane’s book having a profound effect on him. I’m going to try to give you a taste of the effect it’s having on me.

This isn’t a full book report. I’ve only read one chapter so far. Fishbane’s book is only 168 pages long but it’s hardly what you’d call “light reading.” The first chapter, Inner-Biblical Exegesis: Types and Strategies of Interpretation in Ancient Israel is dense with information and erudite in its writing, so I find I need to read slowly and carefully in order to grasp what is being said by the author.

Hence my writing this blog post as a series of “notes” just to offer some of my impressions. It’s interesting though that I find a sort of association between what Fishbane is presenting so far and what I wrote about in The Jewish Gospel, Part 1 and Part 2.

I want to say before proceeding that there is a likelihood that I’ll misinterpret some of what I’m trying to explain about what Fishbane’s is saying. In that case, I don’t doubt some of my more scholarly readers will step in and point out where and how I could do better. Thank you in advance for your efforts.

One of the great and most characteristic features of the history of religions is the ongoing reinterpretation of sacred utterances which are believed to be foundational for each culture. So deeply has this phenomenon become part of our modern literary inheritance that we may overlook the peculiar type of imagination which it has sponsored and continues to nurture: an imagination which responds to and is deeply dependent upon received traditions: an imagination whose creativity is never entirely a new creation, but one founded upon older and authoritative words and images.

It’s interesting that Fishbane uses this block of text to begin a chapter on inner biblical exegesis, since it summons images of learned Rabbis crafting new Talmudic interpretations of the Torah in response to the demands of a changing world. But Fishbane is discussing how later portions of the Bible were crafted based on traditional understandings of earlier portions, at least as I read this chapter. The rationale for doing so is also very “Jewish” (I say this last part for the sake of my Christian readers).

…if not tradition’s realization that there is no authoritative teaching which is not also a source of its own renewal, that revealed teachings are a dead letter unless revitalized in the mouth of those who study them.

If we don’t reinterpret (some might say “reinvent”) the Bible through the study and perceptions of the scholars and students of the present age, does it become a “dead letter?” Many people, both Christians and Jews, believe so, but clergy and scholars who are literalists tend to believe that reinterpretation throws out the baby with the bath water, and that making scripture more “relevant,” also robs the Bible of its power and holiness.

But even this mythification of a chain of legitimate interpreters did not so much obscure the distinction between Revelation and Interpretation as underscore it. From this perspective, the interpretative traditions of ancient Judaism constitute a separate, non-biblical genre: a post-biblical corpus of texts which stand alongside the Sinaitic revelation as revelation of new meanings through exegesis.

I know that’s going to disturb and even scare some folks. Fishbane is describing his views on how Pharisaic Judaism (which doesn’t have many fans in the church) attempted to minimize the gap between divine Torah and human interpretation by performing what I have called the rabbinization of Abraham. From an outsider’s point of view, it seems this must require more than a little sleight of hand and violates any sort of sola scriptura approach. 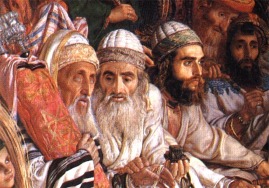 From this perspective though, the early Rabbis could be considered the “guardians of Torah” and according to Fishbane, the discovery of the Qumran documents may lend credence to the idea that the foundation texts upon which the later portions of the Tanakh (Old Testament) were written have already been interpreted and such “scribal intrusions” actually open a window and allow us to look into both the world of the early Torah authors as well as those who came after them. Examination of newly recovered ancient texts and how they comment on even older texts illustrates a process where the scribes, interpreters, and traditions became integrated components of Divine revelation.

The process of the intercultural transmission of traditions may be considered one of the primary areas in which authoritative teachings or memories were received and revalued for new generations.

Recall in my commentary on Boaz Michael’s presentation Moses in Matthew how this process was illustrated by the apostle Matthew. Knowledge of traditions about the Creation and Moses being drawn from the water and parting the Reed Sea were a necessary component of correctly interpreting the deeper meaning of Jesus walking on water (see The Jewish Gospel, Part 1). Earlier Biblical text and the traditions surrounding how those scriptures are interpreted seems to be woven into the fabric of the apostle’s Matthew 14:22-33 account.

For if scribalism points to the fact that ordinary textual ambiguity or openness may serve to catalyze commentary and that these supplements, when incorporated into the received text, reflect the cultural dynamics of transmission, then law and theology, where the frequent incomprehensibility or non-comprehensiveness of divinely authorized rules requires human exegesis and expansion, offer an even richer sphere of study.

I can see two ideas coming from that one sentence. The first is that the uncertainty about particular laws in Torah and how to actualize them may have actually enhanced discussion among sages and scholars resulting in developing a tradition on how to perform the mitzvot based on those commentaries. Tradition first becomes the lens by which Torah ambiguities are examined and finally becomes an element of the revelation itself (though a separate “genre” existing alongside scripture, according to Fishbane). But Fishbane can also be saying that one older section of the Bible such as a prophesy can be refactored and applied anew to a later occurrence, such as Matthew referencing Hosea 11:1 and applying it to Jesus in Matthew 2:15 as possibly based on the ambiguous interpretation of the older scripture.

Not only does tradition resolve Biblical ambiguities but it allows for older prophesies to be reinterpreted in such a way that later portions of the text can connect back to entire ideas and images associated with earlier writings.

The terse formulation prohibiting Sabbath labor found in the Decalogue, Exod. 20:18-21, is taken over virtually verbatim in the Mosaic citation of it in Deut. 5:12-14…But even Moses’ recitation of the ancient rule…does little to explicate the details of prohibited work.

(I should mention as an aside, that D. Thomas Lancaster’s book The Sabbath Breaker: Jesus of Nazareth and The Gospels’ Sabbath Conflicts which I previously reviewed, also addresses the struggle in comprehending that is considered “forbidden work” within the context of the acts of Jesus in the gospels.)

Fishbane suggests that the ambiguity regarding forbidden work on the Sabbath was later addressed in passages of Jeremiah in an attempt to achieve a resolution (see Jeremiah 17:19-27). Attempting to go into more detail would just result in me either including longer quotes from Fishbane’s chapter or essentially rewriting Fishbane in this blog post. The point is to get you to turn your attention to his book so you can see what you think of his viewpoint for yourself (Well, that’s not the whole point of me writing this. I’m also just trying to get my brain around this topic).

However, among his many examples of Inner-Biblical exegesis is this:

As an example, we may consider 2 Chron. 15:2-7, a speech which one Azzariah ben Oded delivers an oracle to King Asa of Judah.

This prophetic discourse (as also the prophet in whose name it is spoken) is unknown to earlier biblical sources, and appears to reflect the pseudepigraphic handiwork of the Chronicler who has woven together several strands of tradition in order to confront his contemporary readership (in the Persian period) with a matter of “prophetic” concern to him. 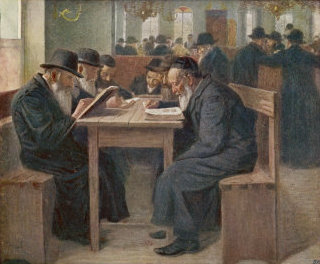 This seems to harken back to books such as Who Wrote the Bible by Richard Elliott Friedman which considerably blur the lines between God-inspired text and the human, social, and political requirements of the authors involved. The tradition for interpretation of the text ultimately becomes part of the revelation itself and we can’t always see where the inspiration of God leaves off and the authorship of the actual human writers (and their various priorities) begins. We only know that how the Jewish people came to understand their Bible scriptures (which is certainly true by the time of Jesus) was inseparable with the interpretative traditions of the text itself.

In fact, those traditions were well used by later Jewish Bible writers such as Matthew (and I mentioned this earlier) in order to communicate important ideas to the audience. To do away with those traditions involving inner-biblical exegesis and return to a strictly literal reading of the text in isolation both from tradition and other sections of the Bible, strips away the vast majority of the meaning from what the Bible is communicating. It becomes virtually impossible to understand what Matthew is really writing about Jesus unless we A) refer to previous sections of the Bible, and B) engage the interpretative traditions associated with those older portions of scripture as applied to the later texts.

Seemingly agreeing with the Moses in Matthew presentation and Boaz Michael’s viewpoint, Fishbane tells us that referencing these older sections of the Bible in later writings re-contextualizes them to apply to (apparently) people and events to which these older scriptures didn’t originally reference (the aforementioned Hosea 11:1 and Matthew 2:15).

And those are my notes on only one chapter made up of fifteen pages in Fishbane’s book. Not the most amazingly cohesive blog post I’ve ever written, but then there’s quite a lot to digest. However, when compared to other opinions and ideas about the Jewish view of the Bible, and particularly the Jewish view of the midrashic linkage between the Tanakh and the apostolic scriptures, we should experience several “Ah-ha” moments in our understanding as the ideas from The Garments of Torah begin to sink in.

I’m looking forward to the rest of Fishbane’s book.

Addendum: I know I’m probably playing fast and loose with Fishbane’s chapter, but these are more my impressions about what I’m reading and the associations sparked by his writing, than a detailed, “nuts and bolts” analysis.