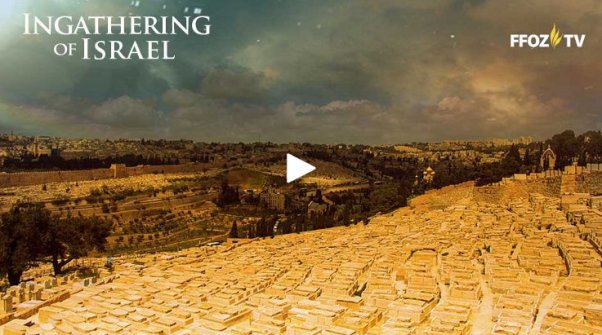 Episode 07: The shofar (ram’s horn) is probably the most intriguing and accessible of all Jewish ritual elements. Episode seven will show viewers that it is this great trumpet that will sound when Jesus finally returns to earth. The ram’s horn call will announce the ingathering of Israel, the return of the Jewish people back to their land. But this event, the ingathering of exiles, has significance not only for the Jewish people but for all non-Jewish believers in Messiah as well. We will all be raptured to Jerusalem.

-from the Introduction to FFOZ TV: The Promise of What is to Come
Episode 7: Ingathering of Israel

The Lesson: The Mystery of the Ingathering of the Elect

This episode looks at two related events: the second coming of Messiah and the ingathering of Israel. The episode is too short to really do justice to this topic. Whole books have been written on the second coming and all that it means. Thus, episode seven focuses on just a few key ideas within this vast area of information about the end times.

The first topic is the idea that a trumpet will be blown to herald the return of Messiah.

Then the sign of the son of man will appear in heaven, and all the families of the earth will mourn, and they will see the son of man coming with the clouds of heaven in power and great glory. He will send forth his angels with the sound of the shofar; they will gather his chosen ones from the four winds, and from one end of heaven to the other.

FFOZ teacher Toby Janicki originally read these verses from the ESV Bible and in choosing to use the Delitzsch Hebrew Gospels, I’m tipping his hand a bit, but not too much.

In those verses, Toby tells us that Jesus actually was stringing together a number of different Old Testament (Tanakh) prophesies, which was a common way of teaching in the late Second Temple period. For the purposes of this episode, Toby focuses on verse 31, though I hope future episodes flesh out the other prophesies mentioned:

And he will send out his angels with a loud trumpet call, and they will gather his elect from the four winds, from one end of heaven to the other. (emph. mine)

Since these episodes are dedicated to viewing New Testament concepts through a Jewish lens and the original Jewish context of the Biblical prophecies, we focus on the trumpet as something that many Christians may not understand. Pursuing the first clue, Toby takes us to 1 Thessalonians 4:16:

For the Lord Himself will descend from heaven with a shout, with the voice of the archangel and with the trumpet of God, and the dead in Christ will rise first.

Again, this trumpet is mentioned, but what is the trumpet and where did Jesus and Paul get the idea that a trumpet would be blown at the second coming of Messiah? Did they just make it up? Was it a new revelation?

Here we have the trumpet again, The prophet Isaiah is associating its being sounded with the coming of Messiah and the ingathering of those who were scattered in the land of Egypt. And this provides our first clue.

Clue 1: Jesus’s words about a trumpet blast and gathering of the elect are from Old Testament prophecies.

For our next clue and to discover more about the trumpet, the scene shifts to Israel and FFOZ teacher and translator Aaron Eby. Aaron shows the audience a shofar or a ram’s horn, which today, is a common item that is sold in many tourist shops in Israel. Most Christians are at least somewhat familiar with the shofar, but for those who aren’t, Aaron describes its origins.

However, it’s not a horn in the classic sense. It’s used for signaling, not music. The ram and ram’s horn first appear in Genesis 22 at the Akedah or the Binding of Issac. Aaron tells us that we also see it (or hear it) in Exodus 19:16 during the giving of Torah at Sinai, in Leviticus 22:24 when describing the holiday of Rosh Hashanah, which is a “holiday of remembering” and a “time of (shofar) blasting,” and in Leviticus 25 in recounting the details of the Jubilee Year.

The shofar is used on special occasions to signal fasting and repentance, to sound a warning, to indicate that an extremely important event is about to take place. In Exodus, Israel heard the sound of a loud shofar as the Divine Presence descended on Sinai in fire and great power. We see both in 1 Corinthians 15:51 and 1 Thessalonians 4:16 that the shofar will also be sounded at the return of Messiah, and will signal the raising of those who died in Christ.

We return to Toby now and the second clue.

Clue 2: The great trumpet is the shofar used in the Bible to announce important events.

From here, we move on to the second topic of interest: the identity of the exiles and the elect who will be ingathered. Who are they? Are they Christians? Jews? Both? Most believers think that it is anyone who is a Christian, and that we’ll all fly up to meet Jesus in the air, and then be raptured into Heaven.

But let’s look at what the Bible has to say:

“Ho there! Flee from the land of the north,” declares the Lord, “for I have dispersed you as the four winds of the heavens,” declares the Lord. “Ho, Zion! Escape, you who are living with the daughter of Babylon.” For thus says the Lord of hosts, “After glory He has sent me against the nations which plunder you, for he who touches you, touches the apple of His eye. For behold, I will wave My hand over them so that they will be plunder for their slaves. Then you will know that the Lord of hosts has sent Me. Sing for joy and be glad, O daughter of Zion; for behold I am coming and I will dwell in your midst,” declares the Lord.

The identity of the exiles and the elect is in verse ten, “Sing for joy and be glad, O daughter of Zion…” This can only be the Jewish people. The four winds of the heavens, according to Toby, is a poetic way of saying “from the four corners of the Earth,” indicating that the exiled Jewish people will return to Israel from all the places on the planet to which they had been exiled. This will be accomplished by angels, according to the prophecy, so when Messiah returns, he sends out his messengers to finish the return of the exiles to their Land, the return of all the Jewish people everywhere to Israel.

I think Toby’s right when he says that the first fruits of the ingathering began with modern Zionism and the creation of the modern state of Israel. For over sixty years, Jews from every nation on Earth have been making aliyah and returning to their rightful homeland. However, the return of the exiles will not be complete until all the Jewish people are returned to Israel to live in peace.

Since this television show is produced primarily for a Christian audience, Toby asks the question most viewers will be asking themselves at this point: What about us? What about the Christians?

“Many nations will join themselves to the Lord in that day and will become My people. Then I will dwell in your midst, and you will know that the Lord of hosts has sent Me to you. The Lord will possess Judah as His portion in the holy land, and will again choose Jerusalem.” 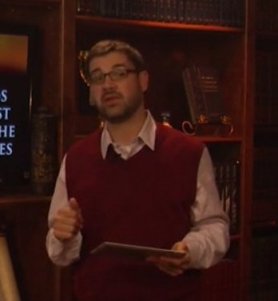 No, not to Heaven at all, but to the Land of Israel, where we’ll celebrate the Return of our King.

I’m sure this part of the program will raise more than a few eyebrows of the many Christian viewers since it gives quite a different interpretation of a popular Christian teaching. The idea is that when Jesus returns, we get to escape the worst of the bad times by going to Heaven, leaving behind those who are unsaved.

Toby doesn’t address this at all, and the absence of any mention of not being raptured to Heaven makes me believe that more on the second coming and the end times will be covered in future episodes of this series. When this episode first aired, I can only imagine that FFOZ received many emails, letters, and phone calls asking why they are teaching about the rapture this way.

And we have the third and final clue:

Clue 3: The elect are the Jewish people and Gentile believers will also be gathered to Jerusalem by Messiah.

I’ve never been comfortable with the modern Christian doctrine of the rapture, so episode seven provided me with an alternate explanation that frankly, sounds a lot more reasonable than taking the escape hatch to Heaven while letting the rest of humanity suffer. Of course people who are very interested in the end times and the rapture are bound to have a lot of questions about all this, and as I mentioned before, the Christian audience is likely to be surprised and maybe even dismayed by Toby’s interpretation of events. For me, I’d rather be partying in Jerusalem with the King.

But I also wonder exactly what role the Gentile Christians will play in returning the Jewish exiles to Israel. To me, it’s clear that all the Jewish people will live in the Land and regularly make pilgrimages to Jerusalem to pay homage to the King. But after the initial celebration is over, where do the Gentiles go? Back to our homes in the lands where we live? That seems reasonable, but then, why are we “raptured” to Jerusalem in the first place?