The writer of the book of Hebrews maintains that the animal sacrifices offered in the Temple cannot grant forgiveness for the world to come or the reward of eternal life. If so, why did God command the Israelites to offer sacrifices? What were the sacrifices supposed to accomplish?

This sermon marks one year in Beth Immanuel’s study of the epistle to the Hebrews, so it features a brief review of the first eight chapters of the book.

-D. Thomas Lancaster
Sermon Thirty-Five: The Blood of Bulls and Goats
Originally presented on December 21, 2013
from the Holy Epistle to the Hebrews sermon series

Since Lancaster delivered this sermon on the one year anniversary of starting this series on Hebrews, he spent the first fifteen minutes giving a summary of what he’d taught over the course of the past twelve months. I wish I could have taken notes fast enough to capture the review because it would have been a nice “in-a-nutshell” presentation to offer. You’ll just have to click the link I posted above and listen for yourself.

The Holy Spirit is signifying this, that the way into the holy place has not yet been disclosed while the outer tabernacle is still standing, which is a symbol for the present time.

According to Lancaster, most Christians take away from the above-quoted verses the idea that the only way to get into the Holy Place, that is, the life in the world to come, is for the Temple (although the NASB translates the Greek as “tabernacle”) to be destroyed. This fits pretty well with traditional Church doctrine about the Temple in Jerusalem needing to be destroyed because the bodies of Christians are now the “Temple,” but Lancaster disagrees. Within the overall context, that interpretation makes no sense.

The way he sees it, what the writer of the epistle to the Hebrews is saying is that the Tabernacle or Temple, the outer holy place simply stands as a symbol for the present age, the Old Covenant age, since the New Covenant while inaugurated, has not actually come into our world yet. You’ll have to go over what last week’s sermon said about the symbolism involved in comparing the Holy Place with the Holy of Holies, that is, the present age and the age to come (or read my review to get the gist of Lancaster’s points) in order to make sense of what’s being communicated.

But when Christ appeared as a high priest of the good things to come, He entered through the greater and more perfect tabernacle, not made with hands, that is to say, not of this creation… (emph. mine)

The NASB translates the words I emphasized in the above-quoted verse fairly accurately, but the NIV says “are now already here”, and the NLT and ESV (and a number of other translations) say “that have come,” seemingly indicating that when Christ appeared, the better promises of the New Covenant age arrived in their fullness. That’s not what the Greek actually says, and both the NASB and the KJV render that phrase correctly. They haven’t arrived yet.

As I’ve said before, interpretation begins at translation, and more than a few Bible translators have read their own theology and doctrine back into the Bible rather than letting the Bible in its original languages speak to them about how that theology is supposed to look.

This next part was news to me but it makes a great deal of sense now, especially when compared to what Lancaster has previously taught in this series of lessons. He described the following scriptures as a Kal Vachomer or lighter to heavier argument. In this argument, you say something like, “if you think version 1 was fabulous, version 2 is even better”. The first statement about version 1 (or whatever) must be true in order for the statement about version 2 to be true.

…and not through the blood of goats and calves, but through His own blood, He entered the holy place once for all, having obtained eternal redemption. For if the blood of goats and bulls and the ashes of a heifer sprinkling those who have been defiled sanctify for the cleansing of the flesh, how much more will the blood of Christ, who through the eternal Spirit offered Himself without blemish to God, cleanse your conscience from dead works to serve the living God?

For this reason He is the mediator of a new covenant, so that, since a death has taken place for the redemption of the transgressions that were committed under the first covenant, those who have been called may receive the promise of the eternal inheritance.

Christians don’t understand the meaning behind the sacrificial system initiated with the Tabernacle and continued with Solomon’s and Herod’s Temples. We’ve been taught that the Israelites had to make sacrifices for the forgiveness of sins and so they could get into Heaven when they died. Once Jesus came and made a single sacrifice on the cross once and for all, then there was no further need for the animal sacrifices or the Temple, since all we have to do is believe in Jesus for the forgiveness of sins.

But what Lancaster said next is no less than revolutionary.

The sacrifices in the Tabernacle and the Temple were never designed to take away sins at all. They were designed to provide purification for an Israelite (actually, anyone since even the sacrifices of Gentiles were accepted) so that he or she could physically draw nearer to the specific, Holy precinct where the physical manifestation of the Divine Presence dwelt. The mikvah, the ashes of the Red Heifer and so on, were to provide the body of a person with ritual purification so that their physical, material self could enter a physical structure considered Holy ground because it contained the manifestation of the Divine Presence of the Almighty. This is an effect of the Sinai (Old) Covenant.

Compare and contrast that to the sacrifice of Yeshua (Jesus) who made total atonement for the sins of all humanity by bringing his blood, not to the Holy of Holies in the Earthly Temple, but to the Heavenly Holy of Holies, so our sins really could be permanently forgiven and that our spiritual selves could approach God in a realm outside the physical universe, and we can serve Him. This is an effect of the New Covenant.

There will no longer be any curse; and the throne of God and of the Lamb will be in it, and His bond-servants will serve Him.

These two systems, two structures, two forms of sacrifice were made to operate like two sides of a coin, not for the latter to wholly replace the former, at least not until the end of the Messianic Era which will see us pass on through eternity when we’ll no longer need a Temple:

I saw no temple in it, for the Lord God the Almighty and the Lamb are its temple. And the city has no need of the sun or of the moon to shine on it, for the glory of God has illumined it, and its lamp is the Lamb. The nations will walk by its light, and the kings of the earth will bring their glory into it.

But none of that will happen while the current Heaven and Earth exist, which they will throughout the present age and the age of the Messiah.

For if the blood of goats and bulls and the ashes of a heifer sprinkling those who have been defiled sanctify for the cleansing of the flesh, how much more will the blood of Christ, who through the eternal Spirit offered Himself without blemish to God, cleanse your conscience from dead works to serve the living God? (emph. mine) 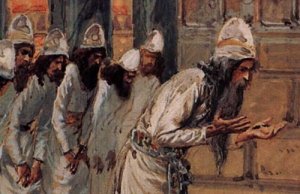 You can see the lighter and heavier ends of the argument on either side of the text I emphasized above. If the blood of goats and bulls and ashes of a heifer can purify your bodies to come within proximity of the physical manifestation of the Divine Presence in our material world, how much more will the blood of Messiah purify your eternal Spirit to cleanse you of dead works (that is, sin) so that you can serve the living God. Purifying your body vs. purifying your spirit. The Earthly sacrifices did one and the one Heavenly sacrifice did the other. The blood of Jesus didn’t replace the blood of animals. To believe it did would be like comparing proverbial apples and oranges.

What comes next is the letter writer’s conclusion of the current argument:

For this reason He is the mediator of a new covenant, so that, since a death has taken place for the redemption of the transgressions that were committed under the first covenant, those who have been called may receive the promise of the eternal inheritance.

So all that was written before is the reason why Jesus is the mediator of the New Covenant, because as you may recall, the New Covenant is all about replacing our stony hearts with hearts of flesh, and giving us a new Spirit, writing the Torah of God on our hearts, permanently atoning for all sins, and allowing us to know God in an unparalleled manner greater than the greatest prophets of old.

We committed sins that were defined and identified by the Sinai covenant and that covenant condemns unrepented sin. We will die if our sins are not atoned for because the wages of sin is death. But the New Covenant offers something the Old did not, a way to permanently atone for and be forgiven of all sins, so where the Old Covenant condemns, the New Covenant, which is already beginning to enter our world, sets free. They work together in the present age. We have access to this forgiveness through our faith in the work of the Messiah. This is how we receive the promise of the eternal inheritance.

6 thoughts on “Sermon Review of the Holy Epistle to the Hebrews: The Blood of Bulls and Goats”