The Jewish people in the land of Egypt had sunk to the lowest possible level of impurity — so much so that it was nearly impossible to distinguish between Jew and gentile. And then, suddenly, Hashem pulled them out from beneath all their impurity, and they were free — ready for a new beginning and spiritual greatness.

One must remember that no matter how far he has sunk, and as hopeless as his situation may seem, he has still not descended to the level of his forefathers in Egypt. His spiritual predicament cannot be worse than theirs. He must remind himself of the Exodus and internalize its meaning. He can then look toward the time when Hashem, in His mercy and in His kindness, will simply lift him up, freeing him from his seemingly hopeless state, and allowing him to begin his spiritual ascent anew.

-from “A Closer Look at the Siddur,” p.43
Thursday’s Commentary on Parashas Acharei
A Daily Dose of Torah

I know I’ve said this before, but I really enjoy studying from the Jewish texts, at least those I’m capable of comprehending. In reading the studies contained in “A Daily Dose of Torah” I find myself again drawn toward Judaism as a method of study, a way of understanding God, and even as a lifestyle. In Judaism, there seems to be such a great richness of tradition and apprehension of faith, trust, and obedience that much of Evangelical Christianity lacks.

I live with a Jew. Actually, right now, I live with three of them, but only my wife is the least bit religious. Only she regularly worships at synagogue on Shabbat, and this is as it should be because, after all, she’s Jewish. It’s a commandment from Sinai given to Israel, and as a Jew, she is part of Israel.

I, on the other hand, have great difficulty being obedient even to those commandments I know unequivocally apply to all people of the nations as well as to the non-Jewish disciples of Yeshua. How could I ever hope to attain the level of obedience and devotion expected of a Jew?

No, it’s not that Jewish people are perfectly obedient and devoted, but any Gentile aspiring to any sort of Jewish “lifestyle” might want to take stock of how they’re doing as a Gentile first before having the chutzpah to believe he or she can voluntarily take on board the much greater responsibilities and duties God requires of the Jewish people.

A Jew is born into the covenant whether he or she wants to be or not. They’re not given a choice. Any Gentile considering conversion certainly is making a choice and, like deciding to get married, cannot possibly see the long-term results and consequences of such a monumental decision.

The same goes for Gentiles who remain Gentiles but, through one thought process or another, come to believe they can or should either voluntarily take on board some, most, or all of the Torah mitzvot, or who have decided for themselves that they are (somehow) equally obligated to the mitzvot in the manner of the Jews. 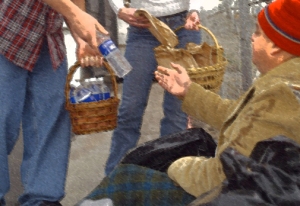 Really, are you doing so well at a lesser level of obligation and obedience that you need the additional challenge in your life? Has doing charity, feeding the hungry, comforting the grieving, abstaining from even the hint of lashon hara (evil speech, gossip, denigrating another human being through words) become so humdrum and boring that you require adopting the higher standards of Torah in order to keep your life from becoming mundane?

When I take stock of my life, day by day, I realize how limited I am and how even those requirements Hashem has placed upon the people of the nations sometimes seem far beyond my abilitites. Why do I think I’d do any better in davening three times a day with a minyan, donning tzitzit, laying tefillin, observing Shabbos, keeping glatt kosher, and many of the other mitzvot of Torah?

He explains that both Shabbos and Mikdash (the Sanctuary) represent a dimension of love between Hashem and His nation, the former in time and the latter in space. On Shabbos, Hashem, as it were, invites every Jew to spend the day in His House, to live in the holiness of Hashem’s embrace and bask in his radiance. The Mikdash, too, represents this loving relationship, as symbolized by the two Cherubim that faced each other in the Sanctuary’s innermost chamber, the kodesh hakodashim.

-from “A Mussar Thought for the Day,” p.99
Thursday’s Commentary on Parashas Kedoshim
A Daily Dose of Torah

I have to recognize that, while God loves the whole world and while the Gentile disciples of Messiah are also loved and cherished by Hashem, it is Israel who receives a special love and relationship with the Almighty, and without Israel’s “chosenness,” we Gentiles would have no hope at all. Thus, God has given His people Israel, the Jewish people, special gifts as well as special obligations, in this case, Shabbat and the Holy Temple.

It’s not that we Gentile believers won’t have a role or a place in either in future Messianic Days, it’s just that we shouldn’t forget where they came from or to whom they were given.

This date marks the death of Judah P. Benjamin (1811-1884), an American-Jewish statesman. Benjamin was the second Jew to serve in the U.S. Senate, representing Louisiana. When another senator accused him of being an “Israelite in Egyptian clothing,” Benjamin, who had married into a prominent Roman Catholic family, replied: “It is true that I am a Jew, and when my ancestors were receiving their Ten Commandments from the immediate Deity, amidst the thundering and lightnings of Mount Sinai, the ancestors of my opponent were herding swine in the forests of Great Britain.”

-from “This Day in Jewish History,” Iyar 11
Aish.com

Judah Benjamin’s reply to his fellow senator is as relevant today as when he first spoke those words.

I suppose in some sense, this is why my wife goes to shul on Shabbos and I stay home, mow the yard, and try to fix the broken sprinkler system so that I can water our lawn. It’s not that I’m necessarily forbidden from worshiping with my wife. After all, there are plenty of intermarried couples, both at the Chabad, and at our local Conservative/Reform synagogue. It’s just that it’s more important for her to observe the mitzvot associated with Shabbos than it is for me, because she is a Jew and I’m not.

Even if I somehow believed that the Shabbat is also incumbent upon me as a Gentile, the Jewish people kept and preserved the Shabbat for thousands of years, while the ancestors of every non-Jew alive today were worshiping pagan gods, consorting with heathen temple prostitutes, and in some cases, feeding their children to sacrificial fires in obscene fertility rites.

We have no worthiness or honor of our own not did our forefathers. It is only through God’s abundant mercy and kindness that He provided any way at all for the Gentile to even approach His Throne in the most humble and penitent manner.

Let us strive to improve ourselves and to become obedient to those few things God requires of the Gentile disciples. If we can master our yetzer hara and if there are more requirements and more gifts Hashem wishes to assign to us, we will receive them from the hand of Messiah in all due time.