A tenured Wheaton College professor who, as part of her Christian Advent devotion, donned a traditional headscarf to show solidarity with Muslims has been placed on administrative leave.

Actually, she never wore a hijab, just a scarf, but her actions probably won’t endear her to a lot of Christians and Jews. However, it’s important to take a moment to understand why she did what she did.

Larycia Hawkins, a political science professor at the private evangelical Christian college in Chicago’s west suburbs, announced last week that she would wear the veil to show support for Muslims who have been under greater scrutiny since mass shootings in Paris and San Bernardino, Calif.

“I stand in religious solidarity with Muslims because they, like me, a Christian, are people of the book,” she posted on Facebook.

Hawkins, 43, planned to wear the hijab everywhere she went until Christmas, including on her flight home to Oklahoma, where voters in 2010 overwhelmingly approved a constitutional amendment banning Islamic Sharia law.

She said it’s “a time of real vitriolic rhetoric by fellow Christians sometimes and people who aren’t Christian who conflate all Muslims with terrorist — and that saddens me — so this is a way of saying if all women wear the hijab we cannot discriminate. If all women were in solidarity, who is the real Muslim? How is TSA going to decide who they really suspect?”

I’m probably going to take a lot of heat for even writing this blog post, but I think Hawkins may have a point. My wife periodically shops at a Muslim owned food store here in Boise. As a Jew, she says she has no reason to fear or be suspicious of the owner, who seems like a really nice guy, but there’s some part of her that’s wary anyway.

Before it burned down, my family and I used to frequent the Boise International Market, a collection of businesses maintained by various refuge families.

I particularly enjoyed having coffee with a friend periodically at Kahve Coffee, which if I’m correct, was owned and operated by two brothers who, in all likelihood, are Muslims.

Granted, I can’t read minds and automatically know the motivations of everyone I encounter, but as far as I could tell from casual conversation, Kahve Coffee and the other family owned businesses in the Market, represented people who came to this country to build a better life and become part of our community.

Of course, these refuges were from all over the Middle East, Africa, and Central America, so probably they weren’t all Muslims, but I’m not sure it really mattered one way or the other. What mattered, is that the Market wasn’t just a place to eat, drink coffee, and buy various other goods and services, it was a gathering place for all of these families and probably their second home.

There were always children playing between the shops, the kids of the business owners. Everyone watched out for everyone else’s kids. It wasn’t always a venue conducive to quiet conversation. It was more like having coffee or a meal in someone’s living room while their children were playing.

I’m writing all this to say that, religious and political differences aside, at the end of the day, the people who ran the Market were people, parents, uncles and aunts, grandparents, children. They were people just like we’re people.

I hear they’re rebuilding (website under construction). I hope so. Not just for the sake of some of the best coffee I’ve ever consumed, or the ability to have a meal that isn’t mass-produced American pap, but for the sake of people who, like all of our ancestors who came to this country at some point in the past, just want to make a living, support their families, and be friends and neighbors who happen to live in my little corner of Idaho. 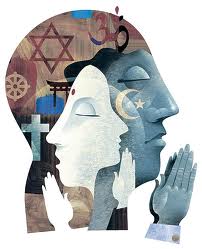 As far as Professor Hawkins is concerned, Wheaton College chose to look at things differently:

“While Islam and Christianity are both monotheistic, we believe there are fundamental differences between the two faiths, including what they teach about God’s revelation to humanity, the nature of God, the path to salvation and the life of prayer,” Wheaton College said in a statement.

Makes me wonder what Wheaton College would have done if Hawkins decided to dress frum to support Israel and the Jewish people.

Granted, Wheaton is a private Evangelical Protestant Christian liberal arts college, and they can make decisions based on their understanding of being Christian vs. being Muslim, but they might have handled this differently. Was what Hawkins did so radical and her reasoning so out-of-balance?

Wheaton administrators did not denounce Hawkins’ gesture but said more conversation should have taken place before it was announced.

“Wheaton College faculty and staff make a commitment to accept and model our institution’s faith foundations with integrity, compassion and theological clarity,” the college said in a statement. “As they participate in various causes, it is essential that faculty and staff engage in and speak about public issues in ways that faithfully represent the college’s evangelical Statement of Faith.”

The Wheaton College administrators are within their rights to take such an action, and after all, as faculty, Hawkins does represent the college, but not everyone agrees with Wheaton’s decision.

Gene Green, a professor of the New Testament, said what motivated Hawkins is the same concern many faculty at Wheaton share about the unfair scrutiny facing the Muslim community.

(Renner) Larson (communications director for CAIR’s Chicago chapter), who attends a Unitarian Universalist church, said he was dismayed to hear that some view Hawkins’ gesture as compromising Christianity.

“It’s disappointing that showing solidarity means that you are somehow sacrificing your own identity,” he said. “I do what I do not to be closer to Islam but because it makes me closer to my identity as an American who believes in American ideals.”

I can only imagine that what I’m expressing may seem radical to some of my readers, but as Larson pointed out, it’s an American ideal to accept people who are different from you into our local communities. The vast majority of American citizens have ancestors who came here from other parts of the world. That some Muslims have committed terrible crimes here and elsewhere on our planet doesn’t make your Muslim neighbor a terrorist.

In fact, having just read a story from Arutz Sheva, I discovered the most unlikely people (at least from my uninformed point of view) can be heroes or criminals.

You can’t tell by looking.

9 thoughts on “The Day a Christian Wore a Hijab”