For I do not want you, brethren, to be uninformed of this mystery—so that you will not be wise in your own estimation—that a partial hardening has happened to Israel until the fullness of the Gentiles has come in; and so all Israel will be saved…

I hold a minority opinion in terms of understanding what “all Israel” means in this context. I think that, based on the New Covenant promises (Jer. 31, Ezek. 36) God intends to save all Israel, that is, all of the Jewish people. But if you’re a Christian, this doesn’t seem quite right. Shouldn’t I mean “all of the Jewish people who confess Jesus as Lord and Savior?”

But that doesn’t seem right either, because this flies in the face of the language in the aforementioned New Covenant, which promises a return of the Temple, the Levitical priesthood, and the sacrifices. If the “law were nailed on the cross with Jesus,” then all of those covenants, including the New Covenant, and the attached promises don’t make sense.

In fact, I could argue that a Jew who converts to Christianity, a Hebrew Christian, might not be considered “Israel” at all if they have been taught (by well-meaning but misguided Gentile Christians) to abandon the very covenants that define the Jewish people and Israel. There’s a lot more to being a covenant people than just your DNA.

Fortunately, I came across a comment made by reader “ProclaimLiberty” (PL) on the Rosh Pina Project blog post Messianic Jews Must be Consistent in Our Reverence of Scripture:

Insofar as I can interpret Rav Shaul’s phrase “all Israel shall be saved” (or, “πᾶς Ἰσραὴλ σωθήσεται”) in Rom 11:26, it includes everyone. The term “πᾶς” may be rendered: “1) individually 1a) each, every, any, all, the whole, everyone, all things, everything 2) collectively”. Hence, “all Israel” seems to refer to each and every individual in the collective of Israel.

And the term “σωθήσεται” may be rendered (from “σῴζω”, verb, {sode’-zo}):
“1) to save, keep safe and sound, to rescue from danger or destruction
1a) one (from injury or peril)
1a1) to save a suffering one (from perishing), i.e. one suffering from disease, to make well, heal, restore to health 1b1) to preserve one who is in danger of destruction, to save or rescue
1b) to save in the technical biblical sense
1b1) negatively:
1b1a) to deliver from the penalties of the Messianic judgment
1b1b) to save from the evils which obstruct the reception of the Messianic deliverance”. 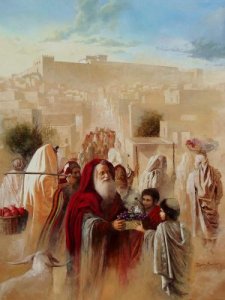 It seems to me to be a consequence of HaShem’s unwavering faithfulness to keep His covenanted promises. Certainly the record of the Tenakh shows that it cannot be the result of 100% faithfulness by 100% of Jews throughout our millennia of history as a people. I can only infer that this was Rav Shaul’s intended meaning, based on his understanding of the prophecies cited (viz: Is.59:20-21; Is.27:9; Jer.31:33-34). None of it appears to be conditioned by the individual or collective state of any Jew, thus one must infer that HaShem has some plan by which to accomplish the redemption of the unworthy Jewish souls who will nonetheless benefit, and none will be left out. Personally, I envision a massive crash-course in Jewish messianism for a whole host of Jews swept up together into a special state outside of the time-stream immediately after their deaths; but, hey, it’s not my job to second-guess HaShem.

This is helpful since my knowledge of ancient Greek is non-existent, and it does establish that there is some justification for my beliefs and my hope that indeed, all Israel, every individual Jewish person, will be redeemed by God, just as He promised.

The promises of God are real and wholly reliable. We just need to make sure our theology and doctrine map to this Biblical truth.