This dialogue can happen over the Internet. God forbid that I should disparage the Internet as a means of communication; the irony would be a bit sickening. But realistically, all the activity out here is nothing – nothing! – compared to what is going on in real churches, with real people talking face to face. Real, honest dialogue with other people who bear God’s image and are trying just as hard as we are to understand and interpret the Bible.

I have seen so much good come out of the church I am in. Depending on how far you want to stretch the idiom, I have seen “the blind see, the lame walk, the lepers are cured, the deaf hear, the dead are raised to life, and the Good News is being preached to the poor.”

-Jacob Fronczak
“Why I Go to Church”
Hope Abbey blog

For God did not appoint us to suffer wrath but to receive salvation through our Lord Jesus Christ. He died for us so that, whether we are awake or asleep, we may live together with him. Therefore encourage one another and build each other up, just as in fact you are doing. –1 Thessalonians 5:9-11 (ESV)

I read Jacob’s latest blog post this morning before I went to work and responded to him that I’d probably have to write a “counter-point” blog from my perspective. I don’t write this to disagree with or to oppose Jacob. In fact, I have the greatest admiration for his writing and the message he has created for today. He’s one of the few people who blog, especially about religion, who consistently presents an attitude that is sane and calm. I always hope that I present myself as sane when I blog, but anyone who has followed my “morning meditations” for any length of time knows that I am not always calm.

Jacob makes some very good points about why a person who is aligned with the “Hebrew Roots” movement can still attend and even thrive in a traditional church setting. I’ve said this in the past and I have also said that a great deal of good is done by the church in pursuing the commandments of Jesus to feed the hungry, visit the sick, and to provide comfort to the widow. In fact, I experience that sort of lovingkindness more from the church and the traditional Jewish synagogue than I do from many of those groups who call themselves “Hebrew Roots” or “Messianic,” usually because those groups are more focused on establishing and maintaining their “rightness” than in actually doing “rightness” to others in the Messiah’s name.

On the other hand, I have reasons for not attending church. None of this is new and I’ve spread “my story” over many different blog posts and various comments in the blagonet, but after reading Jacob’s message this morning, I felt I should collect all of that here today. This also, by coincidence (if I can even believe in coincidence in a created universe), dovetails nicely into today’s morning meditation where I spend several paragraphs summarizing my “witness” or my history in the world of faith.

Up until last May, I was regularly attending and teaching at what you would call a “One Law/Messianic” congregation. I left after much prayer, study, and investigation of the assumptions that had originally attracted me to that movement because of two basic reasons: I no longer felt the One Law proposition, which states that both Jews and non-Jewish Christians are obligated to the full 613 commandment in the Torah (minus Jewish halacha and Talmudic judgments and rulings) was Biblically valid. Also, I didn’t want to worship in a religious venue in which my wife, by her very nature as a (non-Messianic) Jew, would be unable to attend, and which would prevent me, due to my “reputation” as “Messianic,” from fellowship with her communities in Reform and Chabad Judaism.

I kind of miss it.

The idea was to join with my wife at some point, in her communal religious life, but she doesn’t really have one at this point. She very occasionally attends shul, usually for a bar or bat mitzvah, or to help in some event held at one synagogue or the other, but not for Shabbat services and not to go to any of the classes being offered. I’ve suggested that perhaps we could do something together at one of the synagogues, and after a number of conversations on the matter, she said, “we’ll see.”

So why don’t I attend a church in the meantime? One of the reasons I left “One Law” is that the Rabbis at both synagogues in town are generally “OK” with Christians visiting for worship and classes, but they have an extremely difficult time even tolerating the presence of “Messianics”. Certainly, if I attended a church, even regularly, I would be no more or less offensive to them than any other Christian who walked through their doors, and certainly there are other intermarried couples who attend both synagogues, so how out of place could I be? Church attendance shouldn’t be a barrier to synagogue worship as such.

The other reason I left “One Law” was because I didn’t want to worship alone. I don’t mean without fellowship, which I had in abundance, but without my wife. She would no more step one foot inside a church than she would inside a “Messianic” congregation and for pretty much the same reasons. I would be just as “isolated” from my wife in a church service as I ever was in a “Messianic” service. I might eventually gain fellowship with other Christians, but it would still be completely hollow without my wife.

I know what some Christians out there are probably thinking right now.

You could reduce that down to, “the heck with your family, Jesus is more important” or words to that effect. You could even attach my desire to attend synagogue services with my wife to what the Master said in Matthew 10:33 (ESV): but whoever denies me before men, I also will deny before my Father who is in heaven. So much for loving my wife, eh guys? But what about this?

…and said, ‘Therefore a man shall leave his father and his mother and hold fast to his wife, and the two shall become one flesh’? So they are no longer two but one flesh. What therefore God has joined together, let not man separate.” –Matthew 19:5-6 (ESV)

It’s not so easy now to simply dispense with my “other half,” even for the sake of my faith in Jesus, unless you can come up with some handy way to reconcile the dissonance created by juxtaposing those two teachings of the Master (and I’m aware that theology has come up with some rather creative ways of making discordant verses “fit” for the sake of “smoothing over” theology when rationally, they otherwise shouldn’t reconcile).

And then there’s supersessionism in the church.

I recently wrote an article for Messiah Journal called Origins of Supersessionism in the Church, which is the first of a four-part series on this topic. While I generally oppose this theology, my writing and research has made me particularly sensitive to the extraordinary harm this teaching of the church (not teaching of Jesus and Paul) has done to the Jewish people and to the worship of the Messiah within the framework of Judaism over the past 2,000 years or so. I admit to living with a certain amount of apprehension that if I ever started attending a church again, someone, a Pastor or Bible Teacher or just one of the parishioners, would spout off something about the church replacing Jews. Then I’d feel my blood pressure rise along with my temper, and I’d either just walk out, or I tell that person what I thought of their ill-considered “theology” (and then walk out or be thrown out).

Not that it would really be their fault. After all, the church has been teaching supersessionism as Biblical “fact” ever since the days of the early Gentile “church fathers.” That still doesn’t make it right nor does it mean I have to tolerate a way of understanding the New Testament that requires Judaism and every living, breathing Jew (including my wife and three children) to be deleted from religious, spiritual, and historical significance, not to mention permanently removing them from God’s love and, in at least a historical sense, removing the Jews from their very lives.

I told you I was sensitive to this stuff just now.

So that’s why I don’t go to church. 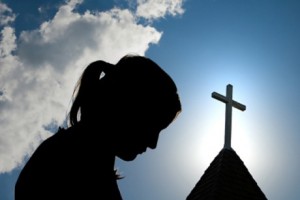 I understand what Jacob is saying and he’s right. Internet relationships are something of an illusion. I have managed to turn one or two into “real” friendships, but it always involves meeting in real life and doing stuff together. Pretty difficult for most web connections, particularly when those contacts span the globe.

Jacob ended his blog post with an invitation to those of us who are disaffected in relation to the Christian church:

If you believe in Jesus, you’re a Christian. We’re all brothers. We can be distinctive without being destructive. We can worship together. We can live together. We have to.

And maybe, just maybe, you could drop in at church sometime. We’d love to have you.

Thanks, Jacob (where ever you live…which according to his About page, is thousands of miles away from me). I’m not sure how that would ever work out, but I guess we’ll see what God has in mind.