Worry is self-humiliation. Trust is dignity.

To worry is to worship the world. To fall on your knees in dread and grovel before it.

To trust is to lift up your eyes and stand as tall as the heavens. To live with nothing else but the bond between G‑d above and you below.

-Rabbi Tzvi Freeman
“Just the Two of You”
Based on letters and talks of the Rebbe, Rabbi M. M. Schneerson
Chabad.org

OK, I need to review my own lessons on trust. Being human, I sometimes forget that reality exists on more than just a human level. As a person of faith, I believe in God, but it takes a person of trust to actually rely on God to do, if not the impossible, then the highly improbable. I speak of the topic I chronicled recently as Vain Hopes.

Yes, it’s no fun when your spouse tells you that the most important single aspect of your existence, your faith, is embarrassing to her, but that’s hardly something I can change. So what’s next?

Understanding. I can’t change who I am (well, I can, but that would involve not being a Christian anymore and I’m not willing to do that), but I can try to better understand who she is. Maybe that will be some comfort.

So who is she? Expanding on the question somewhat, what is being “Jewish?”

In a very real sense, I’m totally unqualified to answer that question since I’m not Jewish. Even if I received documentation tomorrow that proved beyond a shadow of a doubt that my mother was Jewish (which I’m sure would come as a complete shock to her) and that all of her ancestors were Jewish in a long line going back as far as could be recorded, thus establishing that I’m Jewish, it still wouldn’t give me something I would sorely lack: an actual, lived, experiential, Jewish life. So how can I describe something I’m not and that I have no experience in being?

Really, I can’t. You would think Jewish people could, but actually, it’s more complicated than it seems.

I’m just out of college and struggling to forge my identity. I have strong Jewish feelings, but am meeting some really nice non-Jewish women and am having trouble articulating why Judaism is so central to my identity.

Can you tell me why I should hang in there with the Jewish people?

“Why be Jewish?”
Ask the Rabbi
Aish.com

Please click the above link and read the Rabbi’s answer, but personally, I found his response rather disappointing. What the Rabbi outlines as the advantages of Judaism, living a moral life, specific Jewish values, and so on, could as well be applied to just about any person who follows the lessons of what God gave to the world, “a set of ‘instructions for living’ – the Torah.”

However, the answer to another Ask the Rabbi question may prove more illuminating.

To categorize Judaism “only” as a religion is a misunderstanding. The Jewish people are a nation, who share a common land (Israel), a common religion (Judaism) and a common history (dating back to Abraham).

What is amazing is how the Jews have maintained their distinct national identity having been scattered to the four corners of the globe. This achievement was possible only because of our adherence to the Torah, the “constitution” of the Jewish people. The Torah lays out the scope of personal rights and obligations, as well as laws covering lifecycle, business practice, medical ethics, parenting, married life, etc. Observance of the Torah was thus the thread which kept the Jewish people alive, and thriving, in every place and time.

Judaism cannot be classified as a race, because anyone can become a Jew by converting. The convert is considered a Jew in every regard, and his relationship with God is the same level as that of every other Jew. Come to Israel and you will find black Jews, oriental Jews, Indian Jews, etc.

This is what Christianity lacks. We can enter into a covenant relationship with God through Jesus Christ, and draw close to his covenant community Israel, but we don’t become what the Rabbi describes above; a nation, a people, a unified whole that transcends the boundaries of religion, and if you include those few who convert, ethnicity and race.

Well, that’s not quite true. Anyone, regardless of national origin, race, color, ethnicity, gender, or any other attribute, can come to Christ and worship the God of Israel. But we are of the many nations and the Jews, regardless of where they were born, what secular citizenship they may possess, and whether or not they were born of a Jewish mother or converted from the nations, are uniquely of Israel, and though scattered across the planet, form a united nation before God.

As the commentators point out, the phrase “whoever is not here” cannot refer to Israelites alive at the time who happened to be somewhere else. That cannot be since the entire nation was assembled there. It can only mean “generations not yet born.” The covenant bound all Jews from that day to this. As the Talmud says: we are all mushba ve-omed me-har Sinai, foresworn from Sinai (Yoma 73b, Nedarim 8a). By agreeing to be God’s people, subject to God’s laws, our ancestors obligated us.

Hence one of the most fundamental facts about Judaism. Converts excepted, we do not choose to be Jews. We are born as Jews. We become legal adults, subject to the commands and responsible for our actions, at the age of twelve for girls, thirteen for boys. But we are part of the covenant from birth. A bat or bar mitzvah is not a “confirmation.” It involves no voluntary acceptance of Jewish identity. That choice took place more than three thousand years ago when Moses said “It is not with you alone that I am making this sworn covenant, but with … whoever is not here with us today,” meaning all future generations including us.

But how can this be so? Surely a fundamental principle of Judaism is that there is no obligation without consent.

Please read the full commentary by clicking the link above, but the reality of the Jewish people and Judaism, is that it exists and is obligated to God beyond the simple will of the individual. When you are born a Jew, the mitzvot are yours, whether you want them or not. In the best of all possible circumstances, you are taught to live a Jewish life and you learn to love that life as a Jew before the Throne of Hashem. Judaism chooses the Jew, not the other way around (apart from converts).

In Exodus 4:22, God directly refers to Israel as “My child, my firstborn, Israel.” Whoever and whatever we are as Christians, we do not enter into the presence of God except through Israel.

If we consider the Jewish Messiah as the firstborn of Israel, this point becomes even more specific.

Jesus said to him, “I am the way, and the truth, and the life. No one comes to the Father except through me.

The irony for me is that my closest Jewish relative is my wife, and not for a split second would she consider Jesus as the Jewish Messiah, nor see herself and her people as the authors of my salvation through Christ.

More’s the pity, and I pray that it won’t always be that way.

None of this is doing a very good job of defining who a Jew is or what Judaism is, at least down to the finest details. In fact, it gets a little more confusing when you consider the Ask the Rabbi answer to Definition of a Jew:

Torah methodology is universal – for Jews and non-Jews, religious and secular, Israel and the Diaspora, left and right. The Torah is alive and relevant for today. And for the Jewish people, the ability to effectively communicate this message is our single most important undertaking. 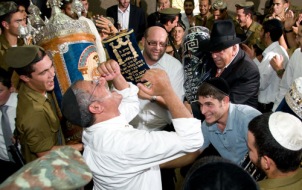 This makes it seem like what the Torah contains, at least at its core, is a set of instructions that applies to all of humanity, not just the Jewish people, but it is the responsibility of the Jews to “effectively communicate this message.” That sounds almost evangelical, until you realize the mission of Judaism isn’t to make the people of the nations into Jews, but to teach them/us about the One true God of Israel. In modern traditional Judaism, that extends no further than the level of the Noahide, but from Christianity’s point of view, we enter a whole new world when we know God by accepting Christ.

Where that world takes us is a journey beyond imagination, and one that is unique, in many ways, to each individual. In some ways, as is in my case, it actually leads somewhat away from its source; away from Judaism, at least at the personal level, since most Jews cannot tolerate a great deal of Christianity in their lives. But while faith is easy, trust comes very hard, especially in the presence of disappointment.

However, as Rabbi Freeman stated at the beginning of this “meditation,” “To trust is to lift up your eyes and stand as tall as the heavens. To live with nothing else but the bond between G‑d above and you below.”

Please forgive me if I take the liberty of applying those words of wisdom to all of us and not just to the Jewish people.

I lift up my eyes to the hills. From where does my help come? My help comes from the Lord, who made heaven and earth.

When you’re in the middle of the journey and it all seems so futile and hopeless, then the path has reached its end, regardless of what actually lies before you. But when there is hope, when you lift your gaze out of the dust and darkness and raise your head up to see the light, the journey begins again as if you had just taken your first step.

13 thoughts on “My Hope Comes From The Lord”