First contact is a term describing the first meeting of two cultures previously unaware of one another. One notable example of first contact is that between the Spanish and the Arawak (and ultimately all of the Americas) in 1492.

Such contact is sometimes described later by one or both groups as a “discovery”, particularly by the more technologically developed society. In addition it is generally the more technologically complex society that is able to travel to a new geographic region to discover and make contact with the generally more isolated, less technologically developed society, leading to this frame of reference. However, some object to the application of such a word to human beings, which is why “first contact” is generally preferred. The use of the term “discovery” tends to occur more in reference to geography than cultures…

It’s both unfair and inaccurate to say that my meeting Saturday morning with Pastor Randy was a “first contact” situation, both because I have previous history in the Christian church and because having lived for fifteen years in Israel, Pastor Randy was more than familiar with anything I had to say about Jews and Judaism. That’s a severe abbreviation of why my nearly two-hour conversation with him wasn’t a “first contact,” and there are a great many reasons why our talk was both informative and illuminating, at least on my side of the equation.

I had a feeling I would be. Not knowing what to expect as I walked into the church’s front door, I am comforted by what actually happened, though it wasn’t quite what I thought it would be.

If I had to sum up my response to my conversation with the Pastor, I’d have to say that I feel “understood” in terms of my concerns regarding my “cultural” re-entry into the church, as well as my personal and family issues associated with being intermarried.

But Pastor Randy also put on the spot a few times, although very gently, and I actually appreciate that he did, since who doesn’t want to be challenged in their (my?) faith community? For instance, something I think I’ve been missing in terms of “hearing” God is that I study the Bible a lot but don’t just read it enough. Does that sound confusing? It did to me, but then I thought about it for awhile and it started to make sense. I tend to read the Bible for the purpose of either studying something or doing research for a blog post, but I never really just immerse myself in scripture for its own sake, and to hear what God is trying to say to me. Maybe I can’t do that anymore without writing about it, but it certainly seems like it could be true. I used to do that; I used to just read the Bible, but somewhere along the way, I set that particular behavior aside, replacing it with studying to achieve some pre-set goal or lesson plan. I suppose it’s the difference between riding a bicycle to commute to and from work, or to lose an extra ten (or twenty, or more) pounds, as opposed to riding a bike along the greenbelt for the pure pleasure of taking in the glory of God’s autumn “artwork.”

I also realized, although Pastor Randy may not have intended to communicate this, that my talking to God “Tevye-like” in a continuing dialog, may have put my relationship with God in an unbalanced state, so to speak. I gave up more formal prayer when I gave up other traditionally “Jewish” religious practices, and I think now that I may have put my siddur away needlessly. No, a Baptist Pastor didn’t actually suggest that I pray from a siddur, but he did say that formal prayer is something that Christians could take as a benefit from Judaism. We don’t get a lot of practice appreciating the immense and august majesty and awe associated with anticipating our twice daily approach to the throne of the King.

I can’t recall everything that was said during our conversation, nor would it be beneficial to try to recount every detail here. I did come away with some realizations, information, and decisions. Here are a few of them. 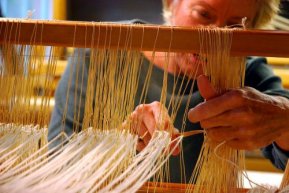 I volunteered to do something for the church. I won’t say what it is right now, but the church’s need came up in conversation and it seemed to “fit” my interests and skill sets.

I seriously renewed my desire to visit Israel, not in just some dim “someday” future, but in less than a year as a potential goal.

I will be going to church and Sunday school tomorrow (this morning, as you read my “meditation”). No one was more surprised by this revelation than I.

I specifically asked about the level of supersessionism at this church, and according to the Pastor, on a scale of zero to one-hundred, it is set at a firm zero.

Given everything that I’ve just written and all that I recall about my conversation with Pastor Randy and its results, how much of all this did can I reasonably believe God arranged to happen?

Not only the pirouettes of a leaf as it falls off a tree, the quivering of a blade of grass in the wind, each and every detail of existence brought into being, given life and directed every moment from Above

Every nuance is an essential component of a grand and G-dly scheme, the gestalt of all those vital minutiae.

Every moment burns with the pulse of G-d’s desire.

Meditate on this. And then think:
How much more so the details of my daily life.

-Rabbi Tzvi Freeman
“Every Detail”
Based on the teachings of the Rebbe, Rabbi M. M. Schneerson
on the central teaching of the Baal Shem Tov
Chabad.org

Will You cause a driven leaf to tremble?

While I sometimes feel as if I am a “driven leaf” trembling before the awesome winds of God’s will, in fact, I also believe that the nuance of “every moment burns with the pulse of G-d’s desire.” I suppose that’s a lot of meaning and expectation to pack into a meeting with one Pastor that lasted just under two hours, but that’s how I’m choosing to interpret it. This “morning meditation” is being written on Saturday and published early Sunday morning so further revelations are unrealized but soon to be experienced.

When my wife came home later in the day, she asked about how my meeting went, which in and of itself, surprised me. I wasn’t sure how “covert” she wanted me to keep this side of my life. I told her some of the things I’ve written above and others that I haven’t. She was a little surprised that there were a couple of people tangentially involved in the church that she knows. I think she’s more comfortable about me attending a church than any sort of “quasi-Jewish worship venue” as I had in the past. I definitely think she’s more comfortable in my attending a church than either of the local synagogues.

At this point, it’s like a new (or renewed) swimmer looking at a swimming pool and considering a return to swimming after an absence of many years. The first question is, where should I dive in; the deep end, the shallow end, or somewhere in the middle? Should I just jump off the side, use the high dive, or slowly walk down the stairs? Who knows? Not being sure of the best course, I’ve selected a likely point of entry and will “get my feet wet” tomorrow (today, as you read this). I’ll make adjustments as I experience the water. I think there’s a wise, though forgetful “sage” who has a relevant piece of advice for this occasion.

9 thoughts on “57 Days: Life is Burning with God’s Desire”