Another church report. I have to admit, this morning (as I write this), I dreaded going to church. I was afraid of what I’d find when I got there. Well, not during services since they’re rather predictable, but Sunday school. But first things first. The sermon was on Acts 8:1-8.

And Saul approved of his execution.

And there arose on that day a great persecution against the church in Jerusalem, and they were all scattered throughout the regions of Judea and Samaria, except the apostles. Devout men buried Stephen and made great lamentation over him. But Saul was ravaging the church, and entering house after house, he dragged off men and women and committed them to prison.

Now those who were scattered went about preaching the word. Philip went down to the city of Samaria and proclaimed to them the Christ. And the crowds with one accord paid attention to what was being said by Philip when they heard him and saw the signs that he did. For unclean spirits, crying out with a loud voice, came out of many who had them, and many who were paralyzed or lame were healed. So there was much joy in that city.

And so begins the great persecution of the church and the spreading of the Good News outside of Jerusalem and Judea to Samaria and eventually to the rest of the world. Pastor used these verses as a platform to encourage his audience (the people in church listening to the sermon) to preach the Good News ourselves in our environment. Since he had previously been a missionary and is the son of missionaries, he also suggested we shouldn’t consider a foreign mission trip outside of the realm of possibility for us.

I found out something interesting, at least I think I did. Pastor made it a point to say that there wasn’t a priority necessarily for the Good News to first be preached in Jerusalem, then in Judea, then in Samaria, and then in the diaspora, but rather those who were scattered preached the Gospel wherever they went. I guess a lot of Christians look at this passage and figure that you are first to preach the Gospel in your own community, which somehow translates into having no desire to go to foreign places and do God’s work there. Pastor emphasized that there are many spiritual problems in the U.S. and a great need for the Word to be spread here, but we have lots and lots of churches. There are places where there is no access to the Word of God whatsoever and those are the places that need evangelists and missionaries.

Listening to Pastor, I realized that I didn’t know how some Christians looked at the Bible at all and what they thought it was supposed to be telling them. I had no idea that this part of Acts could be interpreted relative to whether or not it encourages Christians to do missionary work.

Of course, I also encountered a significant bias toward missionary work in foreign lands, both in terms of preaching the Word and helping with physical needs, but I don’t think there’s anything wrong with that. It’s just the emphasis of the Pastor and of the church (they use a significant portion of their resources to support missionaries).

The theme continued in Sunday school. A couple who were visiting the class had spent decades as missionaries in the Congo. Interestingly, the wife had grown up there (her parents were also missionaries) and her husband had spent the last 25 years or so with her in the Congo. They told us that whatever we do or don’t see on the news isn’t like what is actually happening. Another fellow, who had just returned from Turkey (not as a missionary..his job just takes him there) said he had met a “war photographer” on the return flight who showed him his work. The photographer said that 95% of this photos would never make it into the media because Americans don’t want to know what’s really happening in the world (I tend to believe that’s the perception of a censored and biased press, but he’s probably right). There’s a lot of persecution of Christian missionaries in Muslim countries that the Western press never, ever talks about, even though there’s amble information and evidence, such as the photos in that war photographer’s camera.

I was listening to all of this as an outside observer. I really didn’t have anything to contribute to the conversation and at those moments when I was tempted, I wrote in my notes “bite your tongue.” I know that missionaries living and working in the “foreign mission field” really do live in a different world from mine, but just being in that class felt like a different world too. I was sitting in class reflecting on my experience of being at church and realized that people were starting to get used to me being around. I knew that when I realized that fewer people were greeting me. A few people said “hi” but it wasn’t with the same frequency and intensity. I guess they’re probably saying, “the ball is in your court.” In other words, what am I going to do to become a member of this community?

I have no idea.

As I was going out the door to go to church, my wife said, “Have fun.” I wasn’t anticipating having fun and when she asked me why I was going, I blurted out something about a sense of obligation…that I had a responsibility to be “in community.” I go to church because I feel obligated to go, not because I get a lot of “pizzazz” out of it. I suppose I shouldn’t expect a lot of pizzazz. I managed to get through singing the Christmas hymns and listened to Pastor’s sermon which often is the highlight of my church experience. What’s “fun” or “pizzazz” got to do with it?

Charlie, the leader of the class I attend, announced that he would be leaving class at the end of December. I guess he doesn’t feel well, but I’d have to be able to read between the lines to understand more. He asked for people to volunteer to take over leading the class and if no one did, the class would disband. So one of my very tenuous holds in church, this class, is probably going “bye-bye.” There are a number of other adult classes being offered so I suppose I could attend one of them, but do I want to and what would be the point?

A Russian congregation had been using the church building for their services on Sunday afternoons but Charlie mentioned that they had disbanded last week. There are about thirty or so Russian-type congregations in the Boise area and I used to know some of the folks involved (they occasionally attended the One Law group where I used to worship). Charlie mentioned that whatever bond had held the Russians together (and they had been persecuted for their faith in their own land) had dissolved and it made me realize that “bonding” to the people at this church is a real struggle. In listening to different people in the class talk, I found out that many of these people had known each other for decades, sometimes back into childhood, and that many had an unbroken Christian faith also going back that far.

That’s one of the reasons I’ve found it difficult to “bond” with religious people in general…my being a “Johnny-come-lately” as far as my faith. In some ways, sitting there in that Sunday school class, I felt like I had just become a Christian and outside of that knowledge, was completely disconnected from whatever else it means to be a Christian. I also discovered that those people feel disconnected and isolated too, but in this case, it’s because of “rampant sin in the world” that the world “dresses up” sin to look acceptable, and the world wants the rest of us to accept it, too (they were probably talking about recent changes in the laws in some states allowing gay marriages).

A life of faith is isolating and in visiting this church it’s like I’m an island visiting a somewhat larger island. While I feel I’ve reasonably resolved my personal uncertainty about remaining online, at least here in the blogosphere, remaining at church past my deadline is still a big, fat question mark. The people and groups in the church who feel alienated from the larger culture have each other in their community, but I’m a stranger in their very strange land. You can’t get to know people at church between the service, the singing, the prayers, the sermon, the Sunday school class discussion, but I don’t know how to form connections to take it to a more meaningful level. 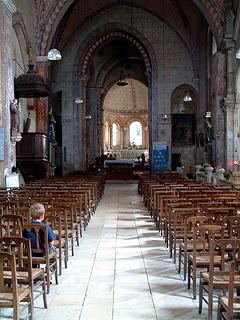 It wouldn’t be any different in other church and it wouldn’t be any different in a synagogue or other social setting. When my wife and I first started a church experience many years ago, we already knew some of the other families attending, so we had a way “in.” I don’t know how to do that here and I don’t know that I should. On the other hand, I’m afraid of simply giving up too soon, especially if (and I know this will sound “churchy”) God has some sort of plan for me to continue here.

I feel like a person who has been handed an anonymous note telling him to enter a room and introduce himself to the stranger he discovers inside. There’s no context, no reason, no apparent purpose to the encounter and only a minimal and mysterious set of instructions that act as guide.

Will there be church after the next three weeks? I don’t know. If there is, then I can’t imagine what I’ll be doing there. If it’s where God wants me to be, then I guess I’ll go to services, go to Sunday school, and remain a tiny island visiting a larger island for about three hours every Sunday. I’ll follow the instructions on the note, enter the room, introduce myself to the person I find inside, and then we can both wonder what we’re supposed to do next.

Reality Check: After writing all of the above, I had coffee on Sunday afternoon with a friend who has been at his current church for four years. He’s been a believer for most of his life (we’re about the same age) and he’s been through many different churches and movements over the course of a life of faith. He told me it will take at least a year for me to feel any sort of integration into church at all. A year?

2 thoughts on “21 Days: An Island Within an Island”