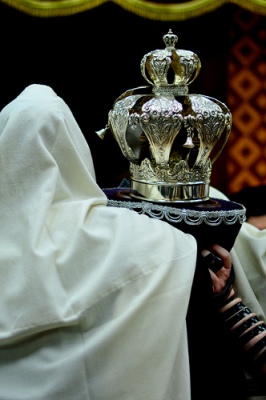 The campaign of the Greeks was aimed to “make them forget Your Torah and violate the decrees of Your will” (Sidur p. 59); as the Midrash (Bereishit Raba 16) puts it, (the Greeks demanded) “Write…that you have no share in the G-d of Israel.” It was a war against G-d. “Let them study Torah,” the Greeks implied. “Let them practice the justice-mitzvot and the ‘testimonial’ observances. But they must not mention that the Torah is G-d’s Torah and the mitzvot are the decrees of His will. Torah and mitzvot must be severed from G-dliness.”

I think it should be consistent either way, don’t you? Either the church gets all the credit or none of it. You can’t just give it the good and ignore the bad.

This gets muddied up further when definitions about what “right” happens to be differ between religious and non-religious populations and certain social priorities and “causes” become involved. Then too, the matter of the “supernatural” vs. the “rational” is also injected into the argument, with rational, scientific atheism and secular humanism weighing in on the side of “thinking” as opposed to “believing”.

In doing a little research into “atheist advertising” for this blog post, I found a number of clever slogans that atheists use to promote their particular viewpoint. One was on the side of a New York City bus and read…

The ad then provided the URL to the New York City Atheists website (see the story at The New York Times for details).

But that takes us back to the “Today’s Day” quote at the top of this blog post and interestingly enough, Chanukah.

As you’re reading this, Chanukah has just ended (at sundown Sunday night) but the lessons it teaches us are still fresh in my mind. Why would the Greeks be content to continue to allow the Jews to perform the Torah mitzvot and to do justice, as long as they divorced those moral and ethical deeds and the Torah itself from the God of Israel? If you donate food to your local food bank because you believe that helping others is the right thing to do, and I perform the same act in response to the will of God, what difference does it make? Hungry people are still fed either way, right?

Well yes, hungry people are still fed either way. Someone can enjoy a donated meal without wondering about the motivation of the person who provided it. Their belly will be just as full and they can feel just as grateful to the person who helped them out. I can understand why an atheist would make such a statement, but why would the ancient Greeks, who had no end of gods of their own, want to say something like that about the Jews? Why separate the good deed from the ultimate author of the good deed, God?

Pinchas arose and wrought judgment, and so the plague was checked.

The word tefillah, or “prayer,” has its origin in the word pallel, which means “to seek justice.” Prayer should therefore be an activity whereby one seeks justice. The first recorded prayer in Jewish history is that of the Patriarch Abraham. He sought justice for the people of Sodom and pleaded with God to spare them (Genesis 18:23-33). Thus, when we pray, whether for ourselves or for others, it should be with the understanding that we are seeking justice.

How, then, can we ask of God to grant our various requests? Are we deserving of this? Do we deserve them? Are they within the realm of justice?

Two answers come to mind. If, as part of our prayers, we admit the wrongs we have done, sincerely regret them, and commit ourselves not to repeat them, then we may indeed be deserving. We therefore do not make our requests on the basis of what we are, but on the basis of what we will be. Second, if we extend ourselves by forgiving people who have offended us and acting with kindness toward them, then God’s acting accordingly toward us can in itself be considered justice.

Thus, teshuvah (the process of regret and return) and gemilas chasadim (acts of kindness) are the foundations of prayer.

I don’t have some wise commentary or a learned sage to draw from to answer the question I posed above, but there seems to be one difference between the atheist’s motivations and the reason a person of faith does good: the definer and creator of good.

If man is the final arbitrator of what is good and evil, then good and evil changes over time, changes between nations and cultures, and changes from one individual to the next. What I may consider good, another person may see as evil. What I can justify within my own conscience may be considered tremendously heinous within another’s moral structure.

And what is good?

And Jesus said to him, “Why do you call me good? No one is good except God alone.”

OK, it’s not that simple. I’ve mentioned before that religion and how we understand God evolves over time. Besides that, even just within Christianity, various denominations and even individuals who go to the same church can differ on a number of political and social issues in terms of what is “good” and “evil.” Should you pray for the well-being of President Obama or pray against his health and safety? You may believe the answer to that question is clear, but I promise you that no matter what your answer may be, there is a believer out there who has the opposite answer, and yet both of you believe you are in the right because of God and the Bible.

But even though we have that monkey wrench in the machine, I still believe it is better to seek out God in matters of right and wrong than to universally rely on our own judgment and feelings. I’ve been writing recently about the Sandy Hook school shootings and it is only the most recent of the many debates you will find on how to address violence in our society. What is the right thing to do? What is the ethical and moral thing to do in response to the death of 26 people, including 20 small children? 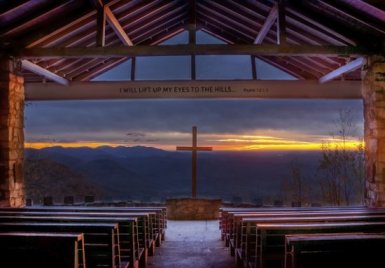 I do know that even those of us who turn to the God of the Bible for our strength and our hope don’t always agree on the answer. How much more must a secular world with only the standard of public opinion dispute each other, disagree, and contend?

I don’t know the answer. But I am thankful that when I have to ask the question, I don’t have to ask another human being who is just as hurt, sorrowful, and angry as I am.

If my sense of right and wrong became detached from God, even if my basic behavior and my concept of what is good did not change, I would be at the mercy of the opinion of whatever group of people I chose to listen to or worse, I would have to depend upon the voice of my own personal thoughts and feelings.

I lift up my eyes to the hills. From where does my help come? My help comes from the Lord, who made heaven and earth.

It was God who took a family and made them a people and a nation too numerous to count. If the Greeks had succeeded and caused the Jews to detach the Torah from God, Israel too would become detached and ultimately lost. It is God who redeems the soul of every living person and from whose hand we receive what each of us needs at its proper time. Without God, we too would be lost.

5 thoughts on “Separating Good from God”