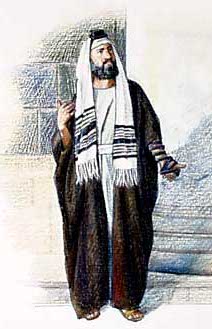 Now when Paul perceived that one part were Sadducees and the other Pharisees, he cried out in the council, “Brothers, I am a Pharisee, a son of Pharisees.

Paul used the present tense, “I am a Pharisee,” not “I was a Pharisee.” Christian commentaries are uncomfortable with the statement, and they usually try to dodge the implications by explaining that he used to be a Pharisee prior to becoming a Christian.

Did Paul perjure himself before the Sanhedrin (a grave sin) by saying, “I am a Pharisee” instead of saying, “I was a Pharisee”? If so, none of his accusers had the wherewithal to challenge him on it. If he was no longer a Pharisee at the time of the trial, his testimony would be easy enough to discredit.

I suppose you could say this is a continuation of my previous “meditation,” Paul the Apostle, Liar, and Hypocrite and earlier commentaries. As I continue to read through Lancaster’s “Chronicles of the Apostles” Torah Club study, I continue to follow Paul through his various “legal problems” and his journey that will eventually lead to Rome, Caesar, and death. I also continue to watch as Paul repeatedly defends himself against the charges brought against him by the Jewish authorities of the Sanhedrin. From Paul’s point of view, he did nothing wrong to the Jewish people, to the Torah, to the Temple, or even to Rome.

In verse 7 of the same chapter, Luke records that “…the Jews who had come down from Jerusalem stood around him, bringing many serious charges against him that they could not prove.”

As we’ve seen in earlier chapters of Acts and in my earlier commentaries on those chapters (thanks to Lancaster and the Torah Club), there simply was no evidence to support the wild accusations that had been made against Paul. He should have been set free, and except for various political reasons, finally including Paul’s appeal to Caesar and Rome, he never was.

Not only do I want to pursue the scriptures and commentaries that support Paul’s innocence, but I want to continue to illustrate how Paul never imagined that being an apostle of Jesus required in any sense, surrendering observance of the Torah mitzvot and the lifestyle of a Jewish Pharisee, nor did he expect this of other believing Jews.

All believers could claim to adhere to Pharisaic doctrine, but not all of them could claim to actually be Pharisees. Paul concluded his testimony with the declaration, “Brethren, I am a Pharisee, a son of Pharisees; I am on trial for the hope and resurrection of the dead!” (Acts 23:6).

That statement might come as a shock to you if you’ve been taught that all Pharisees were horrible, legalistic monsters and hypocrites. After all, Jesus had some pretty rough things to say to the Pharisees.

On the other hand, Jesus also said this:

The scribes and the Pharisees sit on Moses’ seat, so do and observe whatever they tell you, but not the works they do.

Do what they say but not what they do. What do they say?

For Paul, the Pharisaic belief in the resurrection of the dead and a life in the world to come was lived out by his faith in Yeshua (Jesus) as the risen Messiah King.

That is why his faith was “counted to him as righteousness.” But the words “it was counted to him” were not written for his sake alone, but for ours also. It will be counted to us who believe in him who raised from the dead Jesus our Lord, who was delivered up for our trespasses and raised for our justification.

The doctrine of “the Way” was generally Pharisaic and in believing in the resurrection, so is modern Christianity.

I know, that’s probably a stretch for most of you, but if you follow the logic of Paul’s defense as recorded by Luke, it is very compelling. Lancaster comments further on this point.

The teaching and beliefs of Yeshua, Paul, and all the apostles echo the theology of the Pharisees. A Pharisee could become a disciple of Yeshua and still be a Pharisee…

Not so the Sadducees or any other branch of Judaism that did not believe in resurrection.

Even though the Master sometimes disagreed with the specific priorities of the oral law, He and the apostles practiced and transmitted Pharisaic, rabbinic tradition and interpretation. Their teachings and methods of biblical exegesis mirror those of the Pharisees. The Sadducees, on the other hand, were the first-century equivalents of Karaite Jews and sola-scriptura Protestants. They rejected most Jewish tradition, oral law, and rabbinic exegesis.

From a modern Christian’s point of view, we almost want to make the Sadducees the heroes of the story because they rejected Jewish oral law and traditions, and Jesus heavily criticized the Pharisees for some of their traditions. But while many of the Pharisees far exceeded the Torah’s intent by creating enormous burdens from their rulings that weighed heavily on the Jewish people, Jesus did not criticize their core teachings. Being a Pharisee wasn’t the problem. Being a hypocrite and a liar was. Paul was the former but never the latter.

But Paul had a “confession” to make.

But this I confess to you, that according to the Way, which they call a sect, I worship the God of our fathers, believing everything laid down by the Law and written in the Prophets, having a hope in God, which these men themselves accept, that there will be a resurrection of both the just and the unjust. So I always take pains to have a clear conscience toward both God and man.

Paul admitted to the charge of belonging “to the sect of the Nazarenes,” but he rejected any implication that the teachings of the Way deviated from normative Jewish expression. To Paul, faith in Yeshua was not simply one more sect of Judaism, it was “the Way of the LORD,” a spiritual restoration and redemption of all Israel that transcended sectarian divides. He admitted to “believing everything that is in accordance with the Torah and that is written in the Prophets.” He declared his hope in God, a hope which his accusers also cherished.

There’s one sentence in my last quote from Lancaster that I hope you caught. Here is is again:

To Paul, faith in Yeshua was not simply one more sect of Judaism, it was “the Way of the LORD,” a spiritual restoration and redemption of all Israel that transcended sectarian divides.

This is as true today as it was the moment Paul said it. Faith in Yeshua the Messianic King is not just a way for the world to be saved (which, of course, is no small thing) but it is the way to spiritual restoration and redemption of all Israel. That is the critical piece of knowledge both Jews and Christians must understand. Jesus doesn’t stand in opposition to the Jewish people, he stands for their redemption as a people and their restoration as a nation.

The good news of forgiveness from sins, salvation, and a life in the world to come is what we focus on as Christians, but most of the time, we miss why Jesus is uniquely special to the Jewish people. He doesn’t just save the individual Jewish soul as he does the individual Gentile soul, he saves Israel, he restores their nation to the head of all nations, he gathers his people back to him and to their Land, and he is their King, the King of the Jews, even as he is also the King of the World.

Paul, the “Christian” Pharisee knew all that, and the evidence of his innocence is also a shining lamp for every Jew and Gentile who turns away from darkness and to the light. To turn toward the light, we Gentiles must surrender a life of disobedience and learn to love, listen, and obey God. For a Jew to turn toward the light of the world in Messiah, they also must learn to obey, but Torah observance for the Jew is part of that obedience. We in the church are obedient, not only when we refrain from sin, but when we act to encourage our Jewish brothers and sisters in the faith to continue to live wholly Jewish lives in accordance with the commandments.

Paul lived his life enthusiastically as a disciple of Jesus Christ…and as a Pharisee.

16 thoughts on “Paul the Christian Pharisee”