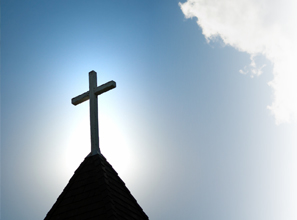 I went back to church today after a three-week absence. I’ll admit that I was avoiding Christmas. I’m OK with people in the general public wishing me a “Merry Christmas” but knowing the additional meaning those two words carry in Christianity, I thought it best to keep a low profile. No one mentioned my not being around and they probably just assumed I was spending the holidays out-of-town with relatives.

God reminded me that He is still in church today. No, I didn’t have a vision or hear a loud, booming voice or anything like that. Three things happened.

The first was a missionary to Ireland (I never heard of such a thing before) who was diagnosed with cancer back in August while serving on his mission, was in our church with his wife today (they attended our church until leaving for Ireland on their mission in 2005). He still walks with a limp and a cane, but the tumor was removed from the bone in his leg and the radiation treatments are done, so he’s finally beginning to heal and go into physical therapy.

I was surprised how young Dean (the missionary) was. Not a grey hair in his head. For some reason, I expected him to be older. He also was very gracious about having cancer. He said it opened up opportunities while in Ireland once word got around. People approached him with their own physical or medical difficulties or crises in relation to faith and their spiritual lives. Sure, maybe between him, his wife, and God, Dean had a lot of hurt and angry things to say, but you’d never know it by listening to him in church this Sunday.

The second thing that happened was Pastor Dave leading prayer. No, that’s not unusual of course, but he’s going in for some surgery tomorrow (three people in church are all having surgery on Monday). Dave is also a young guy, in his 40s but he looks younger to me (I guess that doesn’t hurt when you’re the youth Pastor). I didn’t write down the prayer and I don’t remember the words, but the “feeling” of graciousness is what sticks with me. I know that some people in Hebrew Roots and related movements have left “the Church” because of some harm (real or perceived) they endured at the hands of Christians, but even though I don’t always agree with the standard theology and doctrine, I will never criticize the people I worshiped with today for a lack of compassion and love of God and each other.

The third thing that happened was during the music. Pastor Bill (who is an older gentleman) sometimes leads the singing when the usual people who are more “officially” musical are unavailable. There are hymn books, but most people use the projection of the lyrics on the screen at the front of the room. At one point early in the first hymn, Pastor Bill stopped the singing. There was a lyric about surrendering everything to Jesus. He pointed out that it doesn’t mean just “Sundays” or just a few things, but everything. I wonder how many of us really, really have surrendered everything? I know I have a long way to go in working through my imperfections as a human being who purports to be a disciple of Messiah.

God was in church today.

True, I felt a few disturbing tremors in Pastor Randy’s sermon, reminding me that he still reads my blog (though I could be reading too much between the lines of his message) and doesn’t always agree with my opinions, but his grasp of history related to scripture always opens up new worlds in the Bible for me. It’s also true that when I got to the Sunday school class, it was uncharacteristically dark, with no indication that the teacher or anyone else had set the room up for us. Since we have a “guest missionary” with us today, and since plans change at church quickly sometimes, I figured we weren’t having class after all, so I turned around and headed on home. I was disappointed, but things happen.

Pastor Randy’s been out-of-town for a few weeks for a family reunion, and I just found out that he’s going to be gone in relation to his doctorate program for most of January, so I guess our conversations are on an extended hiatus. Another disappointment.

But God was in church today, so that makes up for those few things that didn’t quite work out.

I’ve been struggling with church for a while now and being out for three weeks only made it that much more difficult to go back today. But instead of focusing on the differences I experience between my viewpoint and the “official story” of doctrine and dogma, I need to look at what we all have in common and what I am learning about God, the Bible, and myself.

God was in church today. Maybe He’ll be there next Sunday, too.

4 thoughts on “God Was In Church Today”