We’ve explained why midrash and aggadah are so vital to our Torah diet. We’ve explained that these stories speak to us from a higher plane of reality. And we’ve also demonstrated that even if you don’t get it, you still do get it—meaning that you’ve still got truth even if you’re clueless to the meaning inside.

We’ve also provided some guidelines to determine whether a story is an anecdote or a parable. Now, let’s take a test case. Let’s look at a story of the Talmud and see what’s meant literally, what’s meant to point to something deeper, and how it could be true for everyone on their level.

-Tzvi Freeman and Yehuda Shurpin
Death by Secrets
Part 5 of “Is Midrash For Real?”
Chabad.org

That’s a really nice summary of the past four articles compressed into just a couple of paragraphs. Now’s the test. Run an actual story through the matrix and see if it makes sense. This last commentary by R. Freeman and R. Shurpin is quite a bit shorter than their previous missives. I could probably copy and paste the whole thing here and then comment on it, but I don’t think I’ll do that. You have the link above to see all of the contents.

So what’s the story they want to test?

Rabbah taught, “A man is obligated to get drunk on Purim until he cannot distinguish between ‘cursed is Haman’ and ‘blessed is Mordechai.’”

I’ve heard this one before. This story circulates every Purim (and as I write this, it is still before Purim). The commentary from Chabad tells us something useful right away.

In this case, I guarantee this is not meant to be taken at face value.

In other words, even if these two esteemed Ravs got drunk on Purim, it wasn’t to the degree that Rabbah murdered and then resurrected Rabbi Zeira. But then what does it mean and more importantly, how does this story ”speak to us from a higher plane of reality?”

Here’s where the title “Death by Secrets” comes in.

What we appear to be dealing with in this case is a real-life anecdote told in figurative terms. Rabbah and Rabbi Zeira were drunk, but not from the wine; and Rabbah slaughtered Rabbi Zeira, but not with a slaughtering knife. Everything was good, very good—to the point that Rabbah was ready to go it again. Just not something that us amateurs should attempt without clinical supervision.

What? OK, I was fine with ”a real-life anecdote told in figurative terms,” but what does it mean that Rabbi Zeira was “slaughtered but not with a knife” and “everything was very good and Rabbah was ready to go again?” Go at what?

”When wine enters,” the Talmud tells us, “secrets come out.” Rabbi Isaiah Horowitz, in his classic Shnei Luchot ha-Brit, describes how great sages and holy men would consume much wine and celebrate—and the channels of their mind would open so that the deepest secrets of the Torah would flow out of their mouths.

Interrupting the narrative for a moment. Sounds like something Carlos Castaneda was trying to do; apprehend Yaqui Indian sorcery through the use of mind-altering drugs. But to continue…

He cites stories of the Talmud to this effect. Rabbi Chaim ibn Attar, in his commentary to the Torah, Ohr ha-Chaim, describes how it was these secrets that emerged through the drinking of wine that carried Nadav and Avihu, the two sons of Aaron, to death as their souls departed from their bodies in ecstatic divine love.

Now, Rabbah was able to imbibe these secrets and remain alive, as his name implies: rab means “great.” But Rabbi Zeira could not contain such intense light: ze’ir means “small.” So Rabbah’s sharing of mystical secrets created such a great thirst for divine union in Rabbi Zeira’s soul that it departed, and his body was left dead.  The next day is no longer Purim—no longer a day for escaping all bounds and limitations, but a day for fulfilling your purpose down here on earth inside a physical body—so Rabbah dutifully resurrects his colleague.

The next year, Rabbah had no regrets, and was ready to perform the same clinical procedure on Rabbi Zeira once again—take him for a ride up to heaven and back again the next morning. Or perhaps he figured Rabbi Zeira had enough time to also attain a higher level, and would be able to hang in there.

So we aren’t to believe that Rabbah literally murdered Rabbi Zeira but we are expected to believe that under the influence of alcohol, Rabbah’s “secrets” were spilled out, and he took Rabbi Zeira on an unexpected ride to heaven and then back to earth the next day.

Rabbi Zeira decided he didn’t want a second trip to heaven the following year, not because it would drive him to the point of insanity and even kill him, but because of his great humility.

But then Freeman and Shurpin give a more down-to-earth answer:

Whatever the case, the lesson remains the same: Don’t get carried away with your wine, no matter its substance. Keep your feet on the ground. If you know you’re the type to be easily carried away when drinking, avoid it altogether. 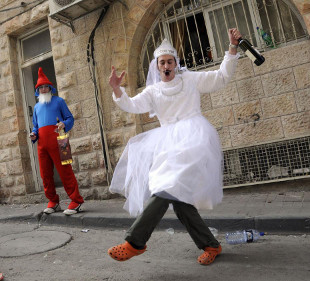 So it all depends on what kind of person you become when you get drunk. That’s the moral of the story and it seems to be the most useful lesson being taught, especially when imbibing at a celebration where others are present.

To be honest, I’m a little disappointed. That’s quite a build up to a conclusion that seems so pedestrian. I mentioned in last week’s review that based on Yann Martel’s novel Life of Pi, it’s not the more believable story that’s “real” but the most interesting tale.

Here we have three selections:

The moral of all three stories is, if you know you get too excited or carried away while drunk, avoid social situations that require alcohol consumption.

As far as which story you want to apply to the moral, I guess it depends on which one you find the most interesting or, if “interesting” isn’t what you want from your morality tales, which one seems the most plausible.

I learned what I already knew, to take mystic and midrashic tales with a grain of salt. Don’t get me wrong. I love a good metaphor and a fantastic saga. I believe they can contain great truths about the reality of our lives. I just don’t think that contained within these stories are a higher mystic reality and must be objectively real. I don’t believe Rabbi killed Rabbi Zeirg with a knife because they were exceedingly drunk and then resurrected him the next day. Nor do I believe that under the influence of wine, the two of them took a trip to heaven in massive, mind-blowing joy and then returns the next day, anymore than I believe that any of Carlos Castenada’s adventures under the influence of hallucinogens were anymore than what a person experiences in a chemically induced, mind-altering state.

I’m sorry, I just don’t. I believe that, however these tales came about, they result in lessons of ethical and moral behavior that are designed to illuminate the communities in which the revered Talmudic sages resided. I wish I could say they were more than that. I really do like reading them and I do learn from each one. I guess I make a pretty lousy Jewish mystic. However, if you’re interested in reading more examples of Chasidic Tales, go to the Chabad webpage Stories from the Midrash.

5 thoughts on “Reviewing the Meaning of Midrash: Part 5”