It can take a long time until something is invented. But once one person has already broken through the creative barrier, others can easily follow suit and produce the same results. For example, it took many years until someone invented the first railroad train. But after one person invented it, many others built similar railroad trains. It doesn’t take a genius to model the work of a genius!

The same principle applies to spiritual growth. There were people in previous generations who reached great heights. They were innovators in the field of Jewish metaphysics. Since we now have them as models, the knowledge of how to reach spiritual greatness is available to all of us.

Today, think of five great people you have met or read about. What qualities do you most respect in each one? As you reflect on these qualities, consider how you would apply these same attributes to yourself.

If it’s true, I can understand why.

I’ve heard it said that when a Jew makes aliyah and returns home to the Holy Land, they do one of two things: either increase their level of religious observance or become totally non-observant. There’s a single reason for both.

In Israel, a Jew has nothing to prove. They are Jewish. Israel is the Jewish homeland. End of story.

Except perhaps for Messianic Jews. I’m just supposing, since I’ve never been to Israel and I’ve never been to a Messianic synagogue in the Land, but if a Jew ever needs to prove he or she is an observant Jew in Israel, it’s when they are also a disciple of Yeshua (Jesus).

For thousands of years, any Jew who has been such a disciple has voluntarily converted to Christianity or been forcibly coerced into doing so. Though one process or another, they surrendered their Jewish practices and their Jewish identity and effectively became, at best, a “Hebrew Christian,” and at worst, a “Goyishe Christian”. 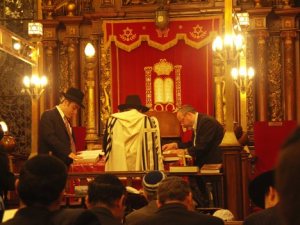 While there have been other Jews who have remained observant and become Yeshua-disciples historically, the weight of the Church’s requirement (demand) for Jews to abandon their covenant relationship with God so they can accept the grace of Jesus Christ is heavy on their shoulders.

Association with (Gentile) Christians in Messianic synagogues could easily be seen as compromising the Jewish identity and affiliations for Messianic Jews in Israel.

Like I said, this is based on a number of assumptions on my part and I’m sure PL or someone else can correct the mistakes I’m most likely making.

But particularly in Israel and certainly every place else, if non-Jewish disciples with a Messianic Jewish “leaning” can’t depend upon any sort of Jewish role model in order to understand ourselves (which I suppose could be rather “crazy-making” since, for a multitude of reasons, you can’t mix the two identities), where do we go?

Rabbi Pliskin no doubt was writing to a Jewish audience in the above quoted “Daily Lift” but he makes a suggestion I think we can all use.

Today, think of five great people you have met or read about. What qualities do you most respect in each one? As you reflect on these qualities, consider how you would apply these same attributes to yourself.

Think of five spiritually elevated people, five tzadikim, Jewish or Gentile. Consider what qualities they possess(ed) that you admire. Then incorporate those qualities over time into yourself.

I know what you’re thinking…well, a few of you, anyway. You’re thinking “I want to imitate Jesus.” That’s fine and well. No better role model available. But then, what attributes or qualities about the Master do you want to emulate?

Yes, Yeshua donned tzitzit and laid tefillin but he was and is Jewish, so unless you’re a Jew (and if you are, you already have a set of traditions available to you that define the mitzvot for observant Jews), let’s just set those behaviors aside for now.

What about Yeshua’s kindness, his compassion for others, his wisdom, his sense of justice, his expression of duty and servitude to his followers, and even to strangers?

Those are all fine qualities to imitate, and you don’t even have to be Jewish to incorporate them into your own behavior. 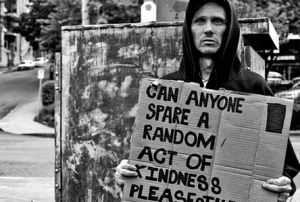 Like Yeshua, you can give to charity. You can pray. You can “preach the Word”. You can urge others to repentance. You can look forward to the coming of the Kingdom and teach others to do the same.

There’s a lot you can do to imitate the Master. He gave plenty of examples that are accessible to any one of us right now.

Of course, you don’t have to limit yourself to Yeshua or even anyone you know about from the Bible. Pick anyone you can think of who you consider spiritually great, figure out why they had such greatness, choose some qualities they displayed, and then learn to integrate them into your own life.

Above, I said it seems simple enough, but it really isn’t. It’s not simple or easy at all.

In fact, it will take a lot of hard work.

But that’s OK because you’ve got the rest of your life to work on improving yourself. So do I.

There’s a blues chart I heard the other day called “I’m Amazing” by Keb’ Mo’. I inserted a link to a YouTube video of his performance in one of my comments on a previous meditation, but I’m sure it’s going to get lost there.

So I’m posting it at the bottom of this blog post where it won’t get lost, at least not as easily. I think my way of lifting up our spirits where many of my blog posts lately have been bringing them down.

If you are (or I am) not sure where to go in your walk of faith and your life of devotion to God, and especially if you’re frustrated because that walk cannot be defined as “Jewish,” it doesn’t mean there aren’t Biblical and other holy examples available to you. I just outlined how you can imitate the most important and holy Jew who ever lived and who still lives, Yeshua, and you don’t even have to be Jewish (or Torah-compliant, Torah-observant, Torah-submissive, or whatever) to do it.