Two millennia ago, the block served as one of several Do Not Enter signs in the Second Temple in Jerusalem, delineating a section of the 37-acre complex which was off-limits for the ritually impure — Jews and non-Jews alike. Written in Greek (no Latin versions have survived), they warned: “No foreigner may enter within the balustrade around the sanctuary and the enclosure. Whoever is caught, on himself shall he put blame for the death which will ensue.”

I found a link to this article on Facebook and it’s really very interesting. It suggests that Gentiles may have had more access to the Herodian Temple in Jerusalem than was previously believed. I’ll let the article speak for itself, quoting what I think are the most relevant sections, and I encourage you to click the link I provided above and read the entire story yourself.

Contrary to the recent New York Times report, which stated that Herod’s Temple was “surrounded by partition walls that were meant to separate gentiles and Jews,” the warning was meant to protect “not the whole Temple Mount, but the inner sanctuary, the inner courtyard,” Price said. The modern notion “that the entire area is somehow holy is contrary to the original purpose and status of this huge plaza of the Temple Mount.”

Gentiles were not only welcome to ascend the Temple Mount, they were also permitted, if not encouraged, to donate animals for sacrifice. Josephus recounts how Marcus Agrippa, Emperor Augustus’s right hand man, visited Jerusalem shortly after the Temple was built and offered up a hecatomb — 100 bulls — as a sacrifice on the altar. Likewise daily sacrifices paid for by the Roman state were offered up for the welfare of the emperors. Philo records in his Embassy to Gaius that on no fewer than three occasions “we did sacrifice, and we offered up entire hecatombs, the blood of which we poured in a libation upon the altar, and the flesh we did not carry to our homes to make a feast and banquet upon it, as it is the custom of some people to do, but we committed the victims entire to the sacred flame as a burnt offering.”

The article states that Herod may have engineered a more lenient policy about Gentile access to the Temple, with only most holy areas being forbidden, not just to non-Jews but to any Jew not ritually clean.

“It was not ethnic or race as much as [ritual] purity,” Price said. “Jews who were not purified or ritually impure could not pass the soreg either.” Unlike gentiles from across the Roman Empire, Jews were expected to know better than to enter the holy sanctum when impure.

Herod changed that. He wanted to exhibit the grandeur of his compound, the largest temple in the ancient world, but not enrage his Jewish subjects.

“The exclusion of the gentiles, according to the inscription, is a kind of compromise between allowing them into the Temple but still excluding them from the inner temple, which is the properly holy ground,” Orian said.

“Reality necessitates compromise in different aspects of Jewish law,” he said. But “even if they were not viewed as impure, they would still be excluded from the [inner sanctum] of the Temple.” 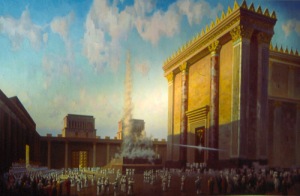 What Herod changed, at least according to this article’s writer and his source, Matan Orian, a PhD student at Tel Aviv University, was the perception, based on one interpretation of Numbers 18:7, that Gentiles were “intrinsically impure”. This interpretation may be the reason even Rav Yeshua’s (Jesus’) Apostles, including Peter, typically viewed and treated Gentiles as “unclean”.

And he said to them, “You yourselves know how unlawful it is for a man who is a Jew to associate with a foreigner or to visit him; and yet God has shown me that I should not call any man unholy or unclean.”

I’d have to guess that Peter may have been operating from the perception that all Gentiles were “intrinsically impure,” and yet, the Almighty showed Peter in a vision that the Gentiles should not be treated as “unholy or unclean.”

Of course, as the article states, this didn’t mean Gentiles, even among the Jewish Yeshua-followers of “the Way,” would have accepted in every area of the Temple, even if they were considered to be clean. There was a point on the Temple grounds where it would have been an outrage if a Gentile were to enter.

When the seven days were almost over, the Jews from Asia, upon seeing him in the temple, began to stir up all the crowd and laid hands on him, crying out, “Men of Israel, come to our aid! This is the man who preaches to all men everywhere against our people and the Law and this place; and besides he has even brought Greeks into the temple and has defiled this holy place.” For they had previously seen Trophimus the Ephesian in the city with him, and they supposed that Paul had brought him into the temple.

Of course, Jewish understanding of the presence and role of Gentiles on any part of the Temple grounds has changed over time.

Despite the Herodian-era status quo, in which gentiles and Jews mingled atop the Temple Mount, most rabbis today maintain the tradition that the entire complex is holy ground and Jewish entry is forbidden. That ban stems from uncertainty over where precisely the Holy of Holies stood. 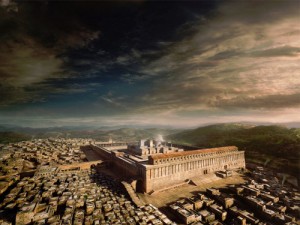 The information in this article hints at a greater Gentile involvement in the Herodian Temple than most of us might have imagined, and further suggests that this was manipulated by Herod for political/social reasons, rather than theological insight. Nevertheless, it’s exciting to consider the possibility that in the Messianic Age, non-Jews visiting Jerusalem may also be granted, while not completely free access to the Temple, a greater measure of mobility on the Temple grounds, as well as the opportunity to offer sacrifices via the Aaronic and Levitical Priests.

I don’t have any special insights into all this. I just read the article and it sparked a thought or two. Mainly, I just wanted to share.