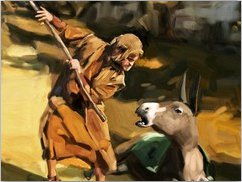 Then the Lord opened the ass’s mouth, and she said to Balaam, “What have I done to you that you have beaten me these three times?” Balaam said to the ass, “You have made a mockery of me! If I had a sword with me, I’d kill you.” The ass said to Balaam, “Look, I am the ass that you have been riding all along until this day! Have I been in the habit of doing thus to you?” And he answered, “No.”

Then the Lord uncovered Balaam’s eyes, and he saw the angel of the Lord standing in the way, his drawn sword in his hand; thereupon he bowed right down to the ground. –Numbers 22:24-31 (JPS Tanakh)

This villain was going to curse an entire nation which had not sinned against him [merely by the power of his speech], yet he has to smite his donkey [with his hand] to prevent it from going into a field! …the donkey spoke to Balaam saying, “You need a sword in your hand to kill me? How then do you intend to uproot an entire nation with only your words?” Balaam could not think of an answer, so he kept silent. –Numbers Rabbah 20:14

This week’s Torah Portion Balak could easily be called “Don’t make an ass out of yourself”. Balaam, the wicked prophet, who referred to himself as “the man whose eye is opened” (Numbers 24:4), wasn’t seeing so well when God sent an angel to stop him, three times, from cursing the Children of Israel. But lest you consider yourself superior to this ancient wizard, consider that you too have been blind when it comes to God. Paul said, “as it is written: “None is righteous, no, not one” (Romans 3:10), and his words certainly must apply to you and me. There is a difference between what we think we see and know and what we truly perceive and understand. In our arrogance and “self-confidence”, we can be humbled, even by a lowly ass.

A few months ago, I wrote a small missive about the difference between faith and trust in God. Many have faith, but trust is much more rare. Few souls attain that truly exalted level of holiness we all desire:

The Talmud says that Jacob, our father, never died. Moses, also, never died. Neither did Rabbi Judah the Prince. They were very high souls who were one with Truth in an ultimate bond—and since Truth can never die, neither could they.

Yes, in our eyes we see death. A body is buried in the ground, and we must mourn the loss. But this is only part of the falseness of our world. In the World of Truth, they are still here as before.

And the proof: We are still here. For if these high souls would not be with us in our world, all that we know would cease to exist.

On the 3rd of Tammuz on the Jewish religious calendar (sundown July 4th to sundown July 5th this year) is the seventeenth yahrtzeit of the Rebbe, Rabbi Menachem M. Schneerson, of righteous memory, and the yahrtzeit of an exalted sage or tzadik is traditionally a day for reflection, learning, prayer, positive resolutions and acts of loving-kindness. It is an opportunity to humble ourselves before God and before men, set aside an overabundance of confidence in our ability to “see” God and to instead, seek Him with a contrite heart and a desire to rise to a higher level of trust and spirituality.

For this occasion, Rabbi Ezra Schochet writes of Joyful Remorse; the act of repenting or making teshuvah, not with tears and anguish, but with gladness and rejoicing in our hearts.

The Rebbe continued saying that, in fact, repentance is greater than every mitzvah. Its purpose is to correct the transgression of all other commandments, it must fill the spiritual “gap” that the lack of observance engendered. Teshuvah’s ability to do so stems from the fact that it emanates from a higher spiritual source than all the others (as explained at length in the chassidic texts). And “the greater the mitzvah, the greater the joy.”

It would seem that tears and sorrow would be the more appropriate response when repenting of our sins and short-sightedness, but we see here that in performing teshuvah, we are clearing the barriers away that stand between us and God. What could be a better time to celebrate, to lift our spirits high, and to cry out and give thanks to God for desiring that we return to Him?

Blessed are you O Lord our God, King of the Universe, who desires repentance.

-from the daily prayers