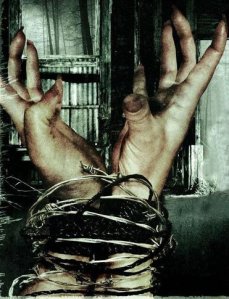 These things are being taken figuratively: The women represent two covenants. One covenant is from Mount Sinai and bears children who are to be slaves: This is Hagar. Now Hagar stands for Mount Sinai in Arabia and corresponds to the present city of Jerusalem, because she is in slavery with her children. But the Jerusalem that is above is free, and she is our mother. –Galatians 4:21-26

Speak and act as those who are going to be judged by the law that gives freedom, because judgment without mercy will be shown to anyone who has not been merciful. Mercy triumphs over judgment. –James 2:12-13

So what is it? Does the Law take away freedom or does the law give freedom? Are we even talking about the same Law; the Torah?

I’ve often suspected that Paul and James didn’t see eye-to-eye on many issues. Paul was operating for years at a time in the diaspora, bringing the Gentiles to faith in the Jewish Messiah and teaching them his ways and how to trust in God. There wasn’t a lot of oversight going on from the Jerusalem Counsel, so Paul could have gotten away with re-writing the Gospel message in his own image, diluting or even eliminating the law and replacing it a type of “grace” that is the antithesis of the law (though in reality, they are not mutually exclusive). It’s clear that James wouldn’t have agreed with that message.

However, if you read D. Thomas Lancaster’s new book The Holy Epistle to the Galatians, you’ll see that Paul and James were more alike than unalike (though I still suspect that they had their individual perspectives). For one thing, despite the common Christian tradition of interpreting Galatians 4:21-26 as “anti-Law” (and in the plain English text, it certainly seems that’s what Paul’s saying), the issues are more complex. Lancaster interprets them this way:

The passage contrasts two types of proselytes: the legal proselyte and the spiritual proselyte. The one becomes part of Abraham’s family by conventional conversion, the other through faith in Messiah, the promised seed of Abraham, in whom all nations find blessing. The passage does not contrast the Old Testament against the New Testament or the Old Covenant with the New Covenant. It does not equate Judaism and Torah with slavery, nor does it pit Christians against Jews.

I’ve already written a review of Lancaster’s book and I’m not going to “reinvent the wheel”, so to speak, but I’m presenting this “extra meditation” this afternoon, in response to the following:

No one can say he is free today because yesterday he was granted freedom.

You are free when you take part in that endlessness. When you never stand still. When you are forever escaping the confines of today to create a freer tomorrow.

As an Orthodox Jew, Rabbi Freeman isn’t considering that the Torah is somehow slavery or bondage, even for a single moment. So how are Christians to interpret his words of freedom as well as the apparent conflict between Paul and James, both observant and devout Jews, on how they view the Torah?

It is said that the world was created for the sake of Torah and that, without the Torah, the world could not have been made. The analogous teaching we have in Christianity is this:

Here, we see a sort of “fusion” or co-identity, in some mystic sense, between the Torah and the Messiah, Son of the living God. Christians know that Jesus gives us freedom from the slavery of sin and Jews know that the Torah is the gateway to God’s endless energy, the power behind the universe, and the limitless, eternal source that creates existence out of nothingness. Through Torah, God does not enslave, but provides the means by which men may know God and understand our relationship to Him. If the same can be said of Jesus, then we can all understand from where our freedom comes.

While non-Jewish disciples of the Jewish Messiah are not obligated to the same “yoke of Torah” as the Jewish people (see Acts 15), we nonetheless are grafted into the root of the Tree of Life and like branches on the vine, we draw our nourishment and the ability to live a life of holiness from an identical source; God.

To do so requires more than just believing and more than just learning; we must do, we must behave, we must live out the values we understand from the Torah and how they were taught to us by the “living Torah”, the Moshiach, Jesus Christ. Part of that living is understanding where we came from, who we are, and our need to separate from sin and embrace holiness and peace. To gain freedom from sin, we must recognize the depth and despair of sin, which is what the Torah aptly defines, and only upon achieving that understanding, can we truly turn away from that sin and turn toward the God of Abraham, Isaac, and Jacob:

The Ohr Hachaim HaKadosh, zt”l, writes that one can only do teshuvah if he first recognizes the gravity of his sin.

A certain person committed a sin. When Rav Mordechai Aryeh Halevi Horowitz, zt”l, gently nudged him to repent the sinner displayed his relaxed attitude towards teshuvah. “Why repent now? Soon enough it will be Elul, the season when the shofar is sounded to remind us to do teshuvah. Can’t my teshuvah wait until then?”

Rav Horowitz rejected this attitude out of hand. “As is well known, the main element in teshuvah is havdalah, separating between what is proper and what is not. It is only by determining which actions lead to darkness and which generate light that we act as is fitting. Even if a person with understanding falls to sin chas v’shalom, he knows to repent and change his ways. But many people wait until Elul to do teshuvah. After all, isn’t that when we are aroused to repentance by the shofar as the Rambam writes?

“We find in the Mishnah in Chulin 26 that whenever the Shofar is sounded we do not say havdalah. Conversely, whenever we say havdalah we do not sound the shofar. Although on a simple level this is a sign for when they would blow the shofar to signify the onset of Shabbos or Yom Tov, this statement also teaches a lesson about teshuvah. When one feels justified waiting to do teshuvah until the shofar is sounded during Elul, this shows he lacks understanding. He does not comprehend the gravity of sins since this leads to havdalah, healthy separation between what is right and what is wrong. One who has fitting discrimination between good and bad doesn’t wait to hear the shofar to repent!”

If we claim to be without sin, we deceive ourselves and the truth is not in us. If we confess our sins, he is faithful and just and will forgive us our sins and purify us from all unrighteousness. –1 John 1:8-9