“If, along the road, you chance upon a bird’s nest, in any tree or on the ground, with fledglings or eggs and the mother sitting over the fledglings or on the eggs, do not take the mother together with her young.” –Deuteronomy 22:6 (JPS Tanakh)

Rural areas have both advantages and disadvantages, even in terms of observing mitzvos. One of the advantages is bonafide opportunities to fulfill the mitzvah of shiluach hakein, sending away the mother bird to take the eggs or chicks discussed in the last chapter of Chullin, which begins with today’s daf. One of the strange things about fulfilling rare mitzvos is that that one has no experience of exactly how to fulfill the mitzvah or various details relevant to it.

The Beraisa teaches that there is no requirement to search for
a nest in order to fulfill the mitzvah of sending away the mother
bird from its nest. This mitzvah is only incumbent upon a person
if he happens to come across a nest.

Is there an obligation to pursue other mitzvos, or are we expected
to fulfill mitzvos only when they come our way?

Daf Yomi Digest
Distinctive Insight
“Is one required to pursue finding a nest, or does it apply only when one comes across a nest?”
Chillun 139

I often include quotes in my blog posts that no doubt seem strange, mysterious, or perhaps even ridiculous to a Christian. Comprehending Jewish Rabbinic teachings, opinions, and rulings is something that is generally disregarded in the church and considered the “wisdom of men” working in opposition to the Word of God. While I don’t want to debate such a broad topic in today’s “morning meditation”, I do want to see if we Christians can take away anything from some of these teachings (and I wouldn’t be writing about this unless I thought it was possible).

Christians believe that we should do good, as we were taught by Jesus. That we should give people who are hungry and thirsty food and drink, visit the sick and the prisoner, and clothe those without adequate clothing is clearly illustrated in teachings such as the one we find in Matthew 25:31-46. In fact, Jesus states that seeing a person in need and failing to help them will result in our being sent to “eternal punishment”, so just “believing in Jesus” in our minds and hearts is hardly enough to “save” us.

However, are we only to perform such acts of kindness if the opportunity comes our way, or are we, as Christians, to actively seek out situations where we can do what we have been commanded to do? Let me give you another example.

Therefore go and make disciples of all nations, baptizing them in the name of the Father and of the Son and of the Holy Spirit, and teaching them to obey everything I have commanded you. –Matthew 28:19-20

This directive of Jesus to his Jewish disciples is commonly referred to as “the Great Commission”. Entire churches and religious organizations are dedicated to fulfilling this commandment by evangelizing to not only people in our lives, but entire nations and people groups. There are specific missions devoted to evangelizing the Jewish people (much to the consternation of many Jews). Churches regularly send representatives to third-world countries to teach the Gospel of love and salvation to the people living there.

In other words, as far as “the Great Commission” is concerned, a significant percentage of the body of Christ deliberately and actively seeks to fulfill the commandment, rather than waiting for some opportunity to arise where we can perform evangelism.

While Christianity doesn’t provide an organized list of our duties, Judaism very specifically codifies the responsibilities of each Jewish person as 613 commandments. A few days ago, I quoted Rabbi Shmuley Boteach as saying:

There are 613 commandments in the Torah. One is to refrain from gay sex. Another is for men and women to marry and have children. So when Jewish gay couples tell me they have never been attracted to members of the opposite sex and are desperately alone, I tell them, “You have 611 commandments left. That should keep you busy.”

He seemed to be saying that, even if you cannot obey all of the commandments, there is much merit in obeying some or even most of them. This defies the common Christian criticism of “the Law” in that Torah obedience is supposed to be an all or nothing affair. Christians believe that no human being can always keep the Law and that no one, except Jesus, ever perfectly obeyed the mitzvot. It also appears to indicate that the various commandments stand alone or are contained in distinct “silos” of activity so that a Jew can be doing good by obeying some of the mitzvot while not obeying others. Additionally, there’s the idea that each mitzvah is unique and has some sort of individual value not carried by the others. Sort of like obeying the mitzvah of visiting the sick carrying a wholly different merit than the mitzvah of (for a Jew) praying with tefillin.

There is an excellent example of this in the Preface to The Concise Book of Mitzvoth: The Commnandments Which Can Be Observed Today as authored by Israel Meir Kagan and translated Charles Wengrov. Preface writer Ben Zion Sobel discusses the commandment to compensate a hired worker within a specific time frame:

Now, one who is not an employer might think that he has no opportunity to fulfill this commandment and be rewarded for it. But if he were to examine his everyday activities, he would realize that in fact, this mitzvah comes his way more often than he imagined.

For example, whenever one hires a painter to paint his house, or a handyman to build or repair something, or a plumber to fix a leak, he is required to pay the hired worker on time. Moreover, whenever one rides in a coach (or in our times, in a taxi), he has actually “hired” the driver to transport him to his destination, and he is thus responsible for seeing to it that the driver’s wages are paid promptly. Before paying, he is to take a momemt to say to himself, “I am about to perform the commandment of my Creator, Who instructed us to pay a worker on time.” Then he would deserve the full reward for having fulfilled a mitzvah of the Torah. 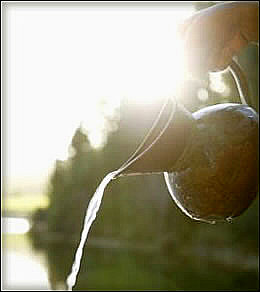 As I mentioned before, this is a very different way for a Christian to think about performing acts of charity and righteousness, especially the “reward” part. And yet being rewarded for obeying God and doing good deeds is not alien to Christianity.

For I am already being poured out like a drink offering, and the time for my departure is near. I have fought the good fight, I have finished the race, I have kept the faith. Now there is in store for me the crown of righteousness, which the Lord, the righteous Judge, will award to me on that day—and not only to me, but also to all who have longed for his appearing. –2 Timothy 4:6-8

Paul was a Jew and he conceptualized the world around him, including God, the Messiah, and the mitzvot, as a first century Jew. It’s no mystery that what he wrote actually fits into how later, Talmudic period Jews conceptualized their role in relation to the Torah. As 21st century Gentile Christians, do we allow this “intersection” of the New Testament, the Torah, and The Concise Book of Mitzvoth to get in our way or to provide a lens of clarity? Was Paul’s statement in 2 Timothy 4 “too Jewish” for us to understand and thus do we ignore it, deferring only to NT writings that are more palitable to the non-Jew, or do we start to realize that there is something in Judaism that provides context, understanding, and focus to our lives as disciples of the Master?

Returning to the mitzvah of shiluach hakein, there are apparent contradictions in the interpretations regarding this particular commandment and on the whole, Christians would rather not be bothered with having to puzzle through our responsibilities to God and our duties to Jesus. When we think of ourselves as “free from the Law”, we imagine we are free from having to put much time and effort into understanding who we are and what our God desires from us.

However, maybe God has, in some way, built complexity into His desires for us on purpose. Maybe we are supposed to actually think and not just feel about a life of faith, compassion, and holiness. If we engage more of who we are and more of our internal and external resources into living a life conforming to God’s will, more of who we are is involved in that holiness. We are forced to consider even the most trivial of actions in relation to what God wants us to do and how He wants us to do them.

I’m not saying that Christians should emulate Jews in every small detail. Far from it. But I am saying that we can take the “light” that Judaism shines on God and His Word and use that light to see how we can be better disciples and servants of both our Creator and his beloved creations.

7 thoughts on “On Considering Christian Halachah”