Judah approaches Joseph to plead for the release of Benjamin, offering himself as a slave to the Egyptian ruler in Benjamin’s stead. Upon witnessing his brothers’ loyalty to one another, Joseph reveals his identity to them. “I am Joseph,” he declares. “Is my father still alive?”

The brothers are overcome by shame and remorse, but Joseph comforts them. “It was not you who sent me here,” he says to them, “but G-d. It has all been ordained from Above to save us, and the entire region, from famine.”

The brothers rush back to Canaan with the news. Jacob comes to Egypt with his sons and their families—seventy souls in all—and is reunited with his beloved son after 22 years. On his way to Egypt he receives the divine promise: “Fear not to go down to Egypt; for I will there make of you a great nation. I will go down with you into Egypt, and I will also surely bring you up again.”

Joseph gathers the wealth of Egypt by selling food and seed during the famine. Pharaoh gives Jacob’s family the fertile county of Goshen to settle, and the children of Israel prosper in their Egyptian exile.

Parashah in a Nutshell
Commentary on Torah Portion Vayigash
Chabad.org

Most of the time, when we study this Torah portion, we focus on the positive events that are depicted, such as Joseph finally revealing his identity to his brothers, the forgiveness and grace he shows them, in spite of their past cruelty to him, and especially the long-awaited reunion of Joseph with his grieving father Jacob. The Children of Israel are conducted to Goshen in Egypt and given the fat of the land, prosperity, and safety.

But what about all of the suffering?

As joyous as the reunion between Joseph and Jacob is (Genesis 46:28-30), there were the decades of grieving and terrible sorrow that Jacob suffered. He believed all this time that Joseph, his most beloved and cherished son, was dead. Once made Viceroy of Egypt, at any time, Joseph could have ordered that a message be sent to his father to comfort and reassure him. But no message was sent. Jacob remained in anguish, even as Joseph ruled.

While God reassured Jacob that He will go down into Egypt with him (Genesis 46:1-4) and we read that Israel is given “the choicest part of the land of Egypt” (Genesis 47:11), what about the harsh and horrible centuries to come, after the death of Joseph, when a “new king arose over Egypt who did not know Joseph” (Exodus 1:8) and Pharaoh oppressed Israel with burdensome labor and slavery (Exodus 1:13-14)? What about the murder of all of the male Israelite newborns (Exodus 1:22)? What of the cries of their mothers? 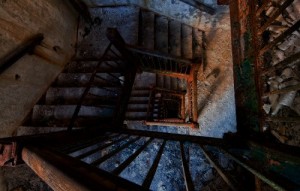 There is a saying in Kabbalistic circles that “for every descent there is an ascent.” We can certainly apply this to every time we have experienced disappointment and even tragedy that ultimately has resulted in a great benefit to us. The first thing that I think of is the “descent” the disciples of Jesus felt at his crucifixion and how all hope was lost to them (Luke 24:11). Even though Jesus had told them that he would be “handed over” and killed (Matthew 26:2, Mark 10:33, Luke 24:7), their faith melted like a snow cone in an Arizona heat wave. There are times in all our lives when only the barest shred of faith separates us from abject despair and the longing for death.

In 1798, Rabbi Schneur Zalman of Liadi was imprisoned by the czarist government on charges fabricated against him and the chasssidic movement.

When he was brought before his interrogators, the first question they asked him was: “Are you of Rabbi Israel Baal Shem Tov’s people?” Rabbi Schneur Zalman later related that he knew that if answered “no” he would be immediately released; nevertheless, he refused to disassociate himself from the Baal Shem Tov.

His 52 days of imprisonement in the Peter-Paul fortress in Petersburg were the most agonizing days of his life. He was forced to explain the basic tenents of Judaism and chassidism to the coarse Cossack minds of his questioners. He wept when he was asked “What is a Jew?”, “What is G-d?”, “What is the relationship of a Jew to G-d? Of G-d to a Jew?” – to hear these questions issuing from their vulgar mouths tore his heart to shreds.

One question in particular caused him great pain. It was Rabbi Schneur Zalman’s custom to interject the expression “af” in his prayers, as did the Baal Shem Tov. His enemies misconstrued this to mean that he was beseeching the Almighty to pour His wrath (‘af’ in Hebrew) upon the czar and his government. To explain to the Russian officials the Baal Shem Tov’s customs and his lofty reflections during prayer was torture to Rabbi Schneur Zalman’s soul.

Here too, Rabbi Schneur Zalman could have satisfied their queries with all sorts of answers. But his connection with the Baal Shem Tov, whom he called his ‘grandfather in spirit’, was so dear to him, that he refused to disclaim it in even the slightest detail, even if only for appearances sake.

-Rabbi Yanki Tauber
“Inseparable Souls”
Once Upon a Chassid
Chabad.org

This Chassidic tale illustrates the faith of a holy man but it also addresses his descent and his non-apparent ascent. While Rabbi Zalman was released after 52 days, Rabbi Tauber does not reveal the ultimate fate of this tzaddik. We can infer however that he was not elevated to a high ranking position in Czarist Russia as Joseph was in Egypt. Though he was finally freed from incarceration, where was his ascent?

During his journey to Egypt, Yaakov had a vision in which G-d reassured him: (Genesis 46:3-4) “Do not fear to descend to Egypt,” and promised “I will descend to Egypt with you and I will surely have you ascend.” Although Yaakov realized what he could achieve in Egypt, he was reluctant to descend there. For prosperity in exile even prosperity that is used to create a model of spiritually oriented existence is not the goal of a Jew’s life.

Why then did Yaakov descend to Egypt? Because he appreciated that the Redemption must be brought about by the Divine service of man. The establishment of a spiritually oriented society amidst material prosperity provides man with a foretaste of the Redemption, and prepares the world for the time when redemption will become manifest. Yaakov’s life in Egypt was dedicated to this purpose.

The theme of redemption is underscored by the Haftorah, which speaks about the ultimate union of Yosef and Yehudah: (Ezekiel 37:21-22) “I will take the children of Israel from among the nations… and bring them to their own land. I will make them one nation in the land…. No longer will they be two nations, no longer divided into two kingdoms.” And it promises: “And My servant David will be their prince forever,” for it is in the Era of the Redemption that the selfless striving for unity will receive the prominence it deserves.

The ascent for Rabbi Zalman and indeed the ascent for Joseph and Jacob and for the grieving and heartbroken Apostles and for us is the same. To one day live in peace under the wings of the Maschiach; the Messiah. We Christians have that promise as well through faith in him who is our light. Though we descend with no ascent in sight, perhaps no ascent even within our mortal lifespan, we will ultimately dwell with our King and our Lord and eat at the feast of Abraham, Isaac, and Jacob (Matthew 8:11).

He shall judge between many peoples,
and shall decide for strong nations far away;
and they shall beat their swords into plowshares,
and their spears into pruning hooks;
nation shall not lift up sword against nation,
neither shall they learn war anymore;
but they shall sit every man under his vine and under his fig tree,
and no one shall make them afraid,
for the mouth of the LORD of hosts has spoken. –Micah 4:3-4