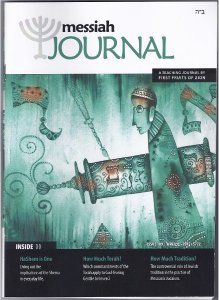 When I saw the title, I thought the topic would be more related to the specific differences between halacha in traditional, Orthodox Judaism and a halacha that could be applied to Jewish, and perhaps in some sense, to non-Jewish disciples of the Master in a Messianic framework. However, Sadan’s excellent article, which was originally delivered as a lecture in Israel on September 5, 2008, addresses something else almost entirely: the religion of the Jews who follow the Messiah.

There is an impression that the Jews, and especially the Jews who were born, raised, and educated within a traditional religious and cultural Jewish framework, who are part of Messianic Judaism and who are disciples of Yeshua (Jesus), “the Maggid of Nataret,” belong to a different sort of “Judaism” than their brothers in what we refer to as “Rabbinic Judaism.” In fact, many Jews and non-Jews in other branches of the “Messianic” movement, as well as those attached to Hebrew Roots groups, tend to view Rabbinic Judaism, what we consider the Reform, Conservative, and especially Orthodox branches of Judaism, to be separate, distinct, and “lesser” forms of “true” Judaism. They seem to believe that the only fully realized Judaism is represented by a Messianic Judaism that follows Jesus while removing any aspect of halacha and tradition that exceeds the “written Torah.” This form of Messianic Judaism, actually rejects Rabbinic Judaism in the vast majority of its content (except for using the model of the modern synagogue service and the use of tallitot, siddurim, and so forth) especially and including Mishnah, Talmud, and Gemara: the so called leaven of the Pharisees and the Sadducees” (see Matthew 16:6 and Mark 8:15).

According to Tsvi Sadan, they are dead wrong. Forgive me. What follows is necessarily lengthy.

To understand the meaning of this “leaven,” which scares the daylights out of some people here, I will take just one verse from an abundance of new Testament verses quoted in those inflammatory letters. In Matthew 16 (the word “hypocrites” does not appear in the standard Greek text used today), Yeshua twice calls his disciples to beware of the “leaven of the Pharisees and the Sadducees” (vv. 6, 11). These two admonitions follow the miracles and wonders which he had just performed in the sight of thousands of people. When the Pharisees and the Sadducees approach him to test him (v. 1), Yeshua correctly sees this as impudence of the highest order, and responds accordingly: “[Hypocrites,] do you know how to discern the appearance of the sky but cannot discern the sign of the times?” (v. 3). This means that Yeshua is labeling his opponents hypocrites because of their pretense to see one more sign while in fact all they wanted to do is accuse him.

Finally, let me make one point with respect to the Christians living in our midst, because probably there is someone who will distort things and claim that the position I have proposed here leads to hated of the Gentiles. Let me say here that I warmly welcome every Christian – on the condition that he or she does not attempt to impose his or her religion on me. I regard very seriously the behavior of some Christians living in Israel who have the gall to malign the Jews living in the state of Israel merely because they refuse to be evangelicals, Lutherans, or Baptists. God-fearers from all nations are welcome to participate in the Jewish service of God as long as they do not speak against Israel, Torah, and Judaism. I do not agree with the attitude that says that in order to achieve unity with our Gentile brethren, we should remain Jews but reject Judaism. I consider this assertion as nothing less than complete and utter foolishness. 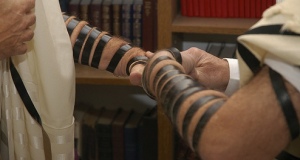 Sadan continues to strongly make his point for another page and a half, and most assuredly all of it, as I imagine these brief quotes have done, will certainly bring forth the ire of many non-Jews and some Jews in the aforementioned “Messianic” and Hebrew Roots movements, who indeed believe that the Jews who worship the Messiah must abandon Judaism in order to be “completed Jews” (as if a Jew who worships in the manner of his fathers is somehow incomplete).

Sadan’s article does bring up one very interesting point: do Messianic Jews and Gentile Christians belong to two separate and unrelated religions? I have no idea what Sadan thinks, but as far as I can gather from his article, the response seems to be “yes and no.”

It’s “yes” in the sense that everything that Judaism is, including the 613 commandments of the Torah and the entire body of Talmudic judgments, rulings, and traditions, apply only to a Jewish population. Judaism’s ethnic and cultural aspects are completely intertwined with Judaism as a “religion,” so you cannot remove the traditions, without removing what it is that defines a Jew. I’ve said all this before and Sadan’s article does nothing to change my mind.

It’s “no” in the sense that, in spite of the differences in our covenant obligations to God, we share One God and One Messiah, and we are all His creations. We are different branches, but grafted into the same tree. We are Jew and Gentile, but we have equal access to God. We are co-citizens in the Kingdom of Heaven and we all inherit a life in the world to come. And we will all sit at the same table at the feast of Abraham, Isaac, and Jacob (Matthew 8:11).

I do want to take exception to one statement in the article where it appears Sadan refers to we Christians as “God-fearers”.

God-fearers from all nations are welcome to participate in the Jewish service of God as long as they do not speak against Israel, Torah, and Judaism.

I don’t believe that Christians who have accepted the Messianic covenant upon themselves (as it applies to the nations) are equivalent to the ancient God-fearers or the modern Noahides. God-fearers were non-Jews who came out of pagan worship to recognize the God of Abraham, Isaac, and Jacob as the One, true, and unique God of the Universe. They quietly worshiped among the Jews in their synagogues and I imagine the God-fearers humbly populating the Court of the Gentiles in Herod’s Temple, listening with awe to the songs of the Priests, and urgently desiring to bring their own sacrifices before the King.

But they had no covenant relationship with God at all. There was adoration and worship, but no access (unless they chose to convert to Judaism). Jesus, the Messiah, appeared in the world and changed all that. He allowed the nations to come close to God, to be adopted, and to be called sons and daughters of the Most High, through the blood of “the Lamb of God who takes away the sin of the world,” (John 1:29). I certainly hope that Sadan hasn’t chosen to “demote” those of us who come along side him as co-members of the Messianic covenant.

If you’re not familiar with some of the related concepts Mark Kinzer describes in his book Postmissionary Messianic Judaism: Redefining Christian Engagement with the Jewish People, you may find Sadan’s article shocking and even completely alien to how you’ve imagined Jews being attached to Jesus as their own Messiah. If you are familiar with Kinzer’s book, some of you may still be outraged at what Sadan writes and vehemently disagree with his propositions and his ardent passion in defending his own Judaism.

This issue of Messiah Journal couldn’t have come at a better time for me. Last night, I was having a conversation with Judah Gabriel Himango on his Facebook page about the Shabbat and what the coming of Jesus changed in the Jewish and non-Jewish worlds. Judah suggested that because of Jesus, Jews should abandon the traditional Jewish synagogue model of worship and adopt a Shabbat service more along the lines of what’s recorded in 1 Corinthians 14:26-40. Here are some of his comments:

Messiah’s arrival was of such great impact, such that the way we live our lives and the way our congregations are modeled must be in light of his coming. Lives and religious services modeled on the understanding that Messiah hasn’t come would be to live as if he never arrived in the first place. The Messianic movement, including the Messianic Judaism subset, should not merely be emulators of Judaism.

How about the stuff in Corinthians 14 for starters? Shouldn’t those things be in Messianic services?

And how about the Psalms, where music and instruments are used to praise the Lord? Shouldn’t those things be in services, both Jewish and Messianic?

I believe people — Jews and gentiles — should change their lives around to what Messiah commanded and what his disciples taught in the Scriptures.

If our lives and our services look exactly like those before Messiah, it’s as if his arrival never happened.

Needless to say, I disagreed. 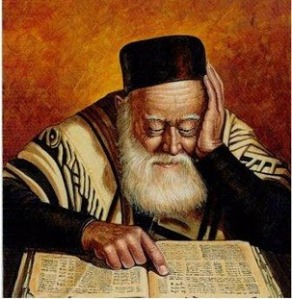 Let me make clear that I like Judah and I’m not angry or upset with him. I’m not picking on him or singling Judah out, but rather, I’m using his words to illustrate what many other disciples of Jesus believe and want to see actually occur. I must disagree with his desire to replace Jewish worship with how he interprets one small portion of the New Testament, as well as with the general suggestion among Christians, that Messianic Jews should remain (somehow) Jews but flush Judaism down the nearest toilet, tossing Rabbis and Talmud under a speeding bus. While I have questions about how Sadan sees Christians vs. God-fearers, I agree with him in most if not all of the rest of his points. I can’t see the Gentiles in the church and in “Messianism” and Hebrew Roots as having any right whatsoever to re-define Judaism in their own image. Of course, they say that it’s not they who are doing the re-defining, but Jesus instead, but I disagree. We’ve seen that there are an abundant number of paths one can take to interpret the New Testament, including doing away with the Law (and the Jews) and replacing it with the Grace of Christ (and the Gentile Christians), and I disagree with that as well (see my article in MJ 109 “Origins of Supersessionism in the Church” for more).

In previous blog posts and blog comments, I’ve tried to make arguments that present many of the same ideas as expressed in Tsvi Sadan’s “Halachic Authority in the Life of the Messianic Community,” but I lack his insights and perspectives as a Jew and frankly, his wonderful talent in writing. Whether you end up agreeing with him or not, I believe that reading this illuminating work will open your eyes to a new and different way of seeing the Jew in relationship to his Messiah within the time-honored and God-granted context of Judaism.