This “logic” is plainly presented in Galatians 3. God had a very good reason to institute the Law of Moses and it has nothing to with “bait and switch.” It had to do with point and lead until the fulfillment of its goal. The emphasis of the salvation that was to come for all of mankind goes back to the promise made to Abraham.

Ziesler, “Role of the Tenth Commandment,” p. 50, makes the important observation in Rom. 8:4 of the use of the singular…(“requirement”) in Paul’s conclusion: “having talked in 7.1-6 about dying to the Law, Paul now in a notably bald statement appears to bring us back to life again in relation to the Law, if not under it. We died to the Law in order to keep it better.” He further suggests that this singular reference keeps the singular sin of covetousness in perspective (pp.50-51).

Snodgrass, “Spheres of Influence,” p. 107 states: “If the law is not involved in salvation, then sin is a victor because it defeated God’s law which was for life (7.12.10). But now the law is placed within the sphere of the Spirit (cf. 8.4), where it belongs (7.14). The law in the right sphere frees us from the tyranny of the law in the sphere of sin. I do not think we can ignore a reference to the OT law. It is through the law that Paul died to the law.”

Important Note! Please read the first comment made by Eugene Adkins below, as he corrects some mistakes I made about his background and role. I apologize to Eugene and to everyone reading this for my errors.

I’ve been debating with Pastor Eugene Adkins in the comments section of my blog post The Lord’s Sabbath regarding what he refers to as “fulfillment theology” and what I consider supersessionism or “replacement theology” (see our series of comments on the aforementioned blog post for full details of this discussion and specifically Pastor Adkins’ comments submitted on Jan 27, 2012 @ 17:31 hours).

In response to some of Pastor Atkins’ points, I’ve quoted from both Lancaster’s recent Galatians book and the classic Nanos tome on Romans (or rather, some footnotes contained within the Nanos book). I’m doing this for several reasons. The first is that, unlike Pastor Adkins, I do not have a post-graduate degree in any form of religious studies (I assume as a Pastor that Adkins is so educated) and thus do not have skill sets equal to his own as far as debating the scriptures. In order to support my arguments, I must rely on the scholarship of external sources, namely the previously mentioned Lancaster and Nanos books.

Secondly, I want to introduce valid and scholarly sources that refute or at least bring into question the traditional Christian view that the Torah was only temporary for the Jewish people (and I have never said that the Law was intended to apply equally to the Jewish and Gentile disciples of Jesus in any equal fashion) and that once Christ lived, died, was resurrected, and ascended, that the Law became null and void (or “fulfilled” in the sense that its temporary purpose as completely satisfied and then ended), and wholly replaced by what Pastor Adkins refers to as Christ’s “international covenant” that applies uniformly to Jewish and non-Jewish disciples of Jesus. I’m trying to point out here that perhaps Pastor Adkins’ interpretation of scripture (which seems to be the interpretation of the church in general) is not the only possible way to understand what Paul was saying to the congregations of Rome and Galatia.

Finally, I want to be fair. There is a tremendous tendency for me to simply dig in my heels, say “you’re wrong,” and base my subsequent responses on my emotional states, particularly those that have to do with Christian supersessionism and its terrible (and often fatal) effect upon the Jewish people across 2,000 years of church history. But that’s not the right thing to do. I want to respond based not only on my spiritual “understanding” of God’s relationship with both Jews and Gentiles (which is completely subjective and therefore, unable to be objectively demonstrated) but on Biblical scholarship as well. The problem here is that I’m like Woody Allen trying to go a few rounds in the ring with Mike Tyson as far as our relative educational backgrounds go (well, probably not that bad).

I have two undergraduate degrees and a post-grad degree, but none of them are in subjects relevant to this conversation. Given my job, my book writing, and my family commitments, I don’t have the time or other resources to go back to school and take another degree, or to perform the necessary research to adequately respond to all of the specific points being brought up in this discussion in order to sufficiently represent my point of view. I believe I’m right based on everything I’ve learned thus far, but belief isn’t enough. I must have proof beyond what I have already demonstrated, both online and in print. Also, assuming that I can be wrong (and I know I can be), I need to either confirm or refute my current belief system using concrete evidence (or as “concrete” as anything gets in theological debates).

That’s where you, dear readers, come in. I’m calling for backup. Or I’m willing to be presented with irrefutable proof that the New Testament writings can be interpreted in one and only one, single manner, and that the one and only interpretation is held under lock and key by the 21st century evangelical Christian church. I personally don’t think it is, but like I said, I want to be fair.

I want to say to you personally Eugene, that I’m not writing this to try and be mean or unfeeling or offensive in any way. I know you are sincere and are representing the truth based on everything you’ve been taught and everything you believe, both intellectually and through your faith. I don’t have a problem with any of that. None of this is motivated by any dislike of or anger toward you. I respect your service to God and thank you for continuing to participate in our dialog rather than summarily “writing me off” as some sort of “religious nut.”

My problem with the traditional Christian position on supersessionism is that, even clothed in a pleasing and benign exterior, this “fulfillment theology” is a nearly 2,000 year old artifact that was first created when the schism between Jewish and non-Jewish believers began to develop and then exploded across the early history of the church, in order to artificially justify the ascension of the Gentiles over the Jews in Messiah, and to literally re-write the nature and character of Christian vs. Jewish “Messianism,” as we see in part here:

The destruction of the Second Temple in 70 CE and the subsequent expulsion of the majority of Jews from what would be called Palestine marked a disastrous shift in the Jewish authority over the Messianic community. Up until that time, the head of the Jerusalem leadership of the Messianic community, otherwise referred to as “the bishop of the church”, had always been Jewish. Once the Jews were expelled from Jerusalem by Hadrian, for the first time a Gentile had to be elected into the role. As events moved forward from that point in time, the Gentile presence in the Messianic community grew dramatically while the Jewish leaders and worshipers of Yeshua struggled under the heartbreak of the loss of the Temple and the ejection from their land. Scant decades later, the failure of the Gentile “church” to support the Jewish revolt of Bar Koshba drove another significant wedge between the Jewish Messianic community and the body of Gentile believers.

With the Jewish population now scattered, humiliated, and fearing destruction at the hands of the Romans, the Gentile Messianics continued to secure their dominance and control of the worship of Yeshua. The self-identity of the Gentile Christians shifted from grafted-in to the root of Judaism through Abrahamic faith to the new inheritors of the Messiah, replacing Israel on a spiritual level. Origin of Alexandria and Justin Martyr were the earliest authors of this tradition and among the first to declare that the church had superseded Israel. Attached to this belief was the rise of Christian blame against the Jews for the murder of Jesus. The Jews became unworthy of their own Messiah and were pushed out of the worship of Yeshua by the Gentile disciples they had once taught and nurtured.

I previously said that I don’t have an advanced degree in religious studies, but as a published author, I do know how to do research, including delving into the history of how “the Way,” which started as a sect of Judaism inclusive of non-Jews but administered and guided by Jewish mentors who understood God and Messiah in a completely Jewish religious framework, into a newly created non-Jewish religion which found it necessary to eliminate any aspects of Judaism from its background.  In my review of the early church, I could see the early “church fathers” virtually reframe the letters of the early Jewish disciples, principally written by Paul, into words that would ultimately be used to discount and eventually all but exterminate the Jewish people.

I’m opening this blog post up for debate on the pros and cons of “fulfillment theology” and asking for those who are far wiser and much better educated and I in religious subjects to enter into the conversation. I do insist however, that this conversation remain polite and respectful. Disagreement is absolutely no excuse for undue emotionalism or any personalizing of conflict. Any apparent “attacks” on someone who differs from your point of view will not be tolerated and I, as the blog owner, reserve the right to edit or delete any offensive comments at my discretion.

This debate is specifically focused on the pros and cons of “supersessionism,” “replacement theology,” “fulfillment theology,” or whatever else you want to call it. It is NOT about One Law or Two House perspectives, so I am not inviting statements on those viewpoints to be presented here. If you find it necessary to disregard my wishes in this, your comments will be removed. Thank you.

With those disclaimers out of the way, please feel free to refer back to the full stream of comments on the “Sabbath” blog post, then return here and discuss how you support or refute my statements and Pastor Adkins’s statements. Please cite specific Biblical or other sources to support your arguments. I am asking for information, not unbridled passion.

One last thing before we begin. Eugene, you previously said:

How is lighting candles a confirmation of Jesus’ grace if that person doesn’t believe in Jesus to begin with? 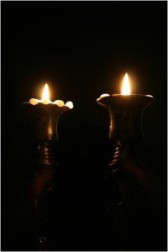 I do have faith in Jesus, as you do Eugene. Watching the lighting the Shabbos candles is a beautiful and unique way of inviting him into my home and to experience something of a preview of his return to us, may it be soon and in our days. If perhaps, your comment were meant as a remark toward my wife who is Jewish but not a believer, I can only ask that you try to consider her with the same compassion and love that God has toward His am segulah; His “wondrous and treasured people” (Exodus 19:5). I can’t tell your attitude toward Jews and thus toward my wife and children through our “text-only” conversation, but if you cannot see them with the same compassion as God does, and believe God has discounted if not completely destroyed them, then I suppose my argument has already been made for me.

With that, I look forward to everyone’s contribution now and in the days ahead. I hope to learn a lot.