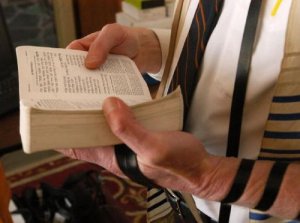 If you ever hire an architect to design a synagogue, you will need to inform him of the two-door rule: The worshipper must first enter into a vestibule that precedes the sanctuary before walking through the doors of the sanctuary itself, as verse in Proverbs goes, “Fortunate is the man who listens to me to watch by my doors day by day, to watch the doorposts of my entrances.” (Talmud Berachot 8a. Tur, Shulchan Aruch Orach Chaim, Levush 90:2. Magen Avraham ibid. Shulchan Aruch Harav 90:19.)

The first door, explains Rabbi Sholom Ber of Lubavitch in his “Booklet on Tefillah,” (Kuntres Hatefillah, siman 11) is the door in from the street. You first need to leave the confusion of the world outside and empty your mind of all worldly concerns, power down your cellphone, spend a few moments to gain calm and focus. As Rabbi Shimon ben Gamliel would say (Avot 1:17), “All my life, I grew up among the sages and I did not find anything better for a person than quietness.” That is the point of that first door, something particularly necessary in our modern, cacophonous world: You want your mind to settle down, like a bubbling brook might settle into a still pond. There, reflected in that still water, it may be possible to behold a clearer image of the universe.

I wrote Choosing a Storyteller for yesterday’s “morning mediation” and then realized that I have more control over this whole process than I previously thought.

Here’s part of the quote I pulled yesterday from Peale’s book The Power of Positive Thinking from the “prayer” chapter:

An illustration of a scientific use of prayer is the experience of two famous industrialists, whose names would be known to many readers were I permitted to mention them, who had a conference about a business and technical matter. One might think that these men would approach such a problem on a purely technical basis, and they did that and more; they also prayed about it. But they did not get a successful result. Therefore they called in a country preacher, an old friend of one of them, because, as they explained, the Bible prayer formula is, “Where two or three are gathered together in my name, there am I in the midst of them.” (Matthew 18:20) They also pointed to a further formula, namely, “If two of you shall agree on earth as touching any thing that they shall ask, it shall be done for them of my Father which is in heaven.” (Matthew 18:19)

Now, let me back up in Rabbi’s Freeman’s Guide to Jewish Prayer series and quote from the first article, Is Prayer Normal:

With this passage and other similar such statements, Maimonides makes it clear that G-d could run the universe perfectly well without our prayers. The implication is that we are the ones who need prayer—in order to connect Him to our lives.

In fact, we may be using the wrong word altogether. The English word, prayer, means to beseech, to implore, to plead for something.

There is another word, bakashah, that certainly does mean all those things. But that’s not the word we use. We use tefillah. Does tefillah really mean “prayer”?

Tefillah is etymologically related to the root word tofel—meaning reconnect or bond. 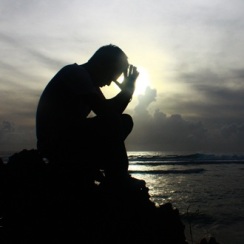 While I’m not trying to appropriate any sort of “Jewish identity marker” or make myself a pain in the neck to Jewish people, on a fundamental level, prayer is prayer, regardless of who is doing the praying. If “God so loved the world, that he gave his only Son, that whoever believes in him should not perish but have eternal life,” then certainly He desires both the Jew and the non-Jew to pray and to “bond” or “reconnect” with Him. If the first century Roman centurion Cornelius (see Acts 10) learned to pray from his Jewish mentors, I don’t think it’s so out of line for me to take what I find valuable about the Jewish prayer and adapt it for my own use.

Chapter 4 in Peale’s book is called “Try Prayer Power.” I’m willing to admit that I’ve been looking for something I’ve had access to all along. Perhaps it just needs a bit of refreshing. I am not going to “pray as a Jew” as such, but since the Jewish people have been “bonding” to God a lot longer than we Christians, on the order of thousands of years longer, maybe they have a few ideas on the subject.

During the Cuban Missile Crisis, then Attorney General Robert Kennedy ignored a threat made by Soviet Ambassador Anatoly Dobrynin and proceeded with negotiations to defuse the crisis as if he had never heard Dobrynin’s original. It was Kennedy’s setting aside of Dobrynin’s statement that allowed the Soviet Ambassador to safe face and continue to proceed to a peaceful conclusion that prevented a nuclear war (I know this is a strange metaphor, but please bear with me).

If I can somewhat apply the same principle and temporarily set aside the fact that Freeman’s series on Jewish prayer is intended only for Jews, I can imagine that it can apply to me too. Then maybe this particular series can be a story that I can use in seeking my own connection to God as a means of “cognitive restructuring.” A sort of “refactoring” of Peale’s ‘Chapter 4″ in a way that uses better metaphors.

It’s a matter of learning how to walk again. 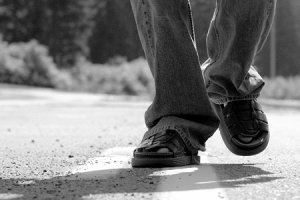 Learning to walk involves taking the first step, and then another, and then another. I’ll probably never find the “perfect” inspirational book (excepting the Bible) out there, so I’ll have to construct one of my own. I guess that’s part of the reason I created this blog series in the first place. They’re “morning mediations” that are supposed to start a person’s day. I can start out by letting each one be a meditation for me again, and then, as Meditation’s Hallway suggests, move from my morning meditation, into prayer.

When you awake in the morning, learn something to inspire you and mediate upon it, then plunge forward full of light with which to illuminate the darkness.

I have always known the storyteller I have ears to listen to. I just need to restructure the meaning for a wider focus; one that includes me. I hope nobody minds.