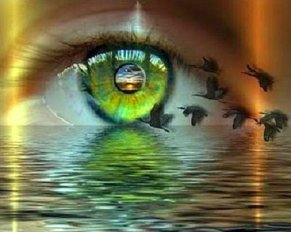 We’re talking about meditating – as per our last installment. About taking the reins of that gray matter and restructuring it for inspired living. Who’s going to take those reins? Who’s doing the restructuring? There must be some aspect of mind that transcends the gray meat and is able to look at it and say, “Naah—better off this way!” Otherwise, why would a brain care about restructuring itself – or even realize it requires restructuring?

We’ve known this for a long time. We’ve known that there is an aspect of the human being that comes wrapped with the meat and bones, while there’s another aspect that enters from beyond. That is why, writes the 14th-century commentator, Rabbeinu Bechayei, the book of Genesis tells the story of the creation of the first human being twice: once to describe the animal called homo sapiens, and then again to describe the injection of a G-dly soul into this creature — “And He blew into his nostrils the breath of life.”

So there are (at least) two persons in there: a basic human animal person, and a G-dly person. Two big roommates in a small human frame – with very different tastes in interior decorating. Which can get very ugly.

In yesterday’s morning meditation, I presented the concept of Jewish, or more specifically, Chasidic meditation as a means of preparing for entry into prayer. The idea is that, before climbing the ladder of Jacob, so to speak, in order to enter into the presence of the King, you prepare your mind and spirit through meditating on God, His wonders, His works, His meaning. You immerse yourself in God as one steps into a pool and submerges into the depths of His mystery and His identity. Then you emerge and are ready to stand before the Throne.

However, this last entry into Rabbi Freeman’s series on Jewish prayer expands and transforms the meaning of meditation to include the internal restructuring of the person. This is actually my primary goal at the moment; a personal restructuring of my understanding of myself and life and how I can choose to interpret events differently than I have in the past. From the Chasidic point of view, the restructuring involves the transaction between the purely human “meat animal” of a person, and that part of us God breathed into our bodies.

Here’s the really exciting part for me.

So, to put this all together, we are describing meditation as a form of negotiations between a non-meat-related soul that is basically G-d breathing inside, principally concerned with going back to where it came from, and a human brain that comes wrapped in gray and white meat and is principally concerned with, well, meat kinds of things – eating, sleeping, procreating, collecting toys, and getting lots of people to say what a wonderful human being he is.

A daunting task. What can the G-dly soul possibly say that might impress this human person?

Well, first off, you need some background data on your particular human animal. What impresses it? What fascinates it? What’s its language?

This is just amazing. Not only does Rabbi Freeman speak of restructuring, which is foremost on my mind and the thrust of my current desires, but he introduces “language” or metaphor as the means by which we learn how to restructure. There’s a reason why Rabbi Freeman is one of my favorite storytellers, particularly in the area of spirituality, God, and wonder.

The Rabbi goes on to explain that one of his favorite “languages” is technology and programming, so he tends to allow this theme to act as the conduit for communications between his “Godly soul” and his “Animal soul.” We all use different languages for this purpose. In a comment on yesterday’s morning meditation, my friend Joe said:

Practicing when hiking in the mountains, breathing God in and out with each step opens up an awareness of every example of Creation’s beauty I pass on the trail, because I am not off thinking about the future.

I thought of that this morning as I was working out on the Elliptical machine at the gym. I’m trying to improve my cardiac recovery after an aerobic workout and, during the five-minute cooldown, as I was slowing my pace and had the machine set to a lesser intensity, I closed my eyes and spent some time breathing God in and out as I allowed my breathing to slow and deepen. I pondered the wonders of God in ways you might not imagine. I found my thoughts centering around Joe’s recent cancer surgery and how well it went and then around his wife Heidi, who continues to undergo aggressive chemotherapy. I found myself asking where is the miracle of God in Heidi’s suffering? The answer is the wonder of God she has in Joe. Whatever Heidi faces in her battle with cancer, she is not alone. She has God and she has a husband with a Godly soul.

I opened my eyes and my heart rate was lower than I had previously achieved at the end of a workout…not by much, but it was something.

That may not be particularly impressive, but there is something important in what we talk to ourselves about before we actually talk to God. Often, I enter into the presence of God like a raw nerve with this need and that, yelling and screaming about the injustices of the world, and the worry, and the anxiety, and the tragedy of the world, including my world. I’ve heard Pastors and motivational speakers talk about “giving it all to Jesus” and “taking charge of your thoughts” and “letting go of your worries,” but no one ever says how this is to be done. Or if they describe a method, it doesn’t seem to be one that I find particularly workable. 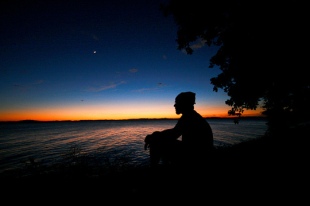 But then, we all respond differently to different languages. I don’t “understand” a lot of the languages being spoken in the religious and spiritual worlds and thus, they mean little or nothing to me. And then there’s the language that’s required to conduct the internal dialog between that which is animal and that which is spiritual within me.

Everyone else’s “good advice” doesn’t work if they’re talking in the wrong language and if the metaphors don’t make a connection (which is why motivational football or fishing stories fall flat with me). Restructuring requires that you have active control over selecting your own language and metaphors, even if they don’t mean anything to anyone else. Find your own storytellers who speak that language and let them speak to you. Take all that and let it be your own voice as you speak to yourself. Then you will have a voice in which you can better speak to God. Not a voice of panic and desperation, but one that, after still and quiet contemplation upon God’s wonders, can speak in small stillness, in praise, in glory, in humility, in a thousand colors and shades that describe who you are, who you are becoming, and who you are perfectly within Him.

There are better days and there are worse days. But on the better days, I can reach that place in the antechamber that exists between the world and God’s Throne and still myself. Then, in a supernatural moment of peace, I reach out for the first rung of the ladder which sits at the bottom of the abyss, and the surroundings begin to brighten. I take the first step in my climb, breathing in God and breathing Him out. The door to the Heavenly court begins to open, I find my mouth, and I must speak.

“Our Father Who is in Heaven…”

“Faith believes that which it is told, because it wants to believe.

Intellect believes that which it understands, because it wants to attain understanding.

Wisdom believes that which is true, because it is true.

It doesn’t have to fit that which faith wishes to believe. It doesn’t await the approval of intellect to say, “This can be understood.”

Wisdom is clear vision, the power to see “that which is” without attempting to fit it into any mold. Wisdom, therefore, is the only channel by which an Infinite G-d may enter.”

This isn’t the end. It’s only the beginning.