Being caught up in the fresh wind of God’s activity among the Gentiles, none of the apostles or the other Jewish believers immediately attempted to formulate a theology of Gentile identity. They just rejoiced. As we seek to formulate—or perhaps more accurately, to rediscover—that same theology today, we must remember to keep our priorities straight. We must praise God that his activity is universal and that he gives the same Holy Spirit to all who believe. But our questions still haven’t been answered, and neither had the questions of the believing Jews in Jerusalem. Before too long, two elements emerged. One group, mostly Pharisees who had accepted Christ, did not recognize the eschatological significance of the miraculous conversion of Cornelius. They argued that these Gentile believers must proselytize; they must convert to Judaism. Others, though, dissented. One of them was Sha’ul, also known as Paul, who had just come back from a mission trip to Asia Minor (known today as Turkey). He, like Peter, had witnessed God working in the lives of Gentiles. He reported that many Gentiles had come to faith in Jesus. We know from Paul’s epistles that he immediately forbade these Gentile converts from worshipping idols. They could no longer be identified as pagans. So how were they to be identified?

While the “circumcision faction” —probably a majority— answered this question by requiring conversion to Judaism, Paul refused this answer to the Gentile problem. This conflict was resolved in Acts 15 at what is now called the Jerusalem Council. First, Paul’s opponents made their case. Then Peter got up and told his story. Then Paul and Barnabas told theirs. They didn’t give a theological reason for their position. They just told their stories. For them, that was enough. They had seen firsthand how God had miraculously changed the hearts of the Gentiles who had attached themselves to Jesus. It was clear enough to Peter, Paul, and Barnabas that the Gentiles didn’t need another status change. They had been accepted just as they were.

It was James, Jesus’ brother, who gave a theological voice to the position of Peter and Paul. He quoted Amos 9:11–12: “‘After this I will return and rebuild David’s fallen tent. Its ruins I will rebuild, and I will restore it, that the rest of mankind may seek the Lord, even all the Gentiles who bear my name,’ says the Lord, who does these things, things known from long ago.” James reasoned that the wave of Gentiles who were coming to faith were a fulfillment of biblical prophecy. At this juncture, with James’s ruling, it became halachah — law — within the early church that Gentiles did not have to become Jews. Not only that, but their identity was just as valid and as valuable as that of the Jews. They too had an eschatological significance, they too were a fulfillment of prophecy, and they too were called by God to be part of the body of believers, just as the Jews were.

At the Jerusalem Council, then, one aspect of the identity of the Gentile believers had been confirmed. They weren’t Jews, and since the term “Jew” and “Israelite” had been synonymous since the Captivity, they couldn’t be called “Israelites” either. They were still Gentiles. But in the first century, the terms “Gentile” and “pagan” were synonymous.

Knowing this, many Two-House proponents are offended at being called “Gentiles.” To them, the terms “Gentile” and “pagan” are still synonymous today. They believe that Israel constitutes the only people of God. The negative connotation of the word goy in rabbinic literature only serves to confirm this sentiment. Yet the New Testament is clear that believing Gentiles are still called Gentiles. They remained members of the ethnē, the nations, and the apostles addressed them as such.

Yet non-idol-worshipping Gentiles were virtually unheard of. There was no precedent. New words and concepts had to be created to explain this new phenomenon, or else familiar concepts had to be adapted. The latter route is the one the New Testament authors took in identifying the Gentile converts, their place in God’s plan, and their obligations to God and to the Jewish people.

-From an unpublished book I can’t talk about yet 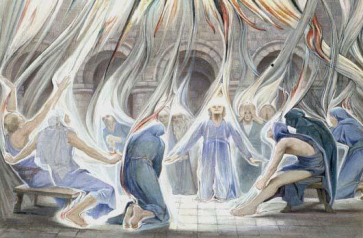 In my various roles as an author, editor, and reviewer, I occasionally receive advance copies of books that I really can’t discuss until they are published or near their publication dates. Nevertheless, as I was reading this one, I came across the above quoted section of a particular chapter and was rather taken by the content. The viewpoint of the author (who must remain nameless for now) is very much like mine, and what is written speaks to not only what I understand to be true for me, but also answers a number of my questions about who the Gentile disciples of the Master were in the first century…and maybe who they…who we really are today.

We don’t really think about it much now from a “church” point of view, but just how did the original Jewish Apostles of the Jewish Messiah see the newly-minted Gentile disciples? What sort of plan was there (if any) to integrate them into the larger Jewish faith in the God of Abraham, Isaac, and Jacob? When a first century idol worshiper accepted being a disciple of Jesus of Nazereth, did they stop being a “Gentile” and turn into something else? If so, what did they turn into…a Jew?

Paul says no, otherwise, he wouldn’t have had any objections to Gentiles (males, that is) becoming circumcised (see Galatians 2) and actually converting to Judaism, but if the Gentiles weren’t “spiritual Jews,” what were they? More to the point, who are we now?

(I know you’re thinking “we’re Christians,” but that term didn’t exist back then, at least not as it’s defined today. Who the new, non-Jewish disciples were was a completely unsettled matter in the beginning. So who were they, and who are we?)

That, as they used to say, is the $64,000 question. But why am I even bothering to ask it, especially right now?

Another round of the “One Law” vs. “Bilateral Ecclesiology” debate has reared its ugly head, this time starting in Derek Leman’s blog post We’re Not All the Same and then continuing in Comfort, Agitation, Breakthrough (I say “raised its ugly head” not to disparage Derek’s writing or choice of themes, but just to describe the rather repetitive nature of said-discussions and their lack of concrete resolution). The comments sections of Derek’s blog posts were fresh in my mind as I was reading the text from the above-quoted book and I couldn’t let the matter go, much as I’d like to.

Besides my usual stance that non-Jews claiming obligation to a Jewish lifestyle that (apart from disdaining Mishnah, Gemara, and Talmud) mirrors actual Jewish observance dilutes and threatens to eliminate Jewish distinction from the nations, I realized there was another serious matter going on.

When a Gentile Christian with an attraction to Jewish observance concludes that the same 613 commandments that the Creator gave to the Israelites at Sinai are also assigned to any non-Jew who has accepted discipleship under the Jewish Messiah, then they are saying that every Christian is obligated to a Torah lifestyle. That means, astonishingly enough, that any Christian who does not observe the entire “yoke of Torah” is sinning!

And yet, the vast majority of Christians in the church have absolutely the opposite understanding of their obligations to God.

It’s one thing for a “Messianic Gentile” to say that, as a matter of conscience and personal commitment, they have taken on board behaviors such as refraining from eating Leviticus 11 “treif,” praying with a siddur, and wearing tzitzit, but it’s another thing entirely to say that, according to their own understanding of the Bible, they declare that all believers, Gentile and Jew, must perform the same mitzvot!

Particularly when, based on the rather lengthy block of text I quoted at the start of this blog post, the Jewish disciples were still trying to figure out what to do with the Gentile disciples back when all this first got started. Full Torah obligation for all non-Jewish believers certainly wasn’t the obvious conclusion at which the Jewish Apostles arrived. In fact, James said that it seemed not only good to the Council, but to the Holy Spirit as well (Acts 15:28), that the full Torah lifestyle not be dumped upon the Gentiles as a whole. Further, the non-Jewish disciples not only didn’t mind not being obligated to the weight of Torah, they were actually happy about it.

So when they were sent off, they went down to Antioch, and having gathered the congregation together, they delivered the letter. And when they had read it, they rejoiced because of its encouragement. And Judas and Silas, who were themselves prophets, encouraged and strengthened the brothers with many words. –Acts 15:30-32 (ESV)

Maybe the movement to bring the Gentiles into discipleship with the Jewish Messiah never reached a point where matters of identity and practice were resolved before the destruction of the Temple and the final, tragic exile of the majority of Jews from their homeland. Those events paved the way for a “Gentile takeover” of this Messianic Jewish sect (which would eventually evolve into what we call “Christianity” today), such that theology and history would be re-written to remove Judaism and Jews from devotion to Jesus as the Jewish Messiah.

For twenty centuries, the original vision of Paul and Peter was lost or at least significantly distorted, and only in the last few decades has their been a modern attempt at restoration.

But now we have a new problem. Originally, it was up to the Jewish sect administered by James from Jerusalem to apply a set of standards to the non-Jewish disciples, defining identity and limits to their religious practice. Today, the cart has come before the horse, so to speak. The non-Jewish disciples are doing their own defining and identifying, and to that end, summarily ignoring or disagreeing with how Jews define themselves, their participation in the Messiah, and the mechanism for practice of non-Jewish attachment to the God of Israel.

It was Paul who attempted to resolve the “Gentile identity problem” by bringing Abraham into the picture, but that story exceeds the scope of this “extra meditation”. I only want to point out that we haven’t come to the point where we fully understand how a non-Jewish person is supposed to relate to Jewish disciples of the Jewish Messiah, or for that matter, how (or if) our religious practice relates to Judaism. I certainly think that mainstream Christianity has missed a few things along the way, but I think that many non-Jews in the Hebrew Roots movement have “over-corrected” by jumping from a “no-Law” position to a “the Torah is totally mine” stance.

Who are we among the nations who have our identity in Christ? The Bible has a lot to say about the answer, but it doesn’t say everything, at least in a language we can understand. Once the book that has inspired this missive is available to be discussed openly, I hope to write more about this topic.

Until then, let us conclude that each of us is making personal decisions about how we choose to practice our faith relative to how “Jewish” we behave. We just don’t know how or if those decisions mesh with the intentions and desires of God for the people of the nations of the world. We certainly don’t know enough to walk into a church and condemn everyone present for not wearing kippot and tallitot.

I wrote a Part 2 to this article. I hope you’ll read it.