Our Sages ask: “What is Mashiach’s name?” and reply “The leper of the House of Rebbi.” This is very difficult to understand. Mashiach will initiate the Redemption, and is associated with the pinnacle of life and vitality. How can his name be linked with leprosy (tzaraas), which is identified with death and exile?

This difficulty can be resolved based on the statements of Likkutei Torah, which explain that a person affected by tzaraas will be:

A man of great stature, of consummate perfection…. Although such a person’s conduct is desirable, and he has corrected everything,… it is still possible that on the flesh of his skin there will be lower levels on which evil has not been refined. This will result in physical signs on his flesh, in a way which transcends the natural order….

Since the filth on the periphery of his garments has not been refined, therefore [blemishes] appear on his skin…. Moreover, these blemishes reflect very high levels, as indicated by the fact that they are not considered impure until they have been designated as such by a priest.

The passage implies that there are sublime spiritual influences which, because of the lack of appropriate vessels (as evidenced by the “filth on the periphery”), can produce negative effects. For when powerful energy is released without being harnessed, it can cause injury. This is the reason for the tzaraas with which Mashiach is afflicted.

In Hebrew, leprosy is given the unlikely name nega – literally “a touch” – which means a leper is someone touched by God.

In light of this, when the names of Messiah are discussed in the tractate Sanhedrin of the Talmud, each school names Messiah after its own Rabbi. So for example, to the students of Yanai, Messiah will be called Yinnon (Psalm 72:17; the English says “shall continue”) and to the students of Shila, Messiah’s name is Shiloh (Genesis 49:10). In the same way, Messiah is called Leper after Rabbi Yehudah Hanasi, who either suffered greatly or was in fact a leper. To support their claim that the Messiah is called Chivra, the students of Rabbi Yehudah say, “His name is Chivera after the house of Rabbi, since it says, ‘We esteemed Him stricken, smitten by God, and afflicted'” (b.Sanhedrin 98b).

-Tsvi Sadan
from the chapter “Leper,” pp86-87
The Concealed Light

The Jewish people as a whole are compared to a human body. This applies within every generation, and also to the entire nation throughout history. All Jews those of the past, present, and future are part of a single organic whole.

This is to be compared to something I just read:

Jews have never found it easy to accept each other. Whether Ashkenaz or Sephard, religious or secular, liberal or conservative, Jews of all stripes have had a difficult time tolerating those with whom they differ. Of course, this isn’t unique to Jews. Human nature compels members of any group to focus on all the differences that exist between one another. Nevertheless, a Jew is a Jew – regardless of the additional descriptive words. Although it sounds oxymoronic, the Jewish people are not a monolithic group and yet we are one. Go figure.

-Asher
“We Are One”
Lev Echad

My friend Yahnatan on his blog Gathering Sparks pointed me (well, anyone who has read his blog post, actually) to a review of Daniel Boyarin’s book The Jewish Gospels written by New Testament scholar Joel Willitts. It says in part:

Now Boyarin’s chapter is quite dense, although accessible. His position is based on a view that Daniel 7 is “a house divided against itself” because it leaves a reader with contrary information: the Son of Man is both a second divine figure and a collective earthly figure, the faithful of Israel.

Setting aside any interpretation of the Deity of the Messiah in the Willitts blog post, we see that in this interpretation and in traditional Judaism, the Messiah and Israel are virtually interchangeable or perhaps inexorably intertwined. Messiah is Israel.

And Israel is touched by God and Israel suffers.

No, I’m not necessarily talking about the modern, geographical and national entity called the nation of Israel (though I suppose I could say a few words on that subject) but rather the historical, spiritual, mystical, people/group/nation of Israel who were forged at the foot of that fiery anvil we call Sinai, and who throughout the panorama of time, have continued to burn at the touch of God while awaiting the comfort and rescue of the Messiah (not unlike Shadrach, Meshach, and Abednego…see Daniel 3), may he come soon and in our day.

But what does that have to do with Christians?

Seen from the perspective of everything I’ve said so far, that’s a hard question to answer and one that is very uncomfortable for the church. I can see why supersessionism exists in the church and, within the Hebrew Roots movement, I can see why the non-Jews are desperate to lay claim to Torah “obligation” and “spiritual Judaism,” if only to be able to have a share in the Jewish King; the Son of Man, who is also Chivra; “touched by God.”

We want to be “touched by God” too, which is strange, since it means that we among the nations, the Gentile disciples of Jesus, must also suffer.

…and if children, then heirs – heirs of God and fellow heirs with Christ, provided we suffer with him in order that we may also be glorified with him. For I consider that the sufferings of this present time are not worth comparing with the glory that is to be revealed to us. –Romans 8:17-18 (ESV)

We see from the tale in Matthew 20 that the mother of the sons of Zebedee asked that her two sons sit on the left hand and on the right of Jesus in his kingdom, but this was not an easy request to grant:

Then the mother of the sons of Zebedee came up to him with her sons, and kneeling before him she asked him for something. And he said to her, “What do you want?” She said to him, “Say that these two sons of mine are to sit, one at your right hand and one at your left, in your kingdom.” Jesus answered, “You do not know what you are asking. Are you able to drink the cup that I am to drink?” They said to him, “We are able.” He said to them, “You will drink my cup, but to sit at my right hand and at my left is not mine to grant, but it is for those for whom it has been prepared by my Father.” And when the ten heard it, they were indignant at the two brothers. But Jesus called them to him and said, “You know that the rulers of the Gentiles lord it over them, and their great ones exercise authority over them. It shall not be so among you. But whoever would be great among you must be your servant, and whoever would be first among you must be your slave, even as the Son of Man came not to be served but to serve, and to give his life as a ransom for many.” –Matthew 20:20-28 (ESV)

As the old saying goes, “be careful what you ask for…you just may get it.”

Tsvi Sadan’s description of the Messiah as a leper in his book (pg 87) tells us what to expect when we, his disciples, share the cup of the Messiah:

“Leper Messiah” is found in Jewish legends such as the one in the above Talmudic passage. This legend describes an encounter of Rabbi Joshua ben Levi, a student of Shimon bar Yochai, with Messiah. On a quest to find out when Messiah would come, Rabbi Joshua ends up in Rome, where he sees one leper amongst the poor and the sick who is tying and untying his bandages (b.Sanhedrin 98a). Rabbi Joshua identifies this leper as Messiah and asks him when he will come. Messiah answers him with a single word “Today!” Waiting in vain till the day was over, Rabbi Joshua complains to his teacher that Messiah lied to him. Rabbi Shimon replies to his disappointed student: “[He will only come] today, if you will hear His voice” (Psalm 95:7).

In some sense, because he is Israel, the Messiah suffers because his people suffer. If we among the nations choose to be grafted in, while it doesn’t make us inheritors of Sinai, we must agree to drink from the cup of the Messiah and to suffer with him and to bear the burden of Israel’s suffering as well. This is why part of our duty as disciples is to support and uplift the Jewish people and to affirm the Jewish right to their national and Biblical homeland: Israel.

I find it ironic and all too human that when some among the Gentiles demand the “right” to be “obligated” to the Torah and to share in a Jewish lifestyle (but without making the actual commitment to be a Jew), they focus on the honor and glory and joy of Judaism; the lighting of candles on Shabbos, an aliyah to the bimah to read Torah, the wearing of tzitzit, and so forth. The stark reality is that anyone who chooses to be called by the name of Christ, whether you call yourself “Christian” or “Hebraic” or “Messianic,” is called to be a leper, to live among lepers, to tie and untie the bandages of the sick and dying…and to be sick and dying. The world didn’t esteem our Master, nor if we are really his disciples, will it esteem us.

Are you sure you are ready to drink from that cup? 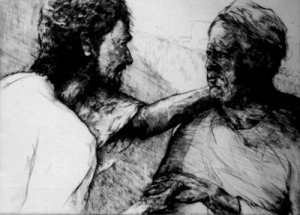 Whenever we suffer for His sake and yet in our suffering, live among others who are hurt and sick and dying, and we minister to them, not thinking of ourselves, but serve them for their sake and God’s, then the Messiah has come, and he is coming right now, and he will come tomorrow…because he lives in us.

Yes, someday he will come with the clouds of heaven, in might and power, as one like the Son of Man (Daniel 7:13) and he will heal a broken world and his suffering people, but if we are who we say we are, we will not idly wait for him. We will drink his cup, take up our cross (Luke 9:23), and follow him. We will allow God to touch us and we will be like lepers. If we aren’t willing to suffer with him and with Israel, as Paul said in his letter to the Romans, then we also will not be glorified with him, and all of our words are in vain.

One thought on “Tazria-Metzora: Suffering at the Touch of God”