“Our fathers had the tent of witness in the wilderness, just as he who spoke to Moses directed him to make it, according to the pattern that he had seen. Our fathers in turn brought it in with Joshua when they dispossessed the nations that God drove out before our fathers. So it was until the days of David, who found favor in the sight of God and asked to find a dwelling place for the God of Jacob. But it was Solomon who built a house for him. Yet the Most High does not dwell in houses made by hands, as the prophet says,

“‘Heaven is my throne,
and the earth is my footstool.
What kind of house will you build for me, says the Lord,
or what is the place of my rest?
Did not my hand make all these things?’”

I don’t know. For the most part, what Pastor Randy said about this portion of Stephen’s defense before the Sanhedrin was supportive of the Tabernacle and the later Temples, including the idea that Ezekiel’s temple is literal and not figurative, and will someday exist in Jerusalem.

On the other hand, I’m bothered by the “either/or” concept of “Israel’s history has been characterized by limiting worship to a sacred placed, rather than a sacred person.” I think it would be valid to say that there were times in Israel’s history when they were faithless and even when offering sacrifices in the Temple, did so only to pay “lip service” to the commandments, while their hearts were far from God. But I don’t think that Israel’s temple service was always without value. Point 2 above seems to imply that rather than the Temple, the Jewish people should always have been focused on the Messiah, but didn’t God command Israel to build the Tabernacle? Didn’t the Shekhinah inhabit first the Tabernacle (Exodus 40:34-38) and later Solomon’s Temple (1 Kings 8:10-12)?

Did Jesus replace the Temple? But then Pastor believes Ezekiel’s Temple will be built, so can he believe that?

The title of the sermon was something like “Putting God in a Box.” I think the idea was that it’s a bad thing to put limits on God in any sense, but I never really got the impression that throughout the history of the Jewish people, anyone actually thought God was confined to the interior of the Mishkan (Tabernacle) or Temple. The Divine Presence, what most Christian Bibles translate as “the Glory of God,” was understood as a manifestation of God’s Presence without being perceived as anything like His totality. This is where understanding a little bit about Jewish mysticism and concepts such as the Ein Sof and Shekhinah would be helpful.

In Sunday school class, I did hear one gentlemen using examples of the specific type of clothing worn by Orthodox Jews and praying at the “wailing wall” (Kotel) as illustrations of Jews “putting God in a box.” It was one of the few times during class that I didn’t speak up, mainly because it would have taken too long to try to explain why those practices aren’t necessarily bad things (for Jews, anyway).

I was also a little disturbed about where I would lead such conversation if I allowed it to go down the predictable path. At the beginning of services, Pastor Randy reminded everyone that he would be leading a tour of Israel this coming spring and that “affordable prices” for airline tickets needed to be purchased by the end of this month. He was extremely supportive of Israel’s efforts in defending itself during the current crisis, and said that we should not let ourselves be put off in planning to visit in the spring because of what is happening right now.

As he went through the slide show of where the tour group would be visiting, the last place is to be Jerusalem, including stopping at the Kotel. How was I supposed to tell this fellow in Sunday school that when I saw the slides of the old city, that I have always desired to offer prayers to God at the Kotel? What would he say? How much more trouble would I stir up than I already had?

I know I don’t fit in to a Jewish community. I’m not Jewish and I’m not going act in such a way that pretends otherwise. But while I say that I’m a Christian because it’s the closest approximation of an accurate description of my faith, I don’t believe a Jewish devotion to the House of Prayer that God Himself requested and required of the Jewish people is a vain and empty effort, even relative to the person and power of the Jewish Messiah King.

And I don’t believe that Jews who choose to observe the mitzvot by a certain way of dress, or who honor their Creator by praying at the Kotel is “putting God in a box.”

Am I just looking for excuses for not going back to church? Maybe. I’ve already concluded that this particular church is about the closest I’ll ever come to finding what I’m looking for within the Christian world. If I blow it here, I’ve blown it completely. I knew I’d never find perfection, but then, what did I expect?

I just don’t know if I can agree with how Stephen’s defense is being interpreted. More from last Sunday’s study notes:

Granted, Stephen was limiting his accusation to the Sanhedrin (as opposed to leveling it toward all Jews everywhere) in turning the accusations around to apply them to his accusers, but did he not defend the Temple, the Law, and Moses as well as the Messiah?

What am I doing here?

For the most part they were willing to support the state and to partake of the cultural bounty of the Hellenistic world, but they were unwilling to surrender their identity. They wished to “belong” but at the same time to remain distinct. Support for the state was not to be confused with the abnegation of nationalist dreams. Hellenization was not to be confused with assimilation. This tension is also evident in the social relations between Jews and gentiles. 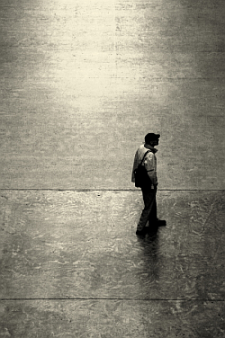 That’s not really describing me, but when I read this paragraph from Cohen’s book, I couldn’t help but think of my attempts at “belonging” in my current church context. However, at the same time do I want to remain distinct? Distinct as what?

I’ve described both Judaism and Christianity as cultures in addition to “faiths” (for lack of a better word). Judaism is notoriously difficult to define since it is a nation, a people, a faith, a culture, and an ethnicity, all rolled into one thing. Worse than that, Judaism encompasses multiple cultural and ethnic elements as well as variations on religious practices, but at its core, Jews will always be part of a single nation; Israel, because God has so ordained it.

By comparison, what is Christianity? It is primarily a religion, but it encompasses many “Christianities” and it has many different cultural and theological expressions. In the middle of all that, what identity do I have among them, and of what they teach, how much can I believe?