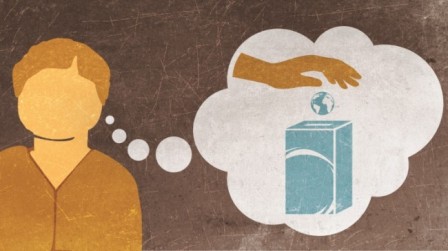 The Code of Jewish Law (YD 248) states: “Every person is obligated to give tzedakah, even the poor who themselves are recipients thereof.” Maimonides writes that nobody ever became poor from giving tzedakah. In fact, the Talmud (Ta’anit 9a) states that when you give Ma’aser properly, it actually earns you additional wealth. “Which Charities to Give to?”

-From the Ask the Rabbi series
Aish.com

The Tzemach Tzedek writes: The love expressed in “Beside You I wish for nothing,” (Tehillim 73:25) means that one should desire nothing other than G-d, not even “Heaven” or “earth” i.e. Higher Gan Eden and Lower Gan Eden, for these were created with a mere yud…. The love is to be directed to Him alone, to His very Being and Essence. This was actually expressed by my master and teacher (the Alter Rebbe) when he was in a state of d’veikut and he exclaimed as follows: I want nothing at all! I don’t want Your gan eden, I don’t want Your olam haba… I want nothing but You alone.

In yesterday’s morning meditation I mentioned that Christian financial adviser James W. Rickard was a special guest speaker last Sunday at the church I attend. As I was listening to what he was saying (the vast majority of which I was quite familiar with), I couldn’t help but think of how “Jewish” it sounded. For instance, he talked about being content with what one has and quoted New Testament scripture to back it up (I don’t have my notes handy, so I can’t tell you the exact verses). And yet, how much does that echo the sages?

Of course, Rickard’s “source material” is all Jewish (though he probably doesn’t think of it in those terms) so I guess it shouldn’t be surprising that his financial advice and comments on charity should sound Jewish as well. For instance, he also said that the Bible does support God providing for us when we give to charity, but unlike those folks who preach a prosperity theology, he didn’t say that God would automatically return material goods and money to us in exchange for our generous giving to the church. He said that God could provide many spiritual gifts such as the ability to show abundant grace, mercy, compassion, courage, and so forth. In fact, Rickard didn’t have many nice things to say about some “Preachers” who urge their audiences to send in their “seed money” with the promise that those folks who do will become wealthy materially. In that scenario, usually the only one to become rich is the Preacher collecting the money.

But you can see that giving is a value that is shared by both Jews and Christians and that even those people who have very little can still provide something to those who have even less. It’s so hard to even think about giving when we’re in the middle of tough financial times. It seems this “recession” or whatever it is, has lasted longer than other, similar recessions of the past 20 or 30 or 40 years or so. When times are tough, the natural tendency is to reduce spending and to try to save up. 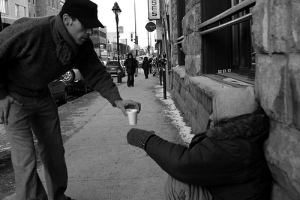 OK, Americans are addicted to credit card debt, but imagine instead of being able to use a credit card, you have to hand over cold, hard cash. Now, you’ll see the reluctance to part with money that is “real” and not just a bunch of digital information traveling over a network. If all you had was cash, you’d want to save.

The simple reason I believe all people should give charity is that we are put here to serve God. Even an atheist may serve God unknowingly by giving to charity or providing some kindness to the poor and disadvantaged. If we wait for someone else to do it or for God to provide some sort of miracle to help the needy, we may miss out on the fact that God created you and me to be “the miracle.”

Lead a supernatural life and G‑d will provide the miracles. -Rabbi Tzvi Freeman “Be a Miracle” Based on letters and talks of the Rebbe Rabbi M. M. Schneerson Chabad.org

What is a supernatural life? Perhaps one composed not only of “practical” or “common sense” but one that also utilizes faith and trust in God as its tools. It’s expecting God to be more faithful to us than we are to Him, and if we’re faithful, even within the bounds of human limitation, He is certain to be abundantly faithful. This doesn’t mean spending ourselves into debt, even for the sake of charity, but it does mean trusting that investing in another human being is not a waste of resources, nor will it cause us to suffer loss. No, you can’t give five bucks to every panhandler you encounter, nor can you write five dollar cheques to each and every charity that mails or emails you a request, but you can find a particular need and choose to satisfy it.

Many people will spend themselves into debt to satisfy the “requirement” of Christmas, with all of its gift giving, social obligations, and so forth. If instead, you took a sizeable sum of the money you would otherwise spend on gifts that people probably don’t need (still gift them if you must, but it doesn’t have to be extravagant) and bought food for the local food bank, purchased and donated clothing and blankets to a homeless shelter, or donated funds to a worthy cause in the name of a loved one, how much more would your giving really mean? 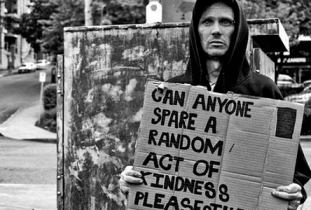 If you are a person of faith and trust, then God will allow you to do what He considers good, but have a care. If you’re giving in order to cause God to give back to you, then your motives are shot through with holes. True, the needy will still be provided for, but you may be cheating yourself out of drawing nearer to God if what you want from Him is dollars and cents. If December seems too much like the stereotypic month to give for the sake of the Christian holiday, there’s no law that says you can’t give in January or in some other month. People get hungry and need shelter every day of the week, fifty-two weeks out of the year. And God is always there.

To a fool, that which cannot be explained cannot exist. The wise man knows that existence itself cannot be explained. -Rabbi Tzvi Freeman “The Inexplicable” Based on letters and talks of the Rebbe Rabbi M. M. Schneerson Chabad.org