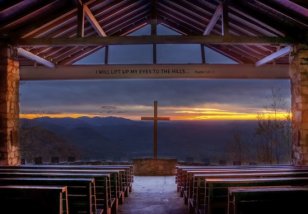 I have seen so much good come out of the church I am in. Depending on how far you want to stretch the idiom, I have seen “the blind see, the lame walk, the lepers are cured, the deaf hear, the dead are raised to life, and the Good News is being preached to the poor.”

Several families come here now that used to be part of tiny Hebrew Roots congregations. No one has found that they had to compromise their level of observance to go to church here. We don’t even really stand out all that much. Anything we wanted to do – starting chavurot, starting Torah study groups, keeping Sabbath and dietary laws, whatever – we could do and still come here and live under the umbrella of Christianity. Sunday worship? Of course. Come on, Shacharis is every morning. It’s not like you can take a day off.

-Pastor Jacob Fronczak
“Why I Go to Church”
Hope Abbey

I decided that I needed to review Jacob’s blog post, almost a year old now, to help bolster my own commitment (which, if you read yesterday’s extra meditation, you know is flagging). It helped, but only a little. Jacob was already well-integrated into his church and into the church culture in general as he developed a “Hebraic awareness” (for lack of a better term). I still feel like a fish out of water, desperately searching for a pond, a tide pool, or even a wee bucket of the wet stuff to hop into for the sake of survival.

After originally reading Jacob’s blog post, I responded with one of my own called Why I Don’t Go To Church. Obviously, a few things have changed since I wrote it. Of course, when I wrote my blog post last January, one of my primary concerns about returning to the church was “supersessionism.”

I admit to living with a certain amount of apprehension that if I ever started attending a church again, someone, a Pastor or Bible Teacher or just one of the parishioners, would spout off something about the church replacing Jews. Then I’d feel my blood pressure rise along with my temper, and I’d either just walk out, or I tell that person what I thought of their ill-considered “theology” (and then walk out or be thrown out).

Not that it would really be their fault. After all, the church has been teaching supersessionism as Biblical “fact” ever since the days of the early Gentile “church fathers.” That still doesn’t make it right nor does it mean I have to tolerate a way of understanding the New Testament that requires Judaism and every living, breathing Jew (including my wife and three children) to be deleted from religious, spiritual, and historical significance, not to mention permanently removing them from God’s love and, in at least a historical sense, removing the Jews from their very lives.

But none of that has happened. I haven’t encountered a single statement denigrating Judaism or Jewish people. I think some people are a little fuzzy on whether or not there’ll be a third Temple, and one gentleman made some statements regarding the specific clothing worn by Orthodox Jews and praying at the Kotel as “putting God in a box,” but by and large, active anti-Jewish and anti-Israel attitudes never appeared.

Jacob mentioned some of the concerns people have had that have resulted in them leaving the church.

I had some unpleasant experiences in the first church I attended as a Christian, but that was some time ago. There were also a lot of really nice folks who attended that church at that time. However, that church isn’t the church I attend now, so my past experiences really don’t apply. I’ve heard all kinds of stories about the “bad stuff” that’s happened to some people in some churches, but it really depends on the people and the churches involved and after all, as Jacob says, communal life isn’t always a bowl of cherries. 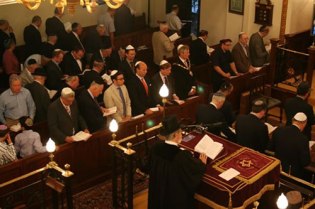 That goes for synagogue life, and life in just about any group of religious people or just people in general. Your religious tradition or whatever variant movement you are attached to probably won’t see much of a difference. The fellow I had coffee with last Sunday afternoon and his wife have been “burned” by “the church” before, but they’ve been attending a church in our community for the past four years with apparently good results. The people at their church seem to be everything I’d ever want in and expect out of Christians as far as generosity, kindness, and “tzedakah.” The church community can be very good.

More recently, I’ve been vocal about the good the church does in the environment around us and in the entire world. It’s not so much the church that’s at issue, it’s just being “me” in church and trying to get used to the church venue and context.

I still feel purposeless, useless, and aimless at church. I don’t look forward to simply attending the service and then sitting in Sunday school for an hour before going back home. It’s not that I am concerned about “not getting fed,” which seems to be a complaint I’ve heard from other Christians about other churches over the years, it’s about lack of connectedness. I’ve gone back to church to try to fulfill a Biblical (Hebrews 10:25) or Christian expectation for community, it would be nice to actually have some “community.”

In his defense of the church, Jacob wrote:

God forbid that I should disparage the Internet as a means of communication; the irony would be a bit sickening. But realistically, all the activity out here is nothing – nothing! – compared to what is going on in real churches, with real people talking face to face. Real, honest dialogue with other people who bear God’s image and are trying just as hard as we are to understand and interpret the Bible.

The Internet is an amazing way to communicate information. However it is of extremely limited value in building relationships, real relationships with trust and accountability and blood and tears and the things that make us human. And it is in the context of these relationships that people change, minds change, spiritual growth happens.

Apparently, that is yet to come and the potential for that sort of relationship and dialogue is just about the only thing that’s keeping me where I am for the moment. I keep expecting someone to kick me out because I don’t celebrate Christmas (and fortunately, no one has asked what I’m doing for Christmas yet) or because I’m not doing something besides occupying space (make a suggestion…I’ll probably do it). I also keep wondering what will happen if they don’t.

Maybe, as my friend says, in a year, things will be different, perhaps even dramatically different and in a positive way. I hope so. In the short run, it’s hard to look forward to church each Sunday. It isn’t bad. But it could be a lot better.