Paul and Barnabas appeals to the ruling given by the pillars, James, Simon Peter, and John. The newcomers questioned the ruling and the circumstances around it. Did the apostles really mean that the Gentile believers should remain as Gentile believers indefinitely? Surely not! Surely they only intended a grace-period during which the Gentiles could learn Torah. The newcomers raised practical questions:

“Do the Gentile disciples need to keep the commandments of the Torah at all then? Are they free to do as they please? Did not our Master teach us that whoever breaks the least of these commandments and teaches others to do so will be called least? Is it not sufficient for a disciple to be like his teacher? If our Master kept the Torah, should not His disciples keep the same commandments?”

Paul argued, “The whole Torah is fulfilled in one word, in the statement, ‘You shall love your neighbor as yourself'” (Galatians 5:14). He said, “The deeds of the flesh are evident!” (Galatians 5:19). On the other hand, he argued resolutely that those commandments which he styled “works of the Law,” i.e., circumcision and Jewish identity-markers, should not be required from Gentile believers.

Paul and Barnabas seem to have a real problem here and so do we. It has been argued by some that the Jewish “newcomers” who Paul and Barnabas were debating in the Jewish community in Syrian Antioch were correct, at least in part, that the Gentile believers, both in ancient days and in the present, should do everything that Jesus did in living a lifestyle consistent with our Jewish Master as his Jewish disciples. After all, the short definition of a disciple is one who learns from his or her Master through imitation. If we’re not imitating the practices of our Master down to the last detail, how can we be said to be his disciples?

On the other hand, the Jewish people arguing with Paul and Barnabas on this point saw no other way for the Gentiles to be disciples and imitators of Jesus than to become circumcised (the males) and to become full converts to Judaism. In their way of thinking, having Gentiles who were disciples and fully under the “yoke of Torah” was an impossible thought. One was either a Jew or not. There was no middle ground.

Paul was arguing strenuously for Gentile inclusion as disciples without conversion to Judaism, but how was such a thing to be done? The questions brought forth by the “newcomers” are indeed valid. We don’t consider such questions today in most of the church and in some ways, that represents the tremendous “disconnect” between most 21st century Christians and the origins of our faith. We have become unconscious of the “Jewishness” of our very first teachers, the Apostles and the Jewish disciples of our Jewish Messiah. Most of us, when we read Acts 15, interpret the scripture the way we’ve been taught rather than reading what the Apostles were actually saying.

Also, Paul’s argument, as Lancaster presents it, offers another problem. How can you truly reduce the Torah down to a single commandment and how were the Gentiles to enact “loving their neighbors as themselves” without obeying all, or at least very significant portions of the mitzvot and halachah as they were understood in that day? Lancaster separates out the “works of the Law” or “Jewish identity markers” from the larger body of mitzvot, but is that understanding taken directly from scripture or a theological interpretation of the writer and FFOZ? If the Torah could be “reduced” to a single, basic commandment for the sake of the Gentiles, why wasn’t it reduced for the Jewish disciples as well? 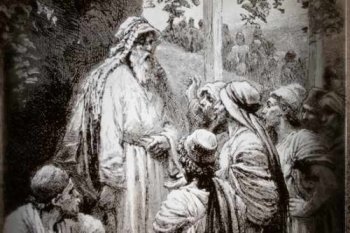 To answer all those questions, we must do what Paul and Barnabas did: take it to the council of Apostles in Jerusalem.

So they decreed that Polos and Bar-Nabba along with some others would go up to Yerushalayim to the shilichim and the elders concerning this question.

–Ma’asei HaShlichim (Acts) 14:2
from an unpublished translation based on Delitzsch

Lancaster’s commentary provides a variety of details about Paul’s and Barnabas’ journey to Jerusalem and the preliminaries about how they were received that I’m not going to discuss, both because of the length and because I have no intention of recreating the full body of Torah Club commentary on Acts 15 here (You can read Vol. 6 of the Torah Club to get the full analysis).

However, Lancaster does present a very handy outline of the Acts 15 problem that I think we should review before getting into the details of the matter.

Luke compresses the arguments presented before James and the Jerusalem Apostles so that they appear very brief, but according to Lancaster, the discussion may have lasted for days, as argument and counter-argument was presented by one side and then the other. The arguments against Gentile inclusion without conversion, using the words of the Master himself, must have been compelling:

The argument, as we read it from a modern Christian perspective, is not without its irony. In today’s church, Jewish people (or anyone else) cannot be saved unless they totally surrender their “Jewishness” and convert to (Gentile) Christianity. The Jewish identity and everything else about what it is to be a Jew, including the Torah of Moses, must be totally excised from the Jewish convert to Christianity. Yet in this hearing before the Jerusalem council, it is being strongly argued that a Gentile (anyone who is not Jewish) cannot be a valid disciple and follower of our (Jewish) Lord Jesus Christ unless he or she totally gives up their pagan ways and their Gentile identity and converts to Judaism.

But then Peter spoke:

And after there had been much debate, Peter stood up and said to them, “Brothers, you know that in the early days God made a choice among you, that by my mouth the Gentiles should hear the word of the gospel and believe. And God, who knows the heart, bore witness to them, by giving them the Holy Spirit just as he did to us, and he made no distinction between us and them, having cleansed their hearts by faith.

Peter is, of course, referring to his encounter with the Roman Centurion Cornelius and his household:

While Peter was still saying these things, the Holy Spirit fell on all who heard the word. And the believers from among the circumcised who had come with Peter were amazed, because the gift of the Holy Spirit was poured out even on the Gentiles. For they were hearing them speaking in tongues and extolling God.

Taken one way, Peter could be saying to the Council that the Holy Spirit destroyed any and all distinctions between the Jewish and Gentile disciples of Messiah, creating “one new man,” and indeed this is exactly what the vast majority of Christians believe today. However Lancaster, reverses this and says that Simon Peter’s argument hinges on the necessity of maintaining a clear distinction between Jews and Gentile believers. According to Lancaster, Peter was not speaking in overly general terms and was specifically describing eligibility for salvation rather than defining legal identity, nationality, or covenantal obligations. Paul seems to echo this in his most famous statement in his epistle to the Galatians.

Applying Lancaster’s understanding of Peter’s statement to what Paul wrote, we then see that Jews and Greeks, slaves and free men, men and women, though different in status, class, nationality, ethnicity, and gender, all have identical access to salvation through Jesus Christ. Discipleship under Messiah doesn’t blur or destroy distinctiveness, including the specifics of Jewish covenant distinctiveness, but it does destroy any barriers between all humans and the salvation of God.

Naturally, this is going to be a lengthy discussion and analysis and Lancaster’s commentary covers a lot of ground, so yes, this the first part of another multi-part series. We’ll pick up with Simon Peter and “the unbearable yoke of the Law” in Part 2 of “Return to Jerusalem” tomorrow.

3 thoughts on “Return to Jerusalem, Part 1”