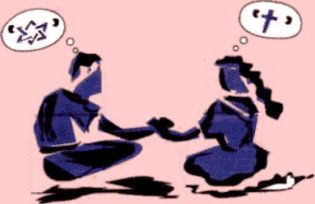 Firstly, I must tell you how impressed I was by your honesty and sensitivity – especially, by what you wrote at the end about not wanting to convert just for him.

Here are my thoughts on the matter.

First of all, even though it is most gracious of you to agree to raise his children as Jews, there really wouldn’t be any point in it, for the children of a non-Jewish mother, (as wonderful as you may be) are not Jewish, even if the father is Jewish. This is the law of Judaism as has been handed down to us generation to generation for thousands of years.

So there is really only one of two choices.

A sincere conversion on your part, or breaking up as difficult as that may be.

From the “Ask the Rabbi” series
“Intermarriage Correspondence from a Non-Jew”
Aish.com

If you’ve been reading my blog for more than a day or two, you know that I often quote from Jewish religious or philosophical sources (and often from Aish.com) to create a foundation from which I then “dovetail” and expand upon to make some sort of daily commentary. As an intermarried Christian (my wife is Jewish), I have an attraction to Jewish thought and perspective as they apply (surprisingly enough) to my faith.

But that doesn’t mean Judaism and I don’t butt heads more than once in a while. The Rabbi’s suggestion to the (formerly) Catholic young woman about possibly marrying her Jewish boyfriend is just one of those “head butting” occasions.

But it’s a difficult discussion. I know the dangers intermarriage and assimilation pose to Jewish continuation and particularly on the children produced in such a marriage. The journey my own children have had to negotiate has not been an easy one and although they all self-identify as Jews (and are Jews according to halachah because their mother is Jewish), they are barely, if at all, observant of the mitzvot. I can’t say that my own home is observant either, through I’d like to support and encourage my spouse to live a more traditionally religious Jewish life. I can’t though, because she is “in charge” of her Jewishness, I’m not.

But when I read the “Ask the Rabbi’s” comment regarding the setting aside of a relationship between a Jewish and non-Jewish couple, I began to see red. My wife and I have been married for over thirty years and I have no intention of disrupting our relationship for the sake of a string of advice, even though it is dedicated to Jewish survival.

Hillel the Sage was able to remain patient even when someone purposely tried to provoke him. He felt no irritation whatsoever about any matter. There was no arousal of anger at all. This is what it means to be completely free from anger.

The level of Hillel is the level we should each strive for as regards to not getting angry. Of course it is not easy. But the first step is to increase your motivation and be totally resolved to conquer anger. Then feel joy with every drop of improvement!

It can be tough enough being intermarried and interfaith without reminders of what could have gone better and how many Jews are less than thrilled about our union. It’s not particularly apparent that we’re intermarried when we’re in public together, but I sometimes get the same feelings that an interracial couple might get when they receive stares from people who disapprove of “mixing the races” (and yes, it still happens). While I understand the perspectives of the Rabbis and realize the pitfalls of intermarriage, this is still my family and she is still my wife and all this is personal, not just some theoretical or theological puzzle to solve.

The irony is that it is because I’m intermarried that I dearly cling to my current perspective on the relationship of believing Jews and Gentiles in the body of Messiah, what we mean to each other, our roles, our understanding of Torah, and who we are in God. I’ve written whole commentaries based on our marriage such as Being Married to the Girl with the Jewish Soul and Cherishing Her Yiddisher Neshamah. Being a couple isn’t just a marital status, it is part of my very identity and woven into the fabric of my being.

This isn’t to say that we don’t argue or that we have a perfect marriage. We aren’t perfect. We get on each other’s nerves and we both have our “moods,” but after over three decades of living together, sleeping together, raising three children together, playing with our grandson together, eating, cleaning, fighting, traveling, and making a home together, we’re together.

Among other resources, I follow Julie Wiener’s (her photo is on the left) In the Mix blog at The Jewish Week. Although I don’t have anything like the same intermarried experience Ms. Wiener and her husband (and children) have, it sometimes helps to realize that not only are there other intermarried couples out there, but that they’re not doing so badly either. Nearly a year ago, Wiener wrote a blog post called Shiny Happy Intermarried People.

Reminds me of when my “In the Mix” column first came out six years ago and a woman wrote to complain that it was bad enough I was writing in The Jewish Week about being intermarried, but the fact that I was happy — and actually smiling in my photo — was truly offensive.

Now, as you can imagine, I took issue with Alina using The Jewish Week as an example of media writing only negative things about intermarriage. Especially because the column she links to is Jack Wertheimer’s, which was a guest column and which I, a Jewish Week editor, responded to on The Jewish Week website, on THIS BLOG, which has as its sole focus realistically depicting intermarried life.

Not that I’m offended or anything, Alina. Just intrigued.

For any of you readers, Jewish or Christian (or anyone else) who are offended that I’m intermarried, have been intermarried for thirty years, and plan to stay intermarried to the same Jewish woman for the rest of my life, I am truly sorry. When we got married, neither one of us were religious and we didn’t give a second thought to what it would all mean ten, twenty, thirty or more years down the road. Maybe we should have, but we didn’t. Who knew?

But we are who we are and while you may complain about us, I insist that you don’t dismiss us. We’re here and we’re real. There are a lot of us and what was done cannot be undone, for good or for ill. Hopefully, we’ll have a seder in our home this year. I plan on going to Easter services at my church for the first time in many years. That may seem like a strange combination or an awful contradiction but it’s not. A Christian/Jewish intermarriage may not be the ideal circumstance and you may not want to experience it yourself. Our intermarriage has its pitfalls and trapdoors, but our marriage and our family isn’t strange or bizarre or bad. It’s just our life and its just who we are.

And God is still her God and my God and what He has brought together let no one tear apart.

Oh, and our thirty-first wedding anniversary is on Wednesday, April 3rd. Deal with it.

17 thoughts on “Intermarriage After Thirty Years”