In that day, the stock of Jesse that has remained standing shall become a standard to peoples — Nations shall seek his counsel and his abode shall be honored.

In that day, My Lord will apply His hand again to redeeming the other part of His people from Assyria — as also from Egypt, Pathros, Nubia, Elam, Shinar, Hamath, and the coastlands.

He will hold up a signal to the nations and assemble the banished of Israel, and gather the dispersed of Judah from the four corners of the earth.

This passage from Isaiah is part of the readings for the last day of Pesach (Passover) which ends at sundown today (Tuesday). For any Christian, the imagery is immediately recognizable as describing Christ, and for a religious Jew, the Messiah is surely appearing here. We see part of the Messianic prophesy and what the King will do upon his return, such as bringing the scattered of Israel back to their nation from the four corners of the earth. He will also be a standard and a banner attracting we from the nations to seek his counsel and to honor his abode, which is the rebuilt Temple in Holy Jerusalem.

The last day of Pesach sends a message of hope to both the Jewish people and all human beings on earth that the Messiah will gather us all to him and he will be our King. Revelation 2:27 speaks of Messiah “ruling with a rod of iron,” which doesn’t sound pleasant, but it shows that King Messiah will have dominion and authority over everything and everyone. The Bible speaks at length about the Messiah and his rule.

While we in the church firmly understand and believe in the Christ, the Moshiach, in the person of Jesus; that he walked the earth once before and will dwell among us again, this has yet to be discovered by many, both Gentile and Jewish. But is can be discovered, just by watching Jesus and listening to him. Even a simple fisherman saw this.

When Jesus came to the region of Caesarea Philippi, he asked his disciples, “Who do people say the Son of Man is?”

They replied, “Some say John the Baptist; others say Elijah; and still others, Jeremiah or one of the prophets.”

Simon Peter answered, “You are the Messiah, the Son of the living God.”

Religious Jews all over the world desperately await Messiah, crying out to him, “How long?” In case you haven’t noticed, the world is a mess and particularly for the Jewish people, and particularly for the Jewish nation Israel, these are very hazardous times. Of course, times are always hazardous for the Jews and for Israel. It seems to be built into the very fabric of their existence that the world will always be against them. That is why it is so important for we Christians to support and uplift them. Many promises have been made about what Messiah will do for his people Israel and if the church isn’t standing for Messiah and for his nation and people Israel, then we stand against them; against Christ, very much at our own peril.

In writing about Moshiach (Messiah), the Rambam states in his Code of Law, Yad HaChazakah : “Whoever does not believe in him or does not await his coming, denies not only [the statements of] the other prophets, but also [those of] the Torah and of Moshe, our teacher, for the Torah attests to his coming, stating: ‘And the L-rd your G-d will bring back your captivity and have compassion upon you.’

-Based on the teachings of the Lubavitcher Rebbe
Rabbi Menachem M. Schneerson for Torah Portion Balak
“The Prophecies of Bilam”
Chabad.org

In honoring the week of Unleavened Bread by eating only matzoh and reading the daily readings for this season, we temporarily draw closer to Messiah and draw him closer to us. The church also celebrates Resurrection Day bringing glory to the risen King and looking to the hope of his return, even as the Jewish people look to his coming.

Our only hope is in continuing to believe that he will come, even as it says in the twelfth of Rambam’s Thirteen Principles of Faith:

I believe with complete faith in the coming of the Messiah. And even though he may delay, nevertheless, every day I anticipate that he will come.

A couple of years ago at this season, I wrote a blog post called Why Don’t Christians Count the Omer? It’s a serious question, since Jews and Christians both share Shavuot, though we in the church call it Pentecost. There’s another reason I ask the question, though. Jews and Christians also share the same desire and the same hope for Messiah, though we understand his specific identity differently. The person is the same person (most Jews will disagree with me, of course) and the hope is the same hope. Given that, why don’t we bind our anticipation together?

Could the Messiah return on Shavuot/Pentecost? There’s no way to know for sure. If he does, then counting the Omer is sort of like a “countdown” for Messiah’s appearance as we anticipate his “coming with the clouds of heaven” (Mark 14:62). 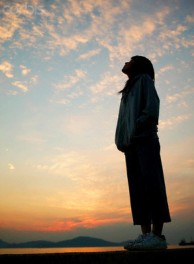 A blogger who has asked to remain anonymous speaks of the Christian appropriation of Judaism and particularly the co-opting of the Seder for the Communion story, but while I share her desire to protect Judaism from Christian misuse, I can’t help but see the parallels. I can’t help but see my Christ and my King in the classic Jewish and Christian texts. The Messiah is there, and for those who believe, we are all waiting for him.

His “face” has been very visible and clear to me this week and I wonder, shouldn’t all Christians be celebrating Pesach, not to steal from the Jews, but to come along side them, joining our hope with theirs? Shouldn’t we also be counting the Omer, not to appear more “Jewish” but to long for the Messiah we see in the ancient Holy texts of Israel?

A bottom line requisite to bring about redemption is to eagerly “await” the Messiah with a genuine burning desire. Whether he comes in our time or, God forbid, not, we are both held accountable and credited for the quest. Nothing stands in the path of willing. We must will, long, yearn, desire, quest, beseech and pray. But as to the actualization of that long awaited promise, we must defer to the unfathomable wisdom of the Almighty.

Rebbetzin Twerski concludes her article by inspiring her readers to be mindful of their actions, always behaving in a manner that pursues Messiah rather than material things, to pray for others, for an end to misery in the world, and an end to the pain of God, who some Jews believe suffers right along with His Creation. And she tells us to hope, yearn, anticipate and have faith.

As it is said, “I believe with complete faith in the coming of the Messiah. And even though he may delay, nevertheless, every day I anticipate that he will come.”

6 thoughts on “He Will Come”