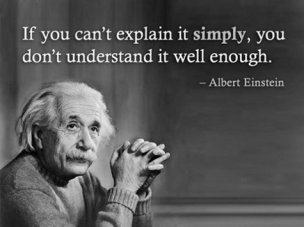 If you can’t explain it simply, you don’t understand it well enough.

According to Rashi, the question is directed against Rav Yirmiyah who had said that the basket in the tree does not actually have to be within ten tefachim of the ground to be valid. We are dealing with a long basket where it could be tilted and emptied even without being brought below into the reshus harabim. In contrast to this, Rav bar Sh’va brings a Baraisa where an eiruv is not valid unless it is actually brought to where it must be situated. Here, we do not take into consideration the fact that the eiruv should be valid due to the potential that it could
theoretically be brought during bein hashemashos to its destination.

I quoted from a commentary on an excerpt from Talmud above to illustrate the level of complexity of the halachot related to Orthodox Judaism. Although I read from the Daf Yomi Digest daily, I scarcely comprehend what I’m reading and what I understand most clearly is that the Talmud is an enormously complex set of works. I don’t know how observant Orthodox Jews manage to obey all of the minute details involved in daily living. I can only imagine that Einstein would have contended with the sages based on his above-quoted statement (though it is unsure if Einstein or Richard Feynman actually said those words).

I can hardly be said to live anything close to an Orthodox Jewish lifestyle in my “observance” as a Christian, but as I write and write and write, and then read back what I’ve written, I realize that I am no closer to truly comprehending God and faith than I was when I first accepted Jesus Christ as Lord. Sometimes I wonder if I’ve even gone that far.

For I do not understand my own actions. For I do not do what I want, but I do the very thing I hate. Now if I do what I do not want, I agree with the law, that it is good. So now it is no longer I who do it, but sin that dwells within me. For I know that nothing good dwells in me, that is, in my flesh. For I have the desire to do what is right, but not the ability to carry it out. For I do not do the good I want, but the evil I do not want is what I keep on doing.

If we’re honest with ourselves as Christians, then I suppose we all have to admit that this statement of Paul’s is also true of us. How can we live a life we call “holy” and yet still struggle with the mundane, the common, and even the evil within us? If God’s Word is written on our hearts, how can we defy that word and pursue what we know isn’t right? I can only imagine that atheists have moral struggles as well, though as I recall myself from before I came to faith, they didn’t seem as dire.

Is a life of faith really that hard or that hard to explain? It certainly seems that hard to live. But then again, is Einstein’s quote the litmus test we should be using against ourselves? After all, he also said this:

If I could explain it to the average person, I wouldn’t have been worth the Nobel Prize.

Einstein made that statement in response to being asked to give a brief quote on why he won the Nobel Prize. That’s the problem with taking quotes out of context. It’s easy to make a person seem completely inconsistent. How much more difficult it is to analyze “chunks” of the Bible and find consistency and comprehension?

My conversations with Pastor Randy (which are on hiatus for the month of April and for several weeks in May) about D.T. Lancaster’s book The Holy Epistle to the Galatians aren’t hugely complex, but they do get detailed…and we’ve barely covered one chapter in Galatians! How about the book of Romans?

I know that Mark Nanos is popular in Messianic circles, but some years ago, when I tried to read his book The Mystery of Romans, I gave up, not getting very far in his book. Maybe I’d be better able to comprehend his writing now, but Paul’s letter to the Roman church is extremely dense with meaning that I wonder if I’ll ever truly understand either Paul or Nanos. I know the Nanos books on Romans and Galatians should be on my “required reading” list, but who knows if they’ll do me any good? I’m tasked to understand a scholar and author in order to understand the mystery of “letter writer.” Are these reasonable goals?

In some ways, trying to comprehend a life of faith is a fool’s errand. While the concept of Christian salvation is supposed to be simple enough for a small child to understand, the fact remains that the Bible contains depths that if plumbed, would make even explorers such as Jacques Cousteau bolt for the surface as if hotly pursued by Leviathan.

Maybe it’s not quite that bad, but I feel that way sometimes.

Of course there’s a difference between understanding a life of faith and living it. Well, maybe not for the Orthodox Jews since behavior and conceptualization are largely interwoven, but certainly for Christianity, where one can live a basic Christian life without having to know much of the Bible at all. You can feed the hungry, visit the sick, remain faithful to your spouse, give to charity, pray to God, and fellowship with other believers without having to spend even a single day in seminary. Of course studying the Bible gives such a life context and meaning, but you don’t really have to know all of the arcane debates about the doctrine of Divine Election, for example.

Don’t get me wrong. I enjoy reading. I enjoy studying. I enjoy discussing all of these little details. But at what point do you turn it all off and just spend time with God? What’s the point of all of our debates on the web? Why do you try to convince me you’re right about something and why do I try to convince you that I’m right about something? What difference does it make? OK, probably a pretty big one, depending on what we’re talking about, but we can’t all be right? Can we all be wrong? That seems far more likely.

If we believe God exists, then He must exist separately from what we believe and from the web of theology and doctrine we’ve spun for ourselves. God must be an “objective” God. If the world’s population stopped believing in God totally and completely, God would continue to exist and His plan for the universe would continue to move forward toward its ultimate conclusion. We spend all our lives examining the Bible trying to uncover the clues to that plan and what it means in our lives, but we only get bits and pieces, and much of the time, we can’t really be sure we understand what we think we’ve got in our hands.

This theologian espouses one particular theory and another theologian opposes him or her. More theories spring up, more debates occur. But God is God. Our theories and debates don’t affect him in the slightest. He exists as He exists regardless of our “religious orientation.”

We’re all seeking truth but even with the help of the Holy Spirit, who is supposed to guide us in all truth (John 16:13), we all come up with different conclusions. You’d think if there were one Spirit and He was guiding us to One truth, we’d all arrive at the same conclusion.

I’m most of the way through Carlos Castaneda’s book The Teachings of Don Juan: A Yaqui Way of Knowledge. It’s not really what I expected, but I appreciate Castaneda’s honesty in saying that he didn’t quite succeed either in his field study or as a disciple of don Juan. I decided to read this book because I hadn’t read any Castaneda before and felt I owed it to myself to have the experience.

Maybe I should just let go and move away from religious and spiritual reading altogether and just read for pleasure (not that reading books on religion and spirituality aren’t pleasurable). I used to read a lot of science fiction and mystery back in the day, with a few of the classics thrown in just for giggles. Maybe that would be more satisfying. Nothing I know or don’t know affects God. I’m not sure it even affects me. I can probably explain simply Castaneda’s book, but how could I possibly explain even one letter of Paul’s? Many have tried, including Nanos and Lancaster, but what does it matter if you end up with a body of work about the Bible that is fraught with disagreement?

I guess there’s a reason people pursue truth all their lives but either never find it or find only what some people (but not all) call “truth.” Maybe we never find it at all. Maybe we just delude ourselves and say what we have is “truth” because living a life of existential uncertainty is too difficult to bear.

Maybe that’s why there are so many atheists. There are no mysteries to the universe beyond what they can see. It’s all nuts and bolts with no colors, textures, or moods. There’s only light and darkness. More’s the pity.

One who returns from the darkness must bring of it with him and convert it to light. He must exploit his experience to surge higher and higher with greater strength.

Therefore, the one who returns from a distance is greater than the one who was always close. What matters is not so much where you stand, but with what force you are moving in which direction.

-Rabbi Tzvi Freeman
“Exploiting the Darkness”
Based on letters and talks of the Rebbe
Rabbi M. M. Schneerson
Chabad.org

So which direction should I move in next in pursuing truth or God or whatever?

16 thoughts on “The Unsimple Truth”