May it be Your will … that You lead us toward peace … and enable us to reach our desired destination for life, gladness, and peace.

-Prayer of the Traveler

Before we take a long trip in a car, we first consult a map to determine the best route. If we know people who have already made that particular trip, we ask them whether there are certain spots to avoid, where the best stopovers are, etc. Only a fool would start out without any plan, and stop at each hamlet to figure out the best way to get to the next hamlet.

It is strange that we do not apply this same logic in our journey through life. Once we reach the age of reason, we should think of a goal in life, and then plan how to get there. Since many people have already made the trip, they can tell us in advance which path is the smoothest, what the obstacles are, and where we can find help if we get into trouble.

Few things are as distressful as finding oneself lost on the road with no signposts and no one to ask directions. Still, many people live their lives as though they are lost in the thicket. Yet, they are not even aware that they are lost. They travel from hamlet to hamlet and often find that after seventy years of travel, they have essentially reached nowhere.

The Prayer of the Traveler applies to our daily lives as well as to a trip.

…see what kind of goals I have set for myself and how I plan to reach these goals.

I can see the point Rabbi Twerski is making with this, but he missed a few things. When the first European explorers were sailing their tiny ships to the west and south across the unknown vastness of the ocean, they had no maps at all to guide them, and even those who went after them probably had maps that were woefully inadequate to the task of surely guiding their voyages. Exploring ships would be gone for years at a time and some of them never came back, making it difficult for those who wanted to follow to repeat their journeys with any sort of accuracy. Sailing uncharted waters doesn’t allow for consulting a map first to determine the best route. It’s a voyage into the unknown. Here be dragons.

I know life isn’t exactly like that but there are similarities. While we can consult our parents and other people whom we feel would be good “guides” for our journey in life, no two people live exactly the same life, so there are going to be “blank spots.” My son David served in the United States Marine Corps and I’ve never been a member of the Armed Forces. Before he entered the Corps and during his service, I had no way to guide him through many of his experiences. Even now that he has been honorably discharged for several years, there are things I can’t relate to because I didn’t live the life he did. Only others who have also served could understand what David went through.

That doesn’t mean my understanding and “sage” advice to him is useless…but there are limits.

Which brings me to the Bible.

I know what you’re thinking. You’re thinking that the Bible is the perfect guide for a person’s life, and that it anticipates every detail for good or bad that we could possibly encounter.

Well, that’s not entirely true (Note: I wrote this before reading a chapter from John F. MacArthur’s (editor) book Think Biblically called “Embracing the Authority and Sufficiency of Scripture,” a photocopy of which was given to me by Pastor Randy…more on that in a later blog post). In the Aish.com Ask the Rabbi pages, someone asked the following question:

How do we know that the Torah we have today is the same text given on Mount Sinai? Maybe it’s all just a game of “broken telephone.”

This is part of the Rabbi’s answer:

The Torah was originally dictated from God to Moses, letter for letter. From there, the Midrash (Devarim Rabba 9:4) tells us:

Before his death, Moses wrote 13 Torah Scrolls. Twelve of these were distributed to each of the 12 Tribes. The 13th was placed in the Ark of the Covenant (along with the Tablets). If anyone would come and attempt to rewrite or falsify the Torah, the one in the Ark would “testify” against him.

Similarly, an authentic “proof text” was always kept in the Holy Temple in Jerusalem, against which all other scrolls were checked. Following the destruction of the Second Temple in 70 CE, the Sages would periodically perform global checks to guard against any scribal errors. 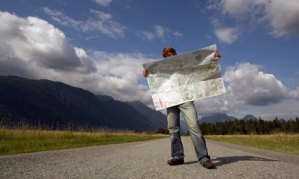 Most Christian and Jewish Torah scholars and academics will likely disagree with this explanation, since it’s based more on Midrash than on historical record or other academic and scientific investigation. The Rabbi also neglects to mention the destruction of Solomon’s Temple and what would have happened to the Ark and the Torah scroll it contained (assuming Midrash is correct and the scrolls ever existed in the first place). When ten of the twelve tribes went into the diaspora, what happened to their Torah scrolls? Do any of those original scrolls exist today? If not, how do we know the level of fidelity of the Torah we have today to those earlier copies (and this is why the Dead Sea Scrolls are such in incredible find because they allow us to check much of our current Bible against much earlier manuscripts)?

Even within the scholarly study of the New Testament, experts such as Larry Hurtado often have differences of opinion with other academics in the field. These aren’t bad people, inexperienced people, or unintelligent people…they are educated believers who are experts in their field, and who, based on their studies, continue to disagree with each other, even on important aspects of the Gospels and Epistles.

That, of course, leads to different conclusions, at least to some degree, on the nature of Jesus Christ and what was being taught to the first century CE Jewish and Gentile believers.

It’s not just having a roadmap and it’s not just having an accurately translated roadmap, it’s interpreting the roadmap in one way or another. It’s also important to remember that interpretation starts right at the first step: translating the ancient text into a language we can understand.

I know what you’re thinking. What about the Holy Spirit? Isn’t the Spirit of God supposed to guide us in all truth and to help us correctly understand the Bible? In theory, yes. In practicality, it doesn’t seem to work out that way. Otherwise, all believers would have an identical understanding of the Bible and that would be that.

So what gets in the way? Our humanity. Our need to be “right.” Our trust in our own intelligence over the trust in God’s “intelligence.” So of all the different Christians and all the different Christian interpretations of the Bible, how do we know who is fully “trusting the Spirit” and who isn’t? Are we just supposed to “check our brains at the door” and let the Spirit “beam” understanding into our skulls?

They think self-surrender means to say, “I have no mind. I have no heart. I only believe and follow, for I am nothing.”

This is not self-surrender—this is denial of the truth. For it is saying there is a place where G–dliness cannot be—namely your mind and your heart.

G‑d did not give you a brain that you should abandon it, or a personality that you should ignore it. These are the building materials from which you may forge a sanctuary for Him, to bring the Divine Presence into the physical realm.

Don’t run from the self with which G‑d has entrusted you. Connect your entire being to its Essential Source. Permeate every cell with the light of self-surrender.

If we are to believe Rabbi Freeman, then God doesn’t expect us to abandon the use of our brains and expect us to just “sense” what the Bible, the world, and everything else means. Understanding and exploring our life is a partnership between the ordinary and the Divine, between man and God.

However, because the trust and faith of a human being is never perfect, then our understanding is never perfect. We fill in the gaps with our own personalities, our own biases, our own intellect, and that’s what has resulted in about a billion different translations and interpretations of the Bible, and thus the differences we experience in our understanding of God…and the differences we experience in understanding ourselves and other human beings. That’s one reason (to use an extreme example) why some believers are completely delighted that NBA center Jason Collins came out as gay and other believers express concerns.

It would seem that while we’re all using the same roadmap, what it tells us is radically different depending on who we are. Taken to an extreme, we can get caught up in revising our understanding of the Bible to the point where we believe we can “reinvent” or “overrule” what it says for the sake of adapting to the current cultural context.

Where does that leave us as travelers on a journey? Are we “lost on the road with no signposts,” or are we making up the road and the signposts as we go along?

36 thoughts on “The Signpost Up Ahead”