This is a continuation of yesterday’s “meditation” on John MacArthur and “Chapter 1: Embracing the Authority and Sufficiency of Scripture” from his book Think Biblically: Recovering a Christian Worldview. If you haven’t done so already, read Part 1 before continuing here.

The rich man’s perspective is the same view of many today who always seem to demand some kind of supernatural affirmation of spiritual truth. They imagine that the straightforward statements of Scripture and the power of the Gospel alone are not sufficient. But the Lord, through the words of the parable, argued otherwise and said that even though He Himself would rise from the dead, miracles are not necessary for the Gospel to do its work in changing lives. Why? Because the Word of God through the inspiration and illumination of the Holy Spirit is powerful enough — it is all-sufficient in what it teaches about redemption and sanctification.

To the degree that the Bible records numerous miracles of God (Moses, the Reed Sea, millions of Israelites walk on dry land but the pursuing Egyptians drown under thousands of tons of water…that sort of thing), apparently they have their uses, but I do agree that miracles alone will not insure faith. If they did, then millions of Israelites wouldn’t have struggled in their trust of God and been condemned to die in the desert after a forty year walk.

Setting that aside, I still have a hard time figuring out what MacArthur believes about the Holy Spirit. Most Christians I talk to pray to God that the Spirit will give them wisdom and understanding in their studies of Scripture, but it almost sounds like MacArthur believes that once the Spirit was done inspiring the Bible’s writers, it split the scene, leaving the book behind and saying, “This is all you need…see you in the next life.”

I know that’s a little harsh and MacArthur, as a self-proclaimed Evangelical, probably does believe in a supernatural God and that there are certain supernatural mysteries we don’t understand right now. But in focusing on the sufficiency of the Bible, I kept getting the feeling that MacArthur was leaving the actual influence of God in our lives out of the equation. I got the feeling from MacArthur that the power of God’s Spirit was only found in the pages of the Bible. If that’s so, why pray? Just read.

I personally don’t think that anyone comes to God without His direct intervention in our experiences. I believe this is true of me. I don’t believe that some human being thumping a Bible and quoting its eloquent words convinced me to become a Christian. I know from my own story that a series of extremely unlikely events occurred over six to twelve months that finally convinced me God was involved in my life.

I had resisted the Word and Will of God for forty years and He finally convinced me…but I didn’t start actually reading the Bible until I was already going to church, and I promise you that I had no idea what I was reading for the first several years. In many ways, I’m still wrestling with God and struggling with the Bible. MacArthur makes it seem as if the Bible were as easy to comprehend and absorb as the latest best-selling fiction novel on the market. For me, the Bible is like living within a riddle wrapped in a mystery inside an enigma (to paraphrase Winston Churchill’s famous statement about Russia). It contains many wondrous things of God, but they are only revealed during the journey of a lifetime.

MacArthur spends the second half of his chapter supporting the sufficiency of the Bible from the point of view of the Torah and the Prophets. He presents a pretty good illustration of Jewish devotion to Torah. I was amazed because everything I know about him (which admittedly, isn’t that much) tells me that as a dispensationalist, he believes the Torah “goes away” after Jesus and is no longer “sufficient” for the Jewish believer.

That was a simple way to summarize the myriad commands God had given Moses. But the law of God — His revealed Word — was and is the one resource for life and godliness. Everywhere they went, the children of God were always to meditate on and apply the words of the living God. Those words were to occupy their attention as a source and centerpiece of everything. For His people, that is still God’s design for life.

MacArthur uses the past and present tense about the sufficiency of Torah twice in the previous paragraph, but I’m not sure he realizes the implications. He’s trying to transfer how he sees the Israelites of the past being devoted to Torah across history to the modern-day Christians and the Bible without explaining that normative Protestant Christianity generally dismisses the vast majority of the Torah.

On page 29, MacArthur says “the law” is the Hebrew word “Torah” (yeah, I know), “which basically means divine teaching“ (emph. mine). In quoting Psalm 19:7 (“The law of the Lord is perfect”), he says that “perfect” can also mean “whole,” “complete,” or “sufficient.” He actually quotes from Psalm 19:7-9 which is part of the Shabbat liturgy in most synagogues, and those words are amazingly beautiful to me.

For pages and pages and pages, MacArthur cites a stream of examples from Judaism about the perfection of Torah, that it is “reviving,” “restoring,” “transforming,” “converting,” and “refreshing.” He speaks of Torah “making the simple one, wise.” He speaks of David praising the “precepts,” meaning divine principles, statutes, and guidelines.” At one point (Pg 31), he states:

The result of applying Scripture’s principles, obeying its precepts, and walking in its pathways is true joy — “rejoicing the heart.”

I wonder if he realized that from a Jewish point of view, it is the performance of the mitzvot, the commandments such as charity, hospitality, and compassion, that “rejoices the heart?” What MacArthur is praising isn’t just the sufficiency of the Bible, but the Jewish worldview (not Christian worldview) of the sufficiency of the Torah, the mitzvot and, for a Jew, the traditions.

If those who claim to follow Christ today were as excited about scriptural precepts as they are about the materialism of this world, the character of the church would be wholly different, and our testimony to the world would be consistent and potent.

Actually, I agree with him, but I’d have changed that sentence to say:

If those who claim to follow Christ today were as excited about scriptural precepts as religious Jews are excited about the Torah and the mitzvot, the character of the church would be wholly different, and our testimony to the world would be consistent and potent.

There were a bunch of other “nitpicky” things I noted about MacArthur’s chapter, but what impressed me the most (as you can probably tell) was how “Jewish” he seems to feel, at least sometimes, about the Bible. I think he’s right that anyone who calls himself or herself a Christian needs to be constantly reading and studying the Bible.

I’ve just started reading John W. Mauck’s book Paul On Trial: The Book Of Acts As A Defense Of Christianity, and Donald A. Hagner in the Foreword says in part:

Just as ministry is the work of the people and not the clergy (who are to equip the saints for ministry according to Eph. 4:11-12), so to the Bible is the book of all the people of God, not the domain of biblical scholars only. Indeed the writings that make up the Bible are meant to be studied by every Christian. The Word of God was written, after all, not to scholars but to the people of God in communities of faith.

I agree and find Professor Hagner’s statement to be wonderfully affirming and empowering. In a number of ways, I agree with MacArthur, but I think he overstates the matter of Biblical sufficiency to the point of being dogmatic and inflexible. It’s as if he leaves no room for discussion and basically says, “It’s my way or the highway.”

I seriously doubt that Moses and Paul had an identical worldview of the Word of God because the world around each of these men was very different. How Torah was understood and applied was based on who each of these men were and what they were trying to accomplish in accordance with their mission from God.

MacArthur, in championing the sufficiency of the Bible, failed to mention needing to understand the original languages of the Bible and especially needing to understand the original contexts, cultures, experiences, and lifetimes of each of the Bible’s authors in order to get a more accurate picture of what they, and God, were trying to say. He failed to mention that how we understand the Bible begins at the level of translation and that the same words and phrases of Scripture can be translated differently, even very differently by different people depending on their biases and worldviews. This is particularly true when comparing Evangelical Christianity and any of the streams of modern, normative Judaism and most pointedly, Messianic Judaism. 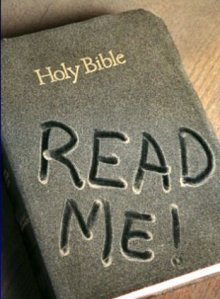 I think MacArthur is right though in that many churches have, for the most part, set the Bible aside as irrelevant or archaic and thus unable to reach the people who are trying to reach God in the twenty-first century. Although I seriously doubt MacArthur intended to give this impression, I think that the mass exodus from “the church” isn’t because it thumps too hard on the Bible but because “the church” all but ignores the Bible. I think this is why at least some Gentile Christians have been transitioning into the Hebrew Roots and Messianic Jewish movements, since both of these movements emphasize the study of and devotion to the Bible and specifically Torah.

If the church could learn one thing from the Hebrew Roots and Messianic Jewish movements, it is the continual reading and studying of the Bible, including reading the Bible as part of worship.

I’m not ready to take every book I’ve ever read except for the Bible, and toss them all into a giant campfire. I don’t think other sources of information are useless. If I want to learn something about a web-based technical support product or how online merchants can fight fraud, I’m not going to find the answers just by reading the Bible (OK, those are pretty far out examples and probably MacArthur wouldn’t expect to find them in the Bible, either, but I’m trying to make a point).

The Bible is the single most important and influential document ever written and the world would not know God without it, but we can learn a great deal by reading and studying other material as well. Learning more in the fields of history and archeology relative to Biblical times greatly enhances what we understand about the Bible itself. I disagree that we must throw all this other “stuff” under a bus in order to rightly state that we are seeking an encounter with God and pursuing a life of righteousness.

I also disagree that the Bible is a simple book. I will spend the rest of my life studying the Word of God, and I don’t expect, at the end of my days, to be hardly anymore enlightened about its mysteries than I am right now. May God grant me the wisdom and understanding to see Him and His will for me somewhere in the pages of His Word.

7 thoughts on “John MacArthur and Struggling with Biblical Sufficiency, Part 2”