Some people believe the 4 spring holidays (Passover, Unleavened Bread, Firstfruits, and Feast of Weeks/Pentecost) were fulfilled in Messiah’s 1st coming and that the 3 autumn holidays (Feast of Trumpets, Day of Atonement, and Feast of Booths/Tabernacles) will be fulfilled at his 2nd coming.

Addendum, August 8, 2013: Derek Leman wrote an excellent blog post building on my theme called Jesus Did Not Fulfill the Feasts. Have a look.

I first talked about anticipating this lesson last week, and confessed feeling somewhat unsettled about facing the sermon and especially Sunday school. As it turned out, there was a mirror operating between Pastor Randy’s sermon and the Sunday School class I attended a few days ago. Both of them provided an image of Jesus “fulfilling” Passover, Unleavened Bread, and First Fruits during his first coming, Pentecost between his comings by the giving of the Holy Spirit, and “fulfilling” the Feast of Trumpets, the Day of Atonement, and Tabernacles when he returns (I’m using the more “Christianized” terms for the appointed times recorded in Leviticus 23).

But in Christian parlance, “fulfilling” something is just another way of saying “terminating.” I came to church on Sunday with my Christian Bible, my Chumash, my Siddur, and a notebook full of paper. In other words, I was “loaded for bear.” I didn’t know exactly what to expect from the sermon, but I was a little surprised to find Pastor Randy taking the “fulfilling” route, although he did stop short of saying that “fulfilling” meant “permanently doing away with.” I was also surprised, given that Pastor lived in Israel for fifteen years, that he used the term “Yahweh” as a substitute for the Tetragrammaton, the four letters in the Hebrew language that represent the most Holy Name of God (which is usually translated in Christian Bibles as “The Lord.”).

Frankly, I’m just stunned that the theology presented by the image I’ve posted titled “Biblical Holidays” (see the chart below) even exists (the chart in this blog post is almost identical to the one in Pastor’s study notes for last Sunday’s sermon). No one seems to be able to tell me where this chart and this doctrine comes from but it obviously is common. I don’t agree with it at all. It reduces the moedim to a set of bookmarks in the Bible that have no intrinsic value of their own but that simply exist to “point to Jesus,” and once they do, they’re history.

Actually, Pastor spent most of his sermon focused on Shabbat and only mentioned the rest of the moedim (eight in all if you include Shabbat) to provide some background. He again emphasized the necessity of a Shabbat (he spoke about Shabbat last week, too) but said that it didn’t really matter what day of the week it is. His Shabbat happens to be on Monday. He also emphasized that it’s the Biblical pattern for providing rest and relaxation, but he didn’t mention that at least for non-Jews, it is also a way to acknowledge God as sovereign Creator (Genesis 2:2, Exodus 20:11).

Certainly Jews take an additional meaning from Shabbat as a sign commandment related to their liberation from slavery in Egypt (Deuteronomy 5:15). While relative to the Ten Commandments, I don’t think Christians are obligated to keep a Saturday Shabbat, there’s nothing really preventing us from doing so (and I can see many advantages for us if we did), but I don’t think it’s just a day of kicking back. Jewish observance of Shabbat emphasizes focus on and devotion to God. While Pastor doesn’t believe that Sunday could ever be his day of rest because it’s the day when he works the hardest, I have to wonder how Rabbis experience Shabbos, since they too are working but don’t have the luxury of assigning Shabbat to a different day of the week.

Don’t get me wrong. I think my Pastor is a terrific guy. He’s intelligent, well-read, well-educated, and a man of God. However, we do have points of disagreement.

After I was done twisting in my seat during the sermon, I confronted something similar in Sunday school. Fortunately, I had the opportunity to talk with the teacher before class began and to express my concerns. That “defused” me enough to reduce all of my questions and comments to just a few. I discovered that no one in class knew that Jews commemorate Shavuot (Pentecost) as the anniversary of the giving of the Torah at Sinai. The linkage between God’s revelation to the Jewish people through giving the Torah at Sinai, and then again much later in history, God’s revelation through the giving of the Holy Spirit, was really new.

I also managed to ask why Christians don’t Count the Omer (Leviticus 23:15-16) and forgot that no one there probably knew anything about it, even though it’s right in the text for the section of Leviticus we’re studying.

I keep forgetting just how different of a Christian I really am.

But actually the best part of the class happened after class. I got to talking to a few folks who were interested in this line of discussion and all of the pent-up “me” that I’d been holding back was able to be unleashed for twenty minutes or so. We finally had to leave when we realized that the lights in the church were being turned out (the place really empties out once classes are over).

I’m still trying to figure out where this theology of Jesus fulfilling certain “feasts” during his first coming and then fulfilling the rest at his second comes from. I found charts similar to the one I posted above only at three websites, none of which seem to be exactly “Christian kosher:”

Pastor is pretty conservative so I’d expect him to rely on conservative Christian sources for his information and graphics, but this one is throwing me for a loop. Where does it come from, who conjured it up, and how did anyone arrive at this “pattern?”

And the book of the prophet Isaiah was handed to Him. And He opened the book and found the place where it was written,

“The Spirit of the Lord is upon Me,
Because He anointed Me to preach the gospel to the poor.
He has sent Me to proclaim release to the captives,
And recovery of sight to the blind,
To set free those who are oppressed,
To proclaim the favorable year of the Lord.”

And He closed the book, gave it back to the attendant and sat down; and the eyes of all in the synagogue were fixed on Him. And He began to say to them, “Today this Scripture has been fulfilled in your hearing.”

I must be mistaken though, because I don’t see the mapping between the Luke 4 passages and the three festivals cited in the diagram. Here’s the larger section of Isaiah 61:

The Spirit of the Lord God is upon me, Because the Lord has anointed me To bring good news to the afflicted; He has sent me to bind up the brokenhearted, To proclaim liberty to captives And freedom to prisoners; To proclaim the favorable year of the Lord And the day of vengeance of our God; To comfort all who mourn, To grant those who mourn in Zion, Giving them a garland instead of ashes, The oil of gladness instead of mourning, The mantle of praise instead of a spirit of fainting. So they will be called oaks of righteousness, The planting of the Lord, that He may be glorified.

Then they will rebuild the ancient ruins, They will raise up the former devastations; And they will repair the ruined cities, The desolations of many generations. Strangers will stand and pasture your flocks, And foreigners will be your farmers and your vinedressers. But you will be called the priests of the Lord; You will be spoken of as ministers of our God. You will eat the wealth of nations, And in their riches you will boast. Instead of your shame you will have a double portion, And instead of humiliation they will shout for joy over their portion. Therefore they will possess a double portion in their land, Everlasting joy will be theirs. For I, the Lord, love justice, I hate robbery in the burnt offering; And I will faithfully give them their recompense And make an everlasting covenant with them. Then their offspring will be known among the nations, And their descendants in the midst of the peoples. All who see them will recognize them Because they are the offspring whom the Lord has blessed.

I stopped copying and pasting after nine verses because I can’t see the mapping. I wanted to be thorough, but I can’t see a connection between this and the various “feasts” that are supposed to be fulfilled. 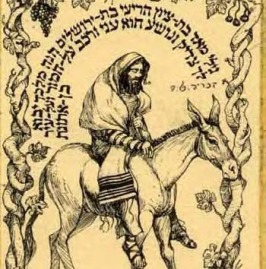 My Sunday school teacher offered a more simple explanation. Christ was crucified on Passover, was buried during the Unleavened Bread festival (which may not be true since he was buried before sunset…if he died on Pesach, it was still Pesach when he was buried), and rose as First Fruits from the dead. I’m sorry, but that seems like a pretty thin set of connections upon which to build an entire doctrine. Did I mention that the Feast of Trumpets is supposed to symbolize the Rapture, the Day of Atonement is supposed to symbolize the Return and Final Redemption, and Tabernacles is the Millennial Reign of Christ?

I can sort of see how some Christians might make those kinds of associations, but I have never, ever read any Jewish commentary that said the Messiah’s coming somehow “fulfills” any of those things. From a Jewish point of view, the Messiah comes, defeats Israel’s enemies, returns the exiles to their Land, restores Israel as the head of nations, rebuilds Jerusalem and the Temple, re-institutes the Temple service with Levitical Priests, and rules over Israel and the rest of the nations as King, establishing world-wide peace and tranquility.

It’s all pretty straightforward really with no theological hoops to jump through. Messiah does what he was expected to do back in Acts 1:6 and what Jewish people throughout history have been waiting for Messiah to come and do for thousands of years.

This week was the first of an eight-week series of sermons on Leviticus 23 that Pastor will be giving. Sunday school will be taking a different direction during those weeks, but I have a feeling I’ll be challenged at church for the next couple of months between how Pastor sees the function of the moedim and how I do. Fortunately, as I mentioned before, this did inspire an interesting conversation after class. I’m hoping that I’ll be able to share a little more about who I am and how I see things, not because I think I’m such a big deal, but because I just can’t help but believe there is a lot more to the Bible than what many Christians get out of it. I’d like the opportunity to offer a different perspective and ideally, a paradigm shift.