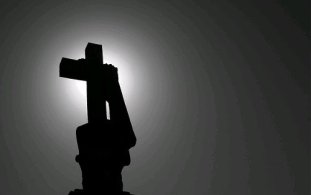 The eye sees, and the heart desires.

People cannot help when an improper impulse comes to mind, but they certainly can stop themselves from harboring the thought and allowing it to dominate their thinking. Yet, sometimes one may be responsible even for the impulse itself.

While some impulses are completely spontaneous, others arise out of stimulation. If a person reads, hears, or sees things which can provoke improper thoughts and feelings, he or she is then responsible for the impulses that are the consequences of that reading, listening, or observing.

This concept is especially important in our era, when not even a semblance of a code of decency exists as to what may or may not be publicly displayed. All varieties of media exploit our basest biological drives.

Given the interpretation of the right of free speech under which such provocative displays occur, the government has no way to restrain them. However, each person has not only a right, but also an obligation to be his or her own censor. No one has to look at everything that is displayed nor hear everything that is broadcast. Those who fail to exert their own personal censorship are tacitly stimulating immoral impulses, and for that alone they are liable.

…try to avoid looking, hearing, and reading things which can have a degenerating effect.

I know that Rabbi Twerski was thinking of something else entirely, but when I consider trying to avoid exposing myself to things that have a “degenerating effect,” I have to include the world around me, including the world of “religion.” Well, “degenerating” isn’t the right term. “Discouraging” is.

Although you won’t read this until Sunday morning, I’m writing this on Thursday in response to my Wednesday night meeting with my Pastor. We were supposed to be discussing Chapter 8 in D. Thomas Lancaster’s book The Holy Epistle to the Galatians, but we got sidetracked on a few things.

I bring up the book because of my Pastor’s response to it. He told me that he was having difficulty accepting some of Lancaster’s assertions early on in the book out of concern that if he assented, he would end up traveling down a trail he didn’t agree with. That’s how I felt last night as Pastor and I talked about salvation, Jewish people, and the future of Judaism and Torah. I felt like I was being led to agree with doctrines that I wasn’t comfortable with but didn’t know how to refute. In going over the little pamphlet about Baptist Distinctives (that is, what makes the Baptist church different from all other churches), I could feel myself being tugged down the “garden path,” so to speak.

I ended our meeting by stepping out of the bowl of alphabet soup, all the letters and words of denominational doctrine and distinctives, and exploring actual experiences and relationships.

I’ve often imagined what it would have been like to live in the late Second Temple period in Jerusalem. What would it have been like to go into the Court of the Gentiles at the Temple. How many people would be there? Who would I see? What would the air smell like? Then, I’d humbly kneel and pray to Hashem. This close to the actual “house of prayer for all peoples,” would I feel the tangible presence of the God of Israel? Would I hear the songs of the priests ministering in the inner court? 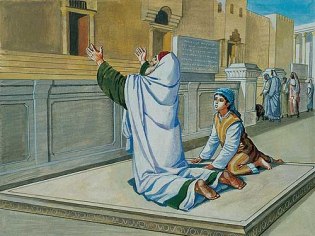 I’ve often imagined what it would have been like to be one of the non-Hebrew shepherds tending the flocks of Abraham in Canaan. In the heat of the day, I watch him in the distance, studying his mannerisms and appearance, knowing that this is a man, among all human beings, who has spoken to God “face to face.” In the evenings after a meal, around the fire, would he teach us of his God? What would he tell us about a relationship with Him? How does one pray to the God of Abraham as a humble shepherd? In blessing Abraham, would I be blessing God and also myself? What a hard and yet simple life, living close to a prophet and to the One God.

We read “Bible stories” about “Bible characters” as if reading morality fables or fairy tales. We “know” that they’re real, but do we? It’s just words on a page. Does “Biblical inerrancy” result in forgetting that Abraham was and is a real human being? Do we discount the moments of his life we don’t find in the Bible but nevertheless, moments that must have occurred? When, in reading the Bible and praying, do we allow Abraham to stop being a work of “fiction” and become a living, breathing, talking, experiencing human being?

But the systems totally ignore awe, majesty, terror, magnificence, and everything else everyone from Abraham in Canaan to a lowly, nameless goy in the Court of the Gentiles would experience in a living, breathing, bleeding, authentic, moment-by-moment encounter with God; the sights, sounds, smells, touches, tastes, thoughts, feelings, and dreams of actually being there instead of just reading the Bible and especially instead of filtering the Bible and everything else through religious systems that so very much remove us from authenticity and the jarring, electrifying, naked connection to our Creator.

I tried to explain how I thought that Jews and Gentiles both are a part of the unified body of Christ and yet the Jewish connection to the Sinai covenant and its conditions, the Torah, are not undone by that unity. I drew a diagram, which I’ve reproduced below, to explain my thoughts. “But the Jewish people haven’t accepted Christ, so they can’t be saved,” he says (I’m paraphrasing). “Not just faith in ‘a Messiah’ but ‘The Messiah,’ in Jesus,” he says (I’m paraphrasing again).

Something’s wrong. I’m agreeing to things I’m not sure about. My Pastor is so sure of so many things that I think we can only see through “a glass darkly,” and that exist as much in the realm of God as they do in the material world. I don’t know how to explain it, so it’s difficult to know what to say. 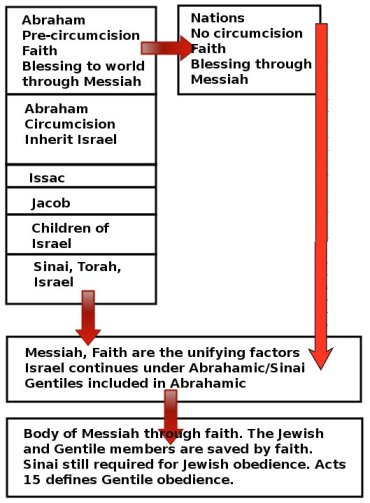 And there are so many other people who seem so sure about unsure things. I suppose it shouldn’t have surprised me that U.S. Army PFC Bradley Manning, just one day after being sentenced to 35 years in Federal Prison for releasing 700,000 secret military documents to Wikileaks, should come out as transsexual and declare that he wants to live the rest of his life as a woman, obviously changing how prison will be “applied” to Manning.

Religious systems. We craft them saying that we see their foundations in the Bible. But we craft them to say whatever we believe is important to us, and thus they reflect the political and social agendas and imperatives of the occupants of these systems. Extracting religious systems from the Bible is supposed to be guided by the Holy Spirit, but because human beings are involved, they end up dramatically contradicting each other, sometimes (often?) based on generational changes in attitudes.

I’ve mentioned before that I don’t think I’d make a good Baptist, not because I have anything against Baptists per se, but because I don’t think any denomination or modern religious stream, old school or new, holds all the keys and unlocks all the doors.

I know they think they do. They all think they do. But being an outsider, I can see a different perspective. I can see lots of perspectives, and none of them make a lot of sense. Pastor pretty much agrees with what he reads in Thomas Schreiner’s book 40 Questions About Christians and Biblical Law and I can barely stand a single thing Schreiner wrote.

Pastor is also reading Rudolph’s and Willitts’s book Introduction to Messianic Judaism: Its Ecclesial Context and Biblical Foundations. He’s just finished the chapter written by Scott J. Hafemann, “The Redemption of Israel for the Sake of the Gentiles” and he likes it very much. I’m going to re-read it to refresh my memory of the text. What did the Pastor see in this chapter that we can agree upon?

Can there be a peace? Or is the only peace in the presence of God and to heck with the systems?