Episode 08: The gospel message of Jesus is often simplified down to believe in Christ and your sins will be forgiven and you will go to heaven when you die. In episode eight this common misconception will be challenged. Viewers will discover that the main message of the gospel is one of repentance and entering into the kingdom of heaven. The kingdom of heaven is not the place we go to when we die but rather God’s kingdom coming down here on earth. The gospel message is about preparation for the Messianic Age.

-from the Introduction to FFOZ TV: The Promise of What is to Come
Episode 8: The Gospel Message

The Lesson: The Mystery of the Gospel

This episode seemed to cover a lot of previous material, not in the details, but in the theme. It is most closely related with Episode 1: The Good News since gospel means good news. There’s also a close link to Episode 7: Exile and Redemption and Episode 8: Ingathering of Israel. The television series now seems to be stringing individual episodes together to paint a much larger panoramic picture of the prophecies about and the coming of the Messianic Era.

The definition of the gospel message of Jesus is actually really easy to find:

FFOZ Author and Teacher Toby Janicki tells us that Jesus was just beginning his ministry at this point and that these verses provide us with the first clue in solving the Mystery of the Gospel:

Clue 1: The Gospel Message means we should repent for the kingdom of Heaven is at hand.

But what does that mean exactly? What is the “Kingdom of Heaven” and what is “at hand?” The phrase “at hand” is sometimes also translated as “near”. Jesus was saying to his listeners that they should repent because the Kingdom of God or the Kingdom of Heaven was really close and about to happen or occur.

Jewish people in the late Second Temple period, particularly because their nation was occupied by the Roman Empire, were especially waiting for the Kingdom of Heaven to arrive and to their ears, it certainly was good news or the gospel message that Jesus was preaching. It was a message that we find repeatedly in the Gospels.

Now in those days John the Baptist came, preaching in the wilderness of Judea, saying, “Repent, for the kingdom of heaven is at hand.”

We also find examples of this message in Matthew 4:17 and Matthew 10:7. But we also find that the good news is sometimes referred to as the “Kingdom of God” while other times, it’s the “Kingdom of Heaven.” Toby tells us that the term “Kingdom of Heaven” is closer to the correct phrase in Hebrew. The word translated as “Heaven” is the Hebrew word “Shamayim.” Does that mean that Jesus was talking about Heaven, where God is and where we’re going to go when we die?

Not according to the Jewish understanding. That’s not how Jesus’s disciples and listeners would have interpreted his message.

The scene shifts to FFOZ Teacher and Translator Aaron Eby in Israel for a better understanding of “Kingdom of Heaven” or in Hebrew, “Malkut Shamayim.”

“Shamayim” can mean just “sky” in Hebrew, but that’s not how it’s understood in the phrase “Malkut Shamayim.” Aaron explains the concept of circumlocution, or avoiding using the Tetragrammaton, the most Holy and personal name for God, the name God revealed to Moses at the burning bush. Jewish people use many other names for God to avoid the offense of taking His most holy name lightly. Names such as “Hashem,” “Holy One,” “Creator,” or “Our Father.”

Another circumlocution for God’s most holy name is “Shamayim” or “Heaven.” You see it often in Talmudic writings, but it’s even in the Bible.

And in that it was commanded to leave the stump with the roots of the tree, your kingdom will be assured to you after you recognize that it is Heaven that rules (emph. mine).

Daniel, using the Aramaic equivalent of “Shamayim,” is not saying that literally Heaven, a place, rules, but that God rules. He was merely using a circumlocution for God’s most holy name. 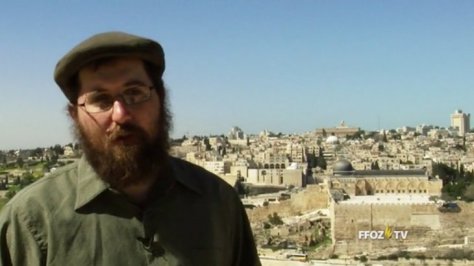 Aaron tells us that the phrase “Kingdom of Heaven” isn’t God’s Kingdom that is located in a place called Heaven, but it actually means the rule and dominion of God on Earth.

Why do we then sometimes see this phrase rendered “Kingdom of God?” In the thoughts of the gospel writers in Hebrew, they would have used “Malkut Shamayim,” but then translating that phrase into Greek, what words should they have used? Matthew, who was writing primarily to a Hebrew speaking Jewish audience, chose to translate the Hebrew phrase literally as “Kingdom of Heaven.” However, Mark and Luke, who were writing primarily for Greek speaking Jews and non-Jews, translated the phrase idiomatically as “Kingdom of God.” Either way, they were saying the same thing.

Back to Toby and the studio, we have our second clue.

Clue 2: Kingdom of Heaven is not Heaven in the sky but God’s rule and reign on Earth.

Look up the Lord’s prayer and you’ll even find it in how Jesus taught his disciples to pray.

What is God’s rule on Earth? The Messianic Era. The time when Jesus will return and establish his rule as King in Jerusalem, establishing an age of peace, not just in Israel but in the entire world.

Toby solved most of the mystery, but one more clue is needed to answer a final question. Why is the Messianic Era good news?

Isaiah 11:1-4 tells of the prophesy that King Messiah will indeed rule Israel and the world from his throne in Jerusalem. Isaiah 11:6-8, 10 further tells us that Messiah’s reign will be one of complete and total peace. The portrait of such peaceful animals is poetic language describing such a peace. Complete tranquility and bliss, such as was experienced in Eden, long before there was any such thing as war and strife among human beings.

And when such peace comes upon all the earth from Israel, the Gentiles in the nations of the world will see and they will repent and turn to God, inaugurating an age of total, worldwide revival.

But it won’t be totally peaceful:

Then it will happen on that day that the Lord will again recover the second time with His hand the remnant of His people, who will remain, from Assyria, Egypt, Pathros, Cush, Elam, Shinar, Hamath, and from the islands of the sea. And He will lift up a standard for the nations and assemble the banished ones of Israel, and will gather the dispersed of Judah from the four corners of the earth.

They will swoop down on the slopes of the Philistines on the west; together they will plunder the sons of the east; they will possess Edom and Moab, and the sons of Ammon will be subject to them.

We see that Messiah ingathers the exiles of the Jewish people from all the nations of the world and returns them to live in complete peace in their Land, in Israel. God Himself delivers justice to all the nations who have been enemies of Israel, vanquishing them, thus insuring Israel’s continual peace.

Now we have the final clue:

Clue 3: Kingdom of Heaven is about Messiah’s reign on Earth.

Toby recaps the lesson, summing up the three clues and solving the mystery. He describes a time when the Jewish people will live under their King in peace and return to the Torah, the law of God. I can only hope that future episodes will flesh out how this actually works relative to both Jewish and non-Jewish people, but that wasn’t the point of the episode.

As I mentioned before, a lot of this material was addressed from other perspectives in previous episodes and I’ve learned about it from other sources as well. What Toby didn’t mention was that, by Jesus teaching that he was the fulfillment of Messianic prophecy and calling the Jewish people to repentance as preparation for the soon to arrive Kingdom of Heaven, it explains why the apostles and his disciples were so incredibly devastated when he was crucified. All of them were expecting that he was going to overthrow the Romans at any minute and assume the Throne of Israel as the promised Messianic King.

When he died, it must have seemed as if they were completely mistaken about him, that he couldn’t have been the Messiah, that he must have been just another of a long line of pretenders to the throne who came before him. It’s how most Jews see Jesus today, another would-be Messiah among the many who have since come and gone in Jewish history.

But then, when he was resurrected, so was hope, only there’s a problem of sorts:

So when they had come together, they were asking Him, saying, “Lord, is it at this time You are restoring the kingdom to Israel?” He said to them, “It is not for you to know times or epochs which the Father has fixed by His own authority; but you will receive power when the Holy Spirit has come upon you; and you shall be My witnesses both in Jerusalem, and in all Judea and Samaria, and even to the remotest part of the earth.”

Given that Jesus had said, “The Kingdom of Heaven is at hand” or “near,” once he was resurrected, it made perfect sense to his disciples that he was now ready to ascend the throne. Except he didn’t. He left instead and the disciples waited.

“Truly I say to you, there are some of those who are standing here who will not taste death until they see the Son of Man coming in His kingdom.”

Many believed, based on these words of the Master, that although Jesus wasn’t going to immediately establish his kingdom, it would be within a human lifetime, just a matter of decades. But when the last apostle, John, died of extreme old age, sometime in the last years of the first century CE, the disciples must have felt a keen disappointment again. Messiah had not come to restore his kingdom. Where is he? How long, O’ Lord, how long?

I generally don’t mention this in my reviews, but at the very end of each episode FFOZ President and Founder, Boaz Michael appears on camera to give the audience a brief peek at the next episode. At the end of this episode, Boaz explained that the next episode would pick up the same theme and describe more in detail the process of repenting to prepare for the kingdom and to believe. But Jesus didn’t say “believe in me” he said “believe in the gospel.” What does that mean?

It’s the mystery for next week.