No matter what the content, the fact that there are classes for Intermarried couples is a progress , because it is a doorway to observance and making a Jewish home, and even conversions. Sometimes it is the non-Jewish spouse who brings the Jewish partner back to Judaism so they need to be given a chance. This is different from being lenient about intermarriage. Since a lot of Jewish observance is done at home eg. Shabbat , people can be introduced to it and be encouraged because of the wonderful effect it has on family life, would be a good place to start with.

-Anonymous
Comment found on “What to Do about Intermarriage”
Aish.com

A lot of Jewish articles about intermarriage are difficult for me to read because many sound like “The goyim are bad for marrying Jewish men and women and causing them to assimilate.” Harold Berman’s article was much more refreshing, but Anonymous’s comment really hit home.

Sometimes it is the non-Jewish spouse who brings the Jewish partner back to Judaism so they need to be given a chance.

My daughter just returned from Israel a few days ago after spending nearly two weeks in the Land participating in the Birthright Israel program. While she was gone, one Friday afternoon, my wife got out the Shabbos candlesticks (sans actual candles). She didn’t light the candles, but she didn’t want me to put them away after Shabbos, either. They’re still sitting on our counter waiting and have been for two Friday evenings now, after gathering dust in our bookshelf for months.

Through casual conversation, I found out that my wife took our grandson for a visit to the home of the Chabad Rabbi and Rabbitzin. It came up when we were talking about a new Lego toy my wife bought our grandson, which was the result of him playing with the Rabbi’s children (I guess they’re heavily into Legos). Yesterday afternoon, my wife wasn’t home, but since she didn’t have to watch our grandson that day, I thought she was off doing errands and visiting friends. I was right, but not in the specifics. She’s spent the afternoon helping the Chabad Rabbitzin do some cooking. There was a hint that she might be planning on helping with some of the food preparation for the High Holidays as well.

I couldn’t be happier. Well, yes I could. I’m delighted that the missus is becoming more involved with the Chabad community again. Actually, for all I know, she never stopped, but she stopped talking about it. I’m glad that part of her life is becoming more overt again. I keep wondering if she’s simply wishing that I would quit church and become more interested in Judaism.

It’s not like I didn’t try. After leaving my previous congregation, I suggested and hinted and finally asked about the two of us participating together in the Jewish community. Eventually it came out that it would be too embarrassing to have her “Messianic” husband meet with her Jewish friends. I guess a Christian husband is equally humiliating for her.

Welcoming is critical. But it’s not enough. And the question “how can we be welcoming” is the wrong starting point. Instead of asking how we can welcome interfaith families, we would serve them better by asking how we can help them transform themselves through Jewish life. Welcoming, without more, is simply a technique to get people in the door. But Jewish transformation goes to the heart of our passion and purpose as a people.

Helping intermarried families feel comfortable may encourage them to enter our doors. But it won’t help them grow. And it may not even convince them to stay. To be sure, being welcoming and effecting Jewish transformation is hardly an either/or equation, and notable examples of doing both well can be found. But the communal starting point is nearly always one of welcoming, hardly ever one of transformation, and in the meantime, the majority of intermarried families are either unengaged or under-engaged in Jewish life.

I’ve met intermarried couples who joined a synagogue because they were made to feel comfortable.

But I’ve never met an intermarried couple (or in-married, for that matter) who got excited about Jewish life, who gave their kids a rich Jewish education, who chose to become a Jewish family, simply because they felt comfortable. In virtually every case, they encountered a gifted Jewish teacher, had a meaningful experience in a service, or found that Judaism spoke profoundly to their worldview. 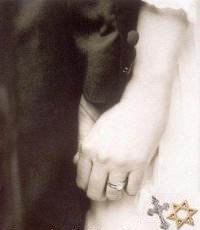 Notice the first paragraph I’m quoting from Mr. Berman’s article says “interfaith” families, not just “intermarried.” Intermarried simply means that one member of the couple is Jewish and the other is Gentile but not necessarily religious (particularly Christian). Interfaith implies that the Jewish member is religiously Jewish on some level and the Gentile member is affiliated with another religion (probably Christianity).

The direction in which the article travels leads to not just welcoming interfaith/intermarried couples in the synagogue, but the drive to help them transform into Jewish families.

Another person commenting on the article said:

One cannot simultaneously believe that the Messiah has come & believe Ani Ma’anim with perfect faith in the coming of Moshiach. Raising children with nothing is nothing. Make a choice, give your child roots (whatever they are) so she IY”H can have wings.

Here we start moving into potentially hazardous territory. What happens to the Christian member of the marriage if the goal of welcoming interfaith/intermarried couples into Jewish life is to create Jewish families?

I know from a Messianic Jewish point of view what the answer could be but that doesn’t play if the Jewish person in the marriage does not have faith in Jesus as the Jewish Messiah.

My wife would never ask me to abandon my faith. I’ve considered saying I could cease all outward signs of my faith if it would help her to return to the synagogue and become more involved in Jewish community (I stop short of offering to abandon all internal signs of my faith), but first of all, I know she would decline, and second of all, it’s still a dangerous step for me to take.

And we’re not raising children. My youngest is twenty-five so as adults, my children are all responsible for their relationship with God and who they are (or aren’t) as Jews. The window of opportunity my wife and I had to instill a strong Jewish identity in our children has long since slammed shut. 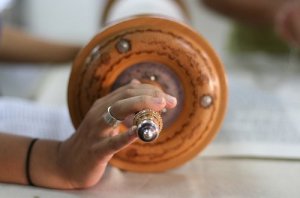 I want my wife and children to become as involved with the Jewish community, with the Torah, with the mitzvot as they want to be and in fact, as involved as God wants them to be. I would be more than happy to “go along for the ride,” so to speak, though as I said before, my presence would make my wife highly uncomfortable. I always come up against the same walls when I face being intermarried and I don’t know how to get over, around, or through them. No one in my church could understand and they’d probably be offended that I’m praying for my family to be more Jewish rather than for them to convert to Christianity.

But to the rest I say, not the Lord, that if any brother has a wife who is an unbeliever, and she consents to live with him, he must not divorce her. And a woman who has an unbelieving husband, and he consents to live with her, she must not send her husband away. For the unbelieving husband is sanctified through his wife, and the unbelieving wife is sanctified through her believing husband; for otherwise your children are unclean, but now they are holy. Yet if the unbelieving one leaves, let him leave; the brother or the sister is not under bondage in such cases, but God has called us to peace. For how do you know, O wife, whether you will save your husband? Or how do you know, O husband, whether you will save your wife?

I wonder if there’s an adaptation of Paul’s midrash on “intermarriage” that says the Christian husband can save the Jewish wife by leading her to be more Jewish? Probably not, but it’s a nice thought.

There’s an emphasis in certain corners of Messianic Judaism in general and in the First Fruits of Zion (FFOZ) ministry in specific that believes strongly that we Gentile Christians exist to provoke the Jewish people to zealousness in the mitzvot and a return to the Torah. I’ve come to believe this as well.

I just need to know how…or maybe the only answer is just for me to stay out of my wife’s way and let her do what she’s going to do. Maybe it’s just a matter letting go and trusting that God knows what He’s doing.

18 thoughts on “Encouraging a Jewish Wife”